NIGERIAN CYBERCRIME-WHO IS THE NIGERIAN PRINCE?1/3 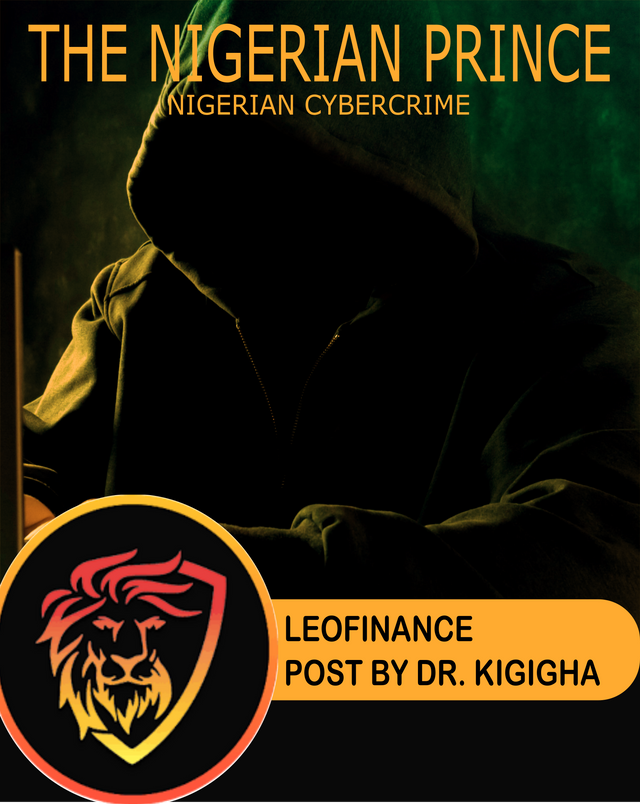 If you were active on the internet a decade ago or the years preceding that, you might have gotten a message from someone explaining that he is a Nigerian prince and that he needs money to reclaim his father’s wealth from his uncle who left his family with nothing.
While this is a touching story and I am not questioning its validity, I am however saying that it is more than likely that the person who sent you that message might have been in a room with a laptop forwarding this message to anyone who would feel sympathy for him or her.
There was no dead king, no wicked uncle, no prince and so there is more than likely no need to send your money to that person.

MODERN TIMES
Our society has evolved to be more dependent on the internet from communication to business the internet’s benefits are numerous. With these numerous advantages and benefits came a problem that I do not foresee an end to. This problem is cybercrime and it can be used to describe any fraudulent or criminal activity done with the computer. The terms used in place of cybercrime are theft, fraud, forgery, embezzlement, or 419 (in Nigeria) which involves the internet. Cybercrime includes downloading music files or movies, spam mailing, and others.

Cybercrime is historical, it was first published in the 1960s that an employee committed a crime with a mainframe computer, probably stealing information from it. This however is called a computer crime, not a cybercrime, but it lets you know the genesis of the problem. It is not a problem with computers themselves, it is an intrinsic human problem to develop ulterior means of making things better for himself other than the norm.

FACTORS IN NIGERIA THAT ENCOURAGE CYBERCRIME
As we have seen cybercrime is any crime that can be committed with the aid of a computer such as phishing, email scams, hacking, website spoofing, social medical page hi-jacks, and others. What are the triggers that might have led to Nigerians being more prone to committing these crimes? In addition to the population in the country, there is also the issue of unemployment. Recently Joblessness rose by 33.3% as studied by the Nigerian Bureau of Statistics. There is also in addition a very strong taste for wealth in Nigeria. In Nigeria, there are very weak laws against cybercrime and there is incompetence in the justice system. These factors make Nigeria the likely suspect for cybercrime from Africa.

EFFECTS OF CYBERCRIME
Generally speaking, there is a strong distrust for Nigerians in the online community because of the strong suspicions of illegal activities. This has for years made start-ups for business hard and in addition, there is a fear foreign investors have for the country making them less likely to invest. The individual who falls victim to cybercrime lose their money, their identity, intellectual property, confidential information, and the damages are usually on elderly citizens and vulnerable parts of the population. In Nigeria, the loss to cybercrime is speculated to have totaled about $649 million in 2017 and $800 in 2018.

WHAT IS BEING DONE?
Many countries are worth emulating and have been successful at reducing cybercrime. Singapore has an Anti-Scam Centre that was set up by the police and works with the major banks. The Anti-Scam Centre interferes with the operatives of scammers by slowing bank transfers. In about two months the Anti-Scam center freed 815 bank accounts and got back 35% of the amount lost which is a significant amount when compared to other types of scams. Canada has a similar Anti-fraud Centre that gathers information and criminal intelligence on cyberattacks.

The Canadian Anti-fraud Centre gathered over 50,000 fraud reports from individuals and organizations and the cost was close to $100,000. It is believed that less than 5% of individuals send reports of fraud which makes it difficult to do proper research on the types of cyberattacks experienced.

In Dubai, the Financial Services Authority started a cyberattack intelligence in collaboration with the Dubai Electronic Security Centre and corporations. This is supposed to encourage information exchange and offer solutions to cyber threats.
Nigeria needs an integrated discussion about the solution to cybersecurity as its effects are widespread.

CONCLUSION (THE FUTURE OF NIGERIA)
Based on the crimes reported and studies done, it is found that 95% of cybercrimes are not reported. As Nigeria goes closer to a digital economy joining the world in building a cashless society, cyberthreats will only become more prevalent. Individuals, organizations, the government, and aid from the international community will be important to tackle this threat. Increased awareness of the problem and the manner in which these criminals operate will help in addition to improved individual security, the establishment of centers against scams. A risk-based cybersecurity framework was made by the Central Bank of Nigeria with its guidelines for bank deposits and payment services.