Welcome to our beginner guide for DCITY. Those that are interested in this post are going to be those people that want to start playing DCITY, or maybe have started but want more information on how to manage, optimize and make decisions on the margin. 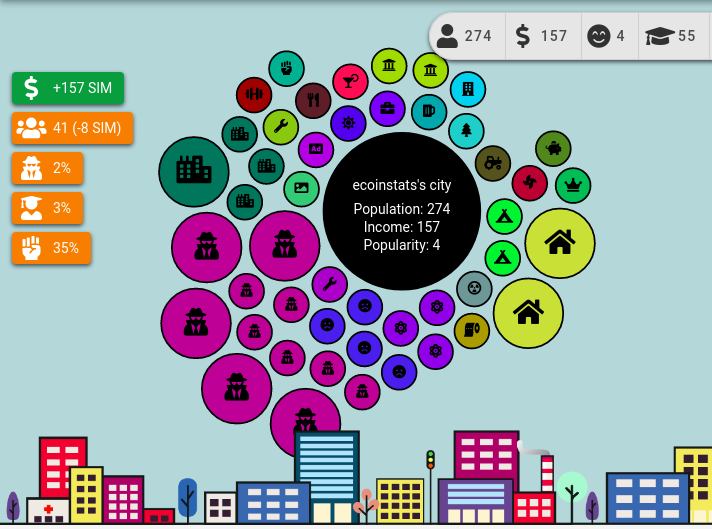 Now with the release of 2nd edition cards, there is more strategy, more moving parts, and even more stats on the homepage. We will cover each of them here.

First, we should mention how to buy cards. There are two ways, the first is to send 4 HIVE or 800 sim to @dcitycards, no memo for first edition and memo: new for second edition. The maximum order size is 10 cards, or 40 HIVE/8000 SIM. The second way is to buy cards on the internal market, which we will discuss further down. 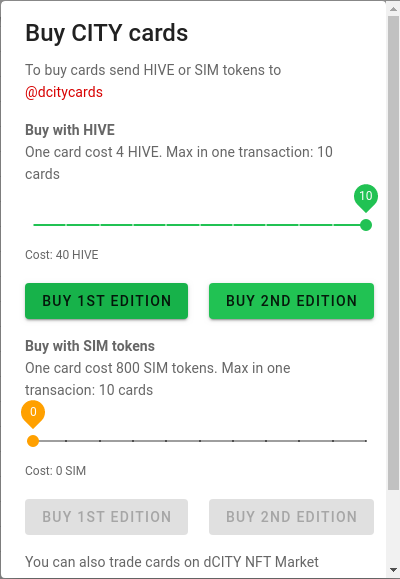 There is a special channel called #city-stream in the Dcity Discord to watch what new cards are opened: 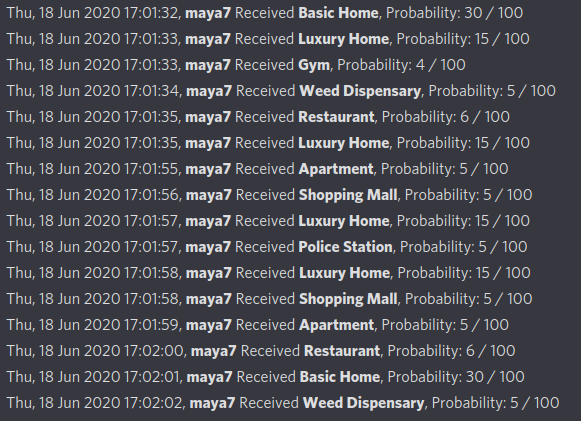 Each card has specific stats. These stats work together in some very creative ways.

The mains stats are:

INCOME - How much SIM per day the card produces
POPULATION - How much base population produced by the card
WORKERS - How many workers required to produce the SIM income
POPULARITY - Adds to popularity, which adds a bonus to base Population

The new stats in 2nd edition are:

Population is the Primary ranking stat. Each day the top 200 cities by population take their ranked share in 1.5% of the total HIVE reward pool. Half of all card sales go into the reward pool. The other half goes to @gerber's Lambo Fund. The reward pool recently topped 100 thousand HIVE!!!! This is the effect of the excitement people have for second edition cards.

Our sister city @ecoinstant is 'in the money': 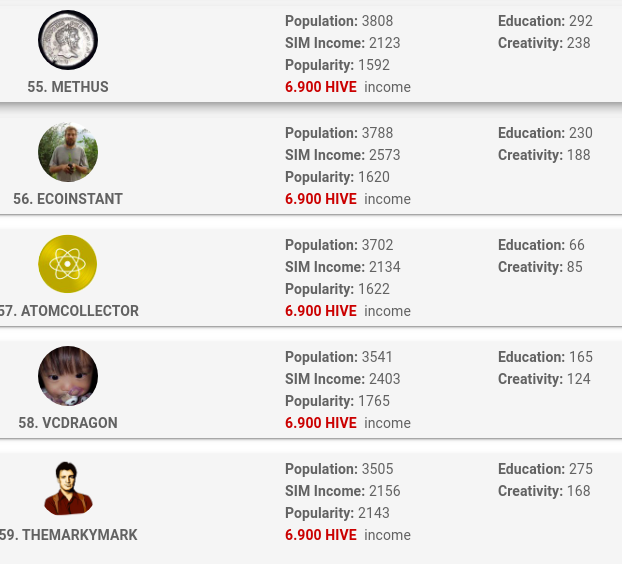 While this daily ranking looks quite flashy and wonderful, there is a more subtle economy going on beneath the surface of DCity. It is the SIM economy.

SIM is the in-game income. Each day, your city produces sim based on the income of the cards inside of your city (as long as they have workers to operate them. In the above example, @ecoinstant city theoretically receives 6.9 HIVE and 2573 SIM per day. Since 800 SIM and 4 HIVE will always buy a dcity card, the SIM price peg is 1000 sim for 5 HIVE. Thus @ecoinstant's total rewards per day can be totalled like this:

These calculations can make it fun and profitable to play a small city as well as a big one. Here we are on @ecoinstats: 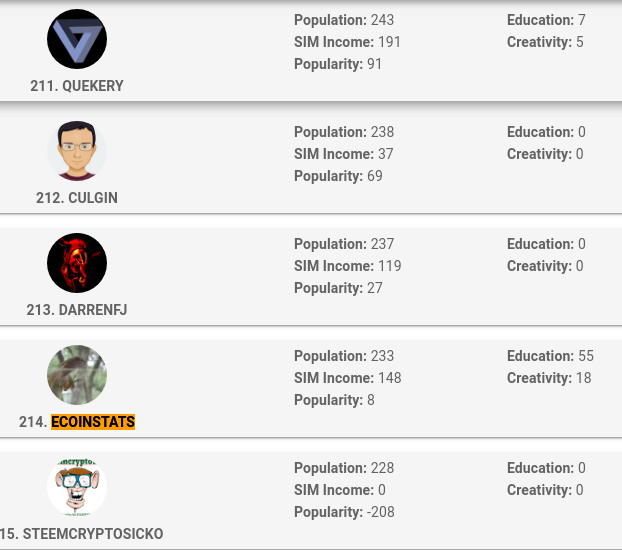 Even if we manage to get into the top 200, the earnings would only add 0.3 additional HIVE per day, less than half of what we are already earning.

Random crime can take away some of your SIM income on any given day!

We have found it so much fun exploring DCity, specifically because there is no 'right' way to build a city. Some people compete for ranking, some maximize SIM income, recently we have seen some cities that are maximizing their education so as to better mine the technology cards that have joined us for 2nd Edition. We are just happy to have a 1% chance to find a technology card each day.

Four completely different tech trees with 5 tiers each are now a part of the game. Unlocking any of the technologies for SIM within the trees allows a city with a Research Center to get a chance at making a breakthrough each day, and printing a new tech card. Unlocking the tech tree with SIM does not give you tech, just makes it open to be discovered. Multiple tech cards do not stack, but can be sold. Buying tech without unlocking it on the tech tree does give the benefits.

Unlocking new techs for discovery is rate limited to once every 36 hours, but for 900 sim a player may skip this cooldown.

Optimizing your City on the Margin

Because of the popularity boost on population creates a curve, each building will have different marginal effects on a city depending where they fall on the curve. This 'marginality' makes the game quite a lot of fun to micro-manage with a spreadsheet. But this is not required to have a good time.

Cards in DCity activate in order of ID. To test what your city would be like without a card, the current User Interface allows you to click on it and see the new stats. 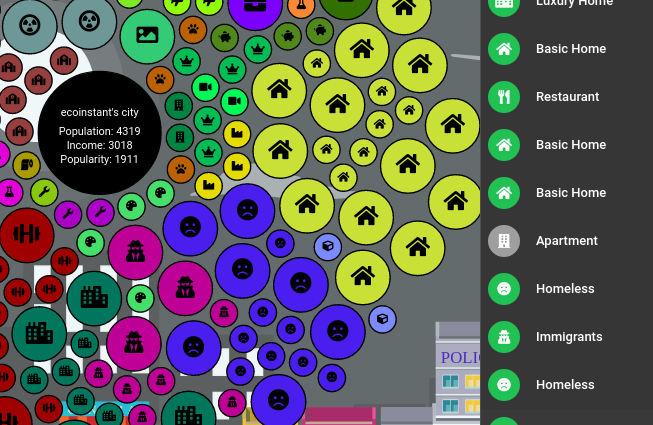 This way a player can see the real current effects on their city from each card. Take the Apartment for example: 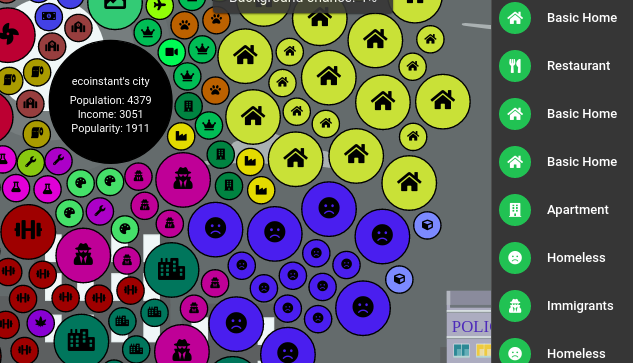 In this case, the Apartment which adds 20 Population and 5 Income is really responsible for 60 Population (through the Popularity Multiplier) and 33 SIM income (through its population activating other building cards).

So 60 Population and 33 SIM income is this Apartments true value, on the margin.

The most important 'marginal' piece of infomation is the 'full employment' figure. If the image is RED, as above, that means you must 'hire more workers'. One or more of the building cards is not activating because of not enough workers.

How do I 'hire more workers'?

The way you do this is actually by bringing in either more population (base population) or raising your cities popularity (increasing the positive multiplier).

Buying Basic Homes, Luxury Homes, Apartments, Workers, Artists or Scientists on the Market will increase your base population. Always make sure to click PRICE so it sorts it from lowest price (best) to highest price (worse). More updates to the market interface are promised for the future.

Once the number is in the yellow, these are 'unemployed' persons. Without a 'Social Aid Office' card, these unemployed persons, if there are enough of them, will drain the SIM income daily.

So you can see that 'Full-Employment' is a tight balance between Population and Workers (needed).

One incredibly fun piece of DCity is its integration into other communities. Now BEER, WEED, STEM and CCC all have a place in DCity, and more reasons that ever to make some posts in their communities to earn their tokens. EVENTS can be activated with each of the tokens in the MAP interface, each one maximum once per 4 days (96 hours). 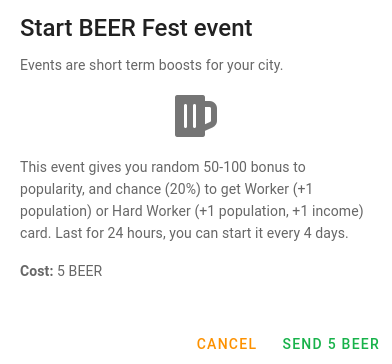 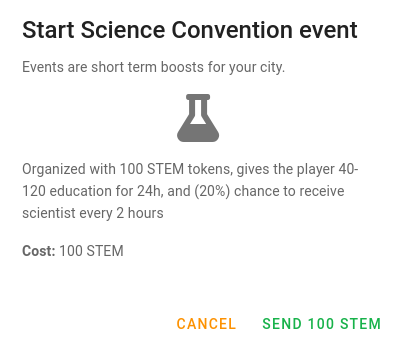 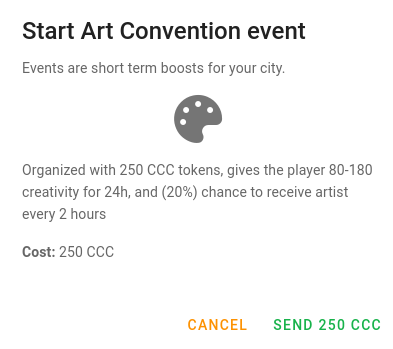 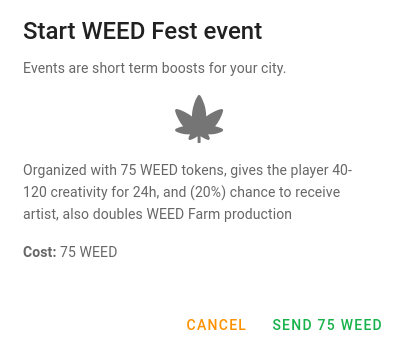 The BREWERY Card and the WEED FARM card will produce a daily income for the cities that hold them of BEER and WEED respectively. This amount varies per day, as the sub-token reward pools are replenished through events and paid out 1.5% to the card holders each day.

Other tokens look interested in joining the fun in future editions. @gerber has also confirmed that after a suitable time of 2-3 months, the Printing of 1st edition cards will be closed.

The higher the popularity, the larger percent chance to get immigrants and homeless cards appearing in ones city each day, and the probability of this is tracked on the interface. With a Job Center card, these cards will also have a probability to become workers, scientist or artists each day at the training hour. Apart from events, this is the only way these population cards are mined into existence.

They are relatively rare now, but will become a major part of the games population over time.

The game is in the final stages of testing governance, with the SIM-Vote Power elected President able to turn on and off certain taxes. Some of these will activate bonuses for certain cards, others, like the 'Basic Tax', will not. 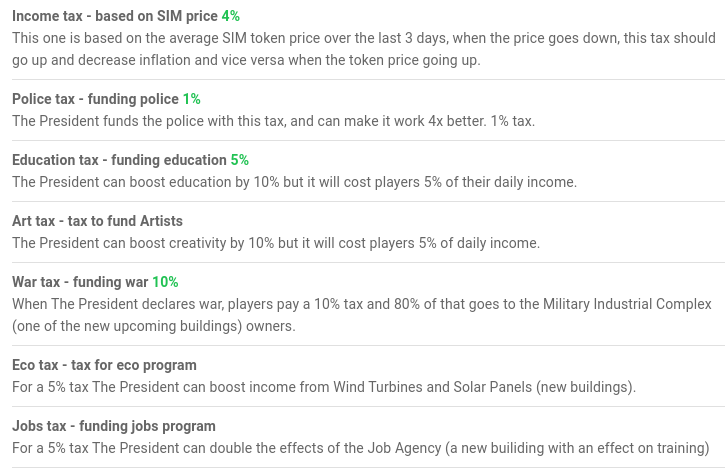 We hope you enjoy this basic review of the mechanisms behind DCity. Look out for our next post on the topic, which will review some of the intermediate strategies for enjoy DCity!

This is not advice. It is History - Always do your homework!

Thanks for putting in the effort to make this post. I enjoying reading it.

Some interesting nuggets I'd missed, in here. Appreciate it.

@ecoinstats The King thanks thee for thy informative tutorial. The Kingdom has sent blessings and prosperity to thee. Hi @ecoinstats, I think I found this guide useful as I want to begin building my Hub in dCity. However, I would appreciate if you make a new post similar to this with updated images in line with upgrades on the dapp. I'll gladly learn from you. Thanks.