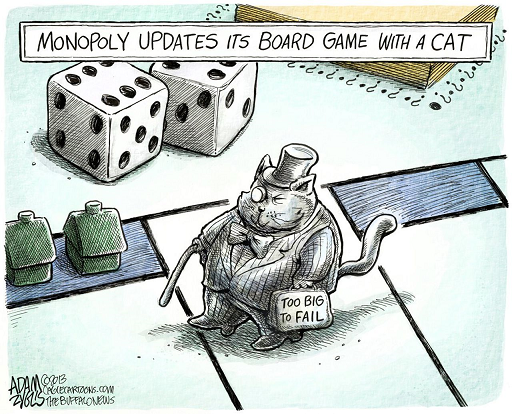 This one seemed to be more emotionally charged than all the rest combined so far. I predicted that dumps were overpriced in and we would rip up. That has yet to happen, but also volume is INSANE right now.

Still inside the descending triangle, but barely hanging on by a thread. Testing support for 3 days in a row at high volume is not a great position to be in... but arguably better than low volume. If volume drops off a cliff as is sometimes the case I'll expect a breakdown to a new support.

What support is below this level?

Lots of people throwing out crazy numbers like $15k and $12k and even $5k, which is obviously ridiculous. We are already at a rock-bottom level. I don't know if you've ever dug an actual hole with a shovel by hand and hit rocks after a few feet down, but damn it gets about 10x harder to dig once you get to that point. I think this market has reached that point at this time. Every $1000 we dip is a huge loss at this point. There's a ton of support all the way down and trying to say there's going to be very little volume between big dips is just silly.

We can see that during and after the meeting the market was just going bonker-balls-bananas. Normally we would expect to see this much volume on 30% pumps/dumps, but instead what we've seen so far is less than a 3% drop from 24 hours ago on the aggregate sites. Pretty wild, as I said before it's feeling very rock bottom right now. A grind lower will be slow and painful I'd imagine. There will be no ripping off the bandaid quickly in this scenario. 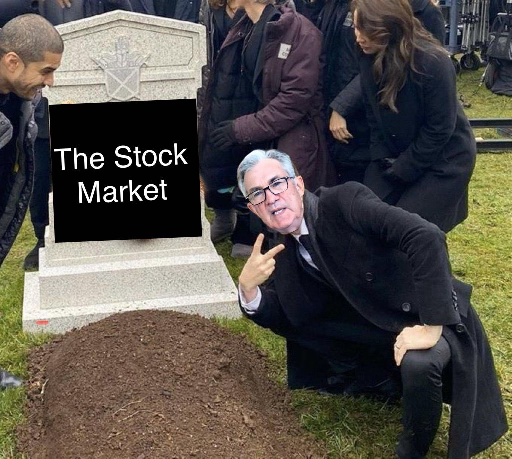 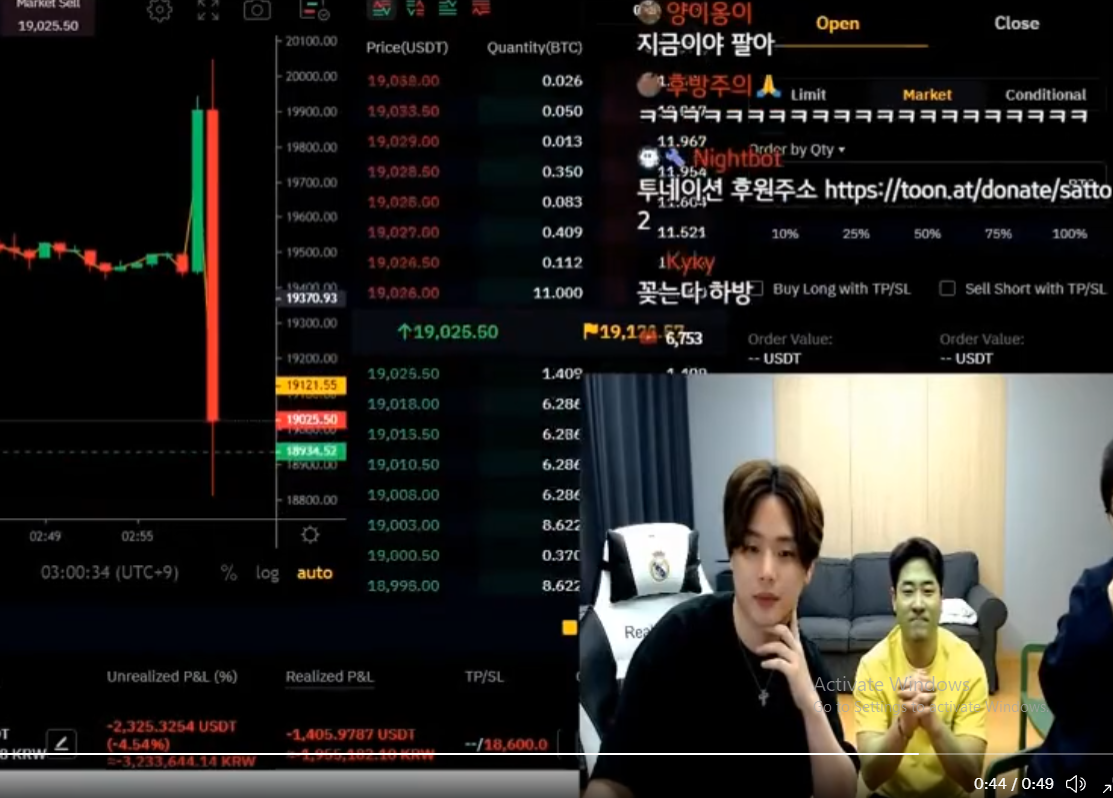 Who wants to see some Koreans getting wrecked trying to day trade this meeting?

HHHmmmmm, yeah... so I just keep refreshing the tab and volume just keeps going up and up. Pretty wild. Very emotional day of trading, to be sure. Tons of money transferred hands today. Just depends on who runs out of steam first... bears or bulls. Bears have been throwing some hard punches but ya never know. Either way the smoke will clear in a few days and we can see where we landed.

Most people would say we are extreme danger-zone levels with the support breaking like that, but again, I think there is a massive amount of liquidity all the way down at this point. Really have to ask ourselves how many people/institutions have been waiting to buy at these levels. One might say they had the opportunity to buy at these levels on June 17/18, but as we can all recall... sentiment was a little different back then considering we were just at $30k a week earlier.

Time is the great equalizer.

Today I'm prepared for the market to go down more.
In June I wouldn't have been able to say that.
The June crash was nuts and rather depressing.
What we see now is a suppression of the markets.

Eventually a bigger narrative than "inflation" is going to come into play. Right now the main focus is the inflation narrative, but as soon as some other domino in the economy tumbles over the FED will be forced to address it. Again, I think this market is suppressed and spring loaded to move up the second the FED loosens their chokehold. 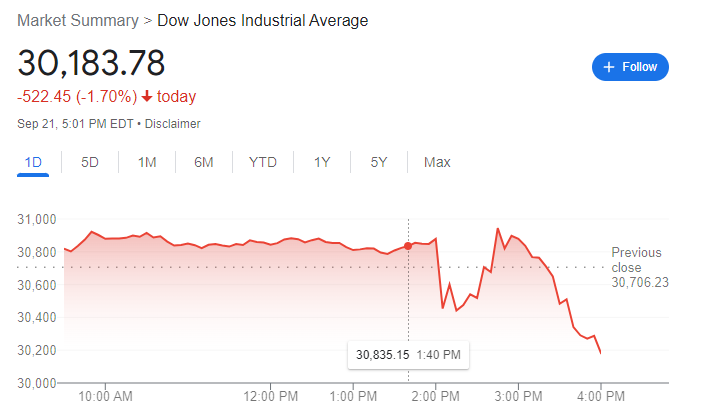 Actually you might argue that it needs to get stronger before it drops to zero. Normally Bitcoin would drop x2 or x3 more than the stock market. Today the drop mimicked stocks much more closely. As we grind lower into this bedrock level, the dips in Bitcoin will become less and less, until finally all the liquid institutional buffer is gone. 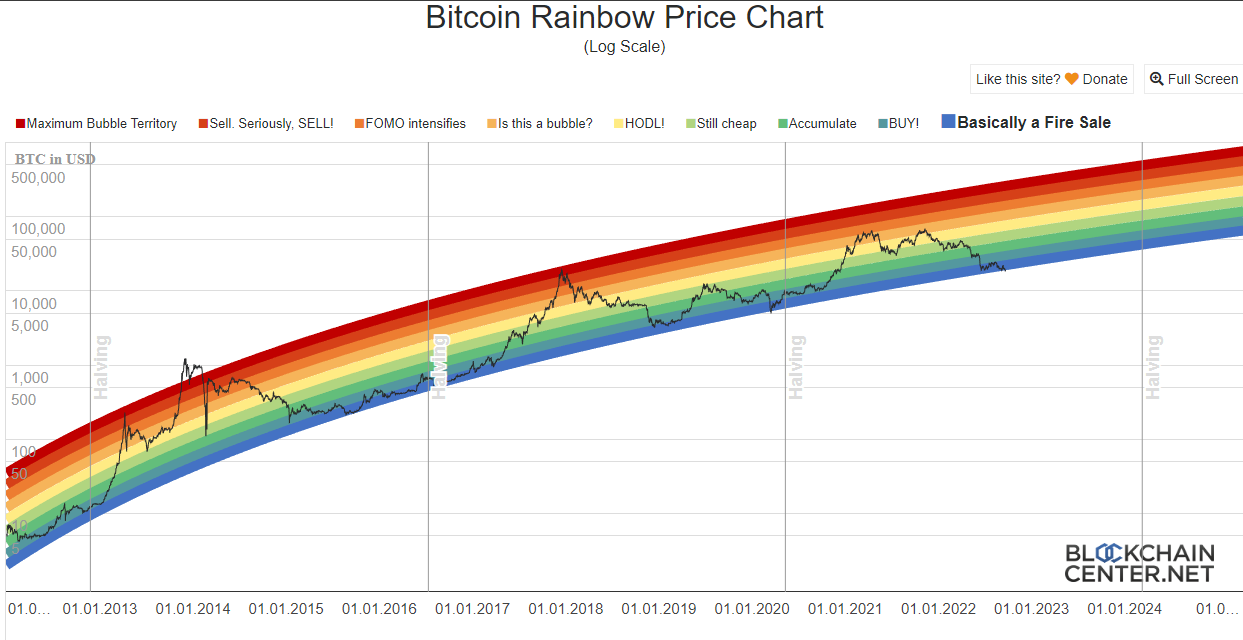 This chart is very similar to the doubling curve that I talk about a lot. Personally I think the chart is flawed because it forces the first 4 years of price action into the data. The first 4 years of Bitcoin don't count. They muddy the waters and don't really apply to a network that has a solid foothold within the economy. But that's just like, my opinion, man.

Regardless what we see is that the price has dipped below the lowest level for the first time since the COVID crash in March 2020. Talk about fire-sale. When the reversal comes it's going to hit the bears like a ton of bricks. 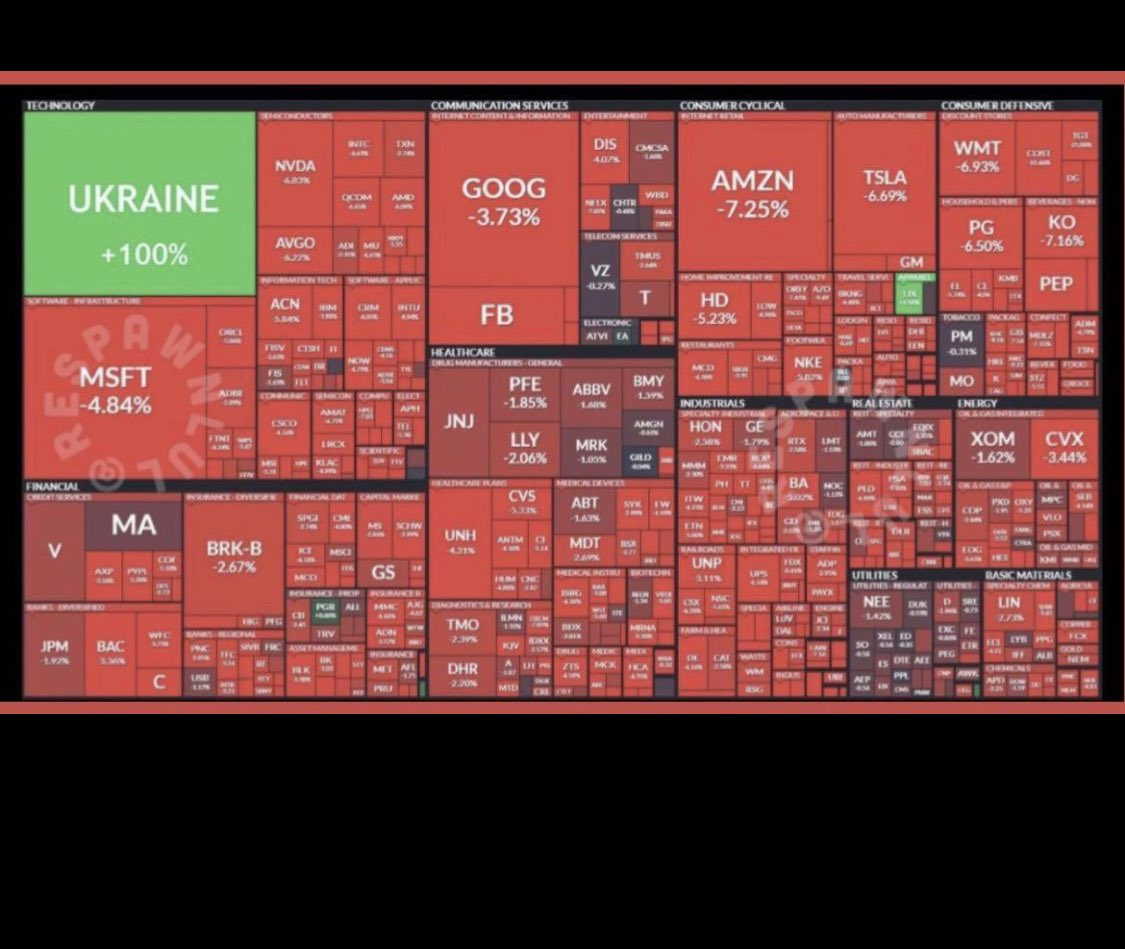 Can't even finish this post before the market dips back into the bad place. Boo! Not good not good. But like I said before, I'm not truly worried until volume drops off a cliff and we are still stuck at this lower level. Hopefully that won't be the case but no promises. You know how it is around here. 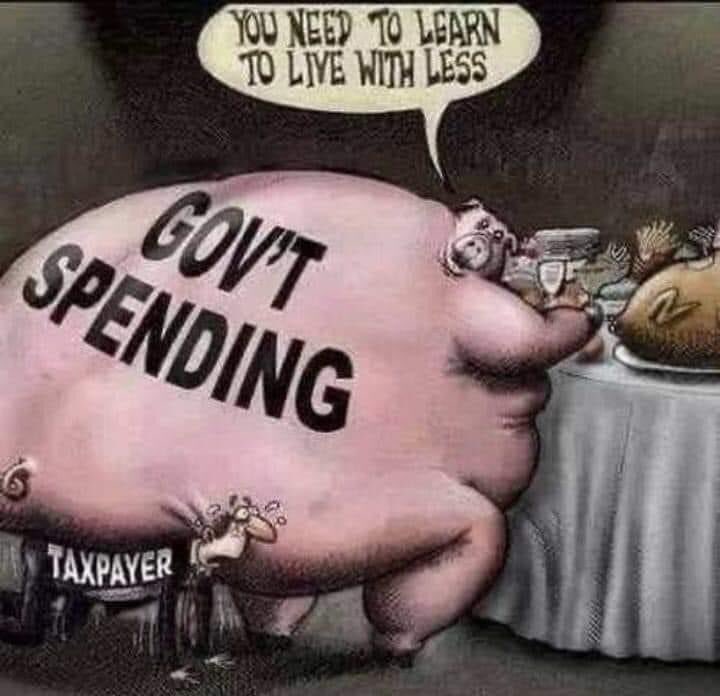 When it really comes down to it, everyone knows that the system we live in is completely unsustainable. People see stocks and Bitcoin go down at the same time, and they ask themselves how Bitcoin is any different from the legacy market.

Let me remind everyone that a number on a screen is not a good representation of what crypto stands for. Everyone loses in a bear market. Some lose more than others. The point is that over a long enough time period these short-term swings shouldn't matter. Sure, going from $10M net worth to $1M stings, but you still have plenty to live off of until the upswing puts you into the $100M range. And then the dip down to $10M hurts but then you remember that $10M was the peak of the previous run. That's how crypto works. The stock market? Not so much.

And that says nothing about what we are actually trying to do here. We are trying to reforge governance itself from the ground up. Bitcoin is the most basic possible form of governance, reduced down to simple value transfer. It's not complicated enough to build up, but it is a great backbone for the rest of the space. More importantly, it's simple enough to be unassailable and impossible to corrupt/kill. That's the value of Bitcoin: security.

Another sad day in the market! Unsurprising considering the state of the world, but obviously not what anyone was hoping for. We can still beg for a magic recovery after the smoke clears, but should be prepared for anything.

Most importantly we need to keep our eye on the prize and remind ourselves why we are here. I'm here because I believe we need to rebuild society from the ground up. To expect there wouldn't be stumbling blocks along the way is magical thinking.

I'm honestly surprised with how much everything has dipped, especially since the majority of investors expected this 0.75% rate hike, and I'm pretty sure the Fed hasn't finished yet. Until all their lagging indicators show that wage rises definitely aren't a thing anymore, they're not going to stop. They've also still got a massive balance sheet, so I'm not sure when those assets are going to get sold off.

it wasnt the hike that crushed the markets spirit... it was the future outlook that had everyone worried. i forgot to mention this.

I belive in magic!!! That libra new moon is around the corner. Might be a litte extra sparkling this spin around. Guessing we'll continue to see a balancing act between these bulls and bears? Feeling stressed? Just breathe!!!!! Go Hive!

"More importantly, it's simple enough to be unassailable and impossible to corrupt/kill. That's the value of Bitcoin: security."

The above statement is factually incorrect.

What do you think will happen to BTC if the price of electricity increases by 2500%? PoW makes BTC highly susceptible to high electricity prices, and prices in Germany briefly rose YoY ~2500%. They don't even have to admit they're killing BTC to kill BTC. They just have to sanction Russia. Price controls simply transform inflation into shortages, and exchange blackouts for power bills. They will not save BTC.

BTC is the Gorilla King of crypto today, but all cryptos I am aware of can be eliminated by censorship, because they all depend on someone else's network. Network operators can simply demand the keys and refuse to allow encrypted communications they don't have the keys for. Worse, they probably don't need to convince you to give up your keys. There are credible reports that commercially manufactured chips are backdoored at the factory. In the event the WEF intends to eliminate competition for CBDCs, such backdoors leave crypto stakeholders unable to resist forced swapping for CBDCs. That's if they're being nice and don't just delete cryptocurrencies out of hand.

Russia is now testing the digital ruble. Russia has already made BTC illegal. Russians almost certainly continue to transact with BTC, and Russia is probably incapable of enforcing it's laws in this regard, but the WEF isn't Russia, and can enforce Russia's laws for them. If you see a dichotomy between WEF sanctioning Russia and enforcing Russia's laws, perhaps you will see a similar dichotomy between Biden declaring the pandemic over, and NY firing >800 teachers that same day because they weren't jabbed.

Not only is BTC assailable and possible to kill, it's almost certain to face CBDCs, censorship, and electricity prices orders of magnitude higher than it can sustain, all of which are existential hazards. BTC will have to withstand all these hazards in the foreseeable future.

I hope you can rationally grasp the hazards BTC does actually face, so that your investments aren't dependent on luck. Luck is for gamblers. If you're betting on BTC, you're betting against the house. The house always wins.

Increasing volume in the BTC chart may be a good sign. I didn't notice before this post. 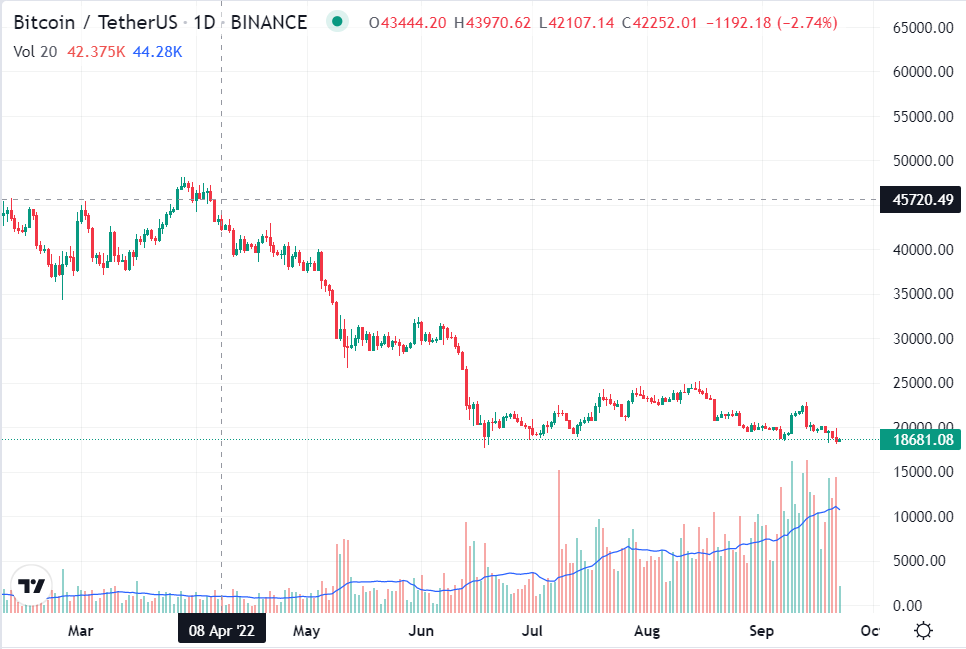 As a newbie who sometimes gets so disoriented by the information floating all around which makes it quite hard to do a proper analysis of the current state of the market, I appreciate your breakdown.

Lots of people throwing out crazy numbers like $15k and $12k

While looking at the BTC all time chart I'm not taking this out of the equation... I used to be on the other side for many months now.

I like that rainbow chart, they added the "basically a fire sale" level quite recently. I wonder how it will look like if BTC dives to $12k.

Let me remind everyone that a number on a screen is not a good representation of what crypto stands for.

Someone had to say it.