HardFork 25 Goes off without a hitch 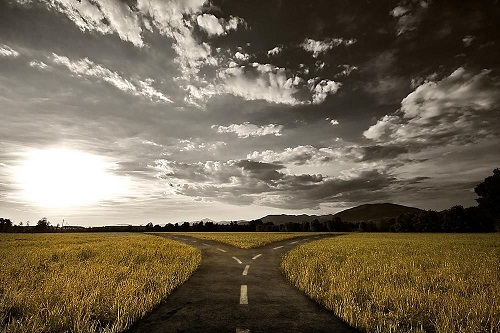 In this case we won't take the road less traveled.

Shoutout to all the Hive devs who made this happen.

Including my own @hextech witness team.

It's crazy to think that we used to have a full-on corporation who's job it was to roll these things out, and we seem to be doing a better job than they ever did. Kudos to @blocktrades and everyone else.

In my opinion this is the best hardfork Hive has ever seen in terms of functionality and keeping it simple. Many of the "economic incentives" imposed by our Steemit overlords have been rolled back, and I couldn't be happier about it.

Everyone's upvotes on comments has just been doubled.
My 1% upvote has gone from 2 cents to 4 cents.
Pretty wild.

There's no longer an extreme competitive element during the curation process that gets exploited by bots. We can now upvote any comment or any post within a large window (one day) and get an automatic 50% kickback just like with HiveEngine tokens.

Apparently voting on day 2 or day 3 results in a curation reduction of 50%, while voting on day 4-7 results in a huge penalty of 87.5%. This penalty is funneled into the pockets of those who vote first, but seeing as the vast majority of users will vote on day one it seems unlikely that these other tiers will have much impact in the grand scheme of things. For the most part curation is simply a 50% kickback to the upvoter now.

This simple solution solves a lot of the looming stability problems with HBD and makes it a lot more functional. Kudos to Peakd for hitting the ground running and already having the option right there on the frontend. 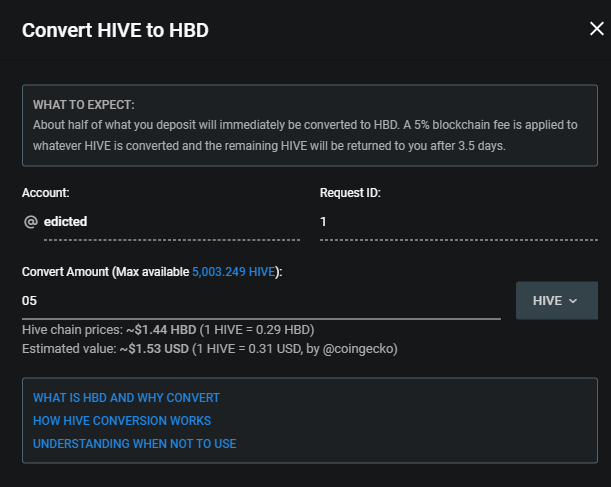 This is a huge win as it should greatly stabilize the network as a whole (hive included). In 2017/2018 we printed way too much HBD due to the broken peg and this sent the token price soaring downwards due to months and months of conversions that should have never happened in the first place.

Now that HBD will be pegged to the topside to $1.05, instead of spiking up to $13 and taking forever to return to the $1 peg, we will get back to the $1 peg immediately after the market peaks, reversing the conversion process much sooner than before. Theoretically this will make the next bear market a bit less devastating. Hopefully the days of 10 cent Hive are long gone. We deserve a higher floor than that with all the development/decentralization that's happened over the years.

Users now have a much higher incentive to lock HBD in the bank account to farm yields (currently 7%). This yield can be raised and lowered on demand by the witnesses and is totally separate from our other inflation mechanics like the reward pool. Used to be this inflation was allocated to all HBD, but now this yield is quarantined to the 3-day timelock in the savings accounts, which feels like an improvement.

This is a nice start but it's not very competitive when compared with current DEFI protocols. Personally I think this yield should be competitive rather than a flat rate set by the witnesses. This would require a separate reward pool and make the yield variable based on stake in the pool like other dapplications.

I've been pretty vocal about how yield farming is the future and inflation minted in this way creates a lot more value than it saps, but at the end of the day we can't make too many changes to the network all at once so I guess I'll table that conversation for later.

Pretty self explanatory, but I don't know much about the details. People seem excited about it, but I don't really plan on subscribing to anything anytime soon. Still, it's a nice development for potential subscription models to allocate Hive. We'll see who adopts this function.

This is arguably the biggest upgrade to the network to a pretty wide margin. I'm told it should be implemented before the end of the year, which will be perfectly timed if we end up getting a big wave of adoption (assuming a mega-bubble on a 4-year cycle).

The reason why this is such a big deal is that every user needs RCs to use Hive. As it stands now users without any Hive must be delegated actual tokens in order to get the RCs. Not only is this unsustainable, but it is also exploitable when token price goes up and the USD value of small delegations adds up to real money worth exploiting (happened in 2017/2018).

RCs pools separate the bandwidth resource from the governance token, something that very very (if any?) networks have accomplished. It's a pretty big deal that's usually largely understated from a backend functionality point-of-view (much like account recovery).

Again, in my opinion this was the best hardfork yet by a wide margin, and it was implemented more smoothly than perhaps any hardfork I've been around for.

Kudos to all the developers who made it happen (quite a few).
Hive is going places.

Am quite surprised it went without a hitch, even though it's a pleasant one. Just goes to show how much we've matured as an ecosystem

I love Hive..And I really mean that.

I think I’ve now experienced 8 or 9 hard forks and this one is the first that, as an end-user, seems to have caused not even a hiccup. When the time for the fork came and went, I actually thought that it had probably been delayed since I had come to expect big glitches.

The only issue I've seen is that it hangs and refuses to move past the "access key" screen when I try to login from the main leofinance.io site. I have to visit my profile page and then it shows me logged in. So something is wrong with Hivesigner on the main page (at least for me).

That EIP hardfork ages ago went well, for a few hours, then shit hit the fan, while folks were writing the That Went Smoothly! posts.

Things are looking good so far. Took a vacation from my vacation just to see how things are going.

Nice to see you folks haven't burned the place down.

Took a vacation from my vacation just to see how things are going.

Looks like seeing how things are going is very much time consuming. 😂

I ran my voting power down hard yesterday in preparation for a day of downtime. I think that this is a better outcome! Seamless.

I guess besides the errors a few days before the hardfork, there were no issues.

Also I heard someone randomly say you could vote on posts past the payout. I was pretty sure this hardfork did not add this but I was not sure. Do you know?

In my opinion this is the best hardfork Hive has ever seen in terms of functionality and keeping it simple.

THIS. What I'm most excited about is seeing whether or not HBD is actually tamed from getting pumped over $1. Way too early to tell right now. There was one last pump of HBD to around $1.60 yesterday which was really WEIRD.

Based on the past, I was expecting problems, so I am very happy at how smoothly this went. These are all great changes. The future of Hive is looking good!

now it takes 3.5 days to convert Hive to HBD with a 5% penalty

You receive HBD instant. Converting is intern ( not sure how it works, smooth explained it to me). It takes 3 days but you can spend the tokens direct after converting.

And RC pools will be huge!!!

It's probably time to look at inflation overall, now.
HBD inflation is not counted in the 'advertised' inflation rate.
This is what I propose to fix that:

The newb pool is, of course, the reward pool.
Staking hive/hbd in the savings account would get 12% of the overall inflation rather than the little bit it gets now.
I'd drop the unlock on hp to 10 weeks and up its interest to 20%
I'd up witness pay by 50% and witnesses in consensus to 29+2.

50% for the folks sustaining and 50% for attracting new users seems about right, to me.

It's crazy to think that we used to have a full-on corporation who's job it was to roll these things out, and we seem to be doing a better job than they ever did.

This is strong proof of the superiority of decentralised open source systems in the online space.

True decentralisation is very hard to achieve but once achieved, very powerful.

The features of this hard fork 25 is so so cool.
Congratulations to hive blockchain team who contributed to this wonderful upgrade and to all block traders. Nice knowing the lunching was done successfully without any hinge.

I totally agree about the whole Steemit thing. Just shows you what can happen when the community is in charge of things. Such an amazing accomplishment for everyone involved yesterday!

10% sounds better than 7% and I see a few witnesses are signaling for that already. Would 10% be competitive?

It's a nice unit-bias number to be sure.
Probably enough to incentivize a lot more holders of HBD.

how long before exchanges open up deposits you think?

Pretty good recap. Glad we could get all the tools up and running for you right away.