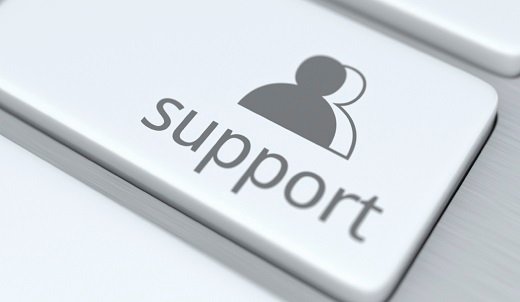 I don't often have technical issues with LeoFinance and associated subsidiaries, but when I do I use the tech-support channel in Discord. 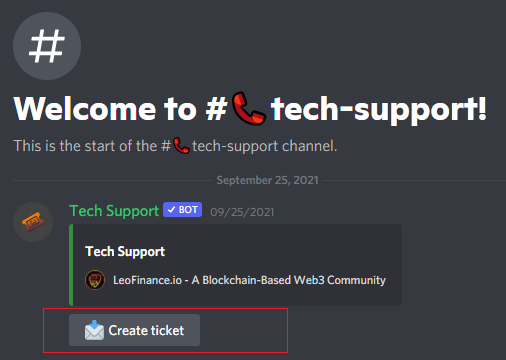 Getting a problem resolved has never been easier.

From here a bot will create a ticket for you, and you can click on the link provided or check the alerts under "Open Tickets" on the left-hand-side scroll bar. 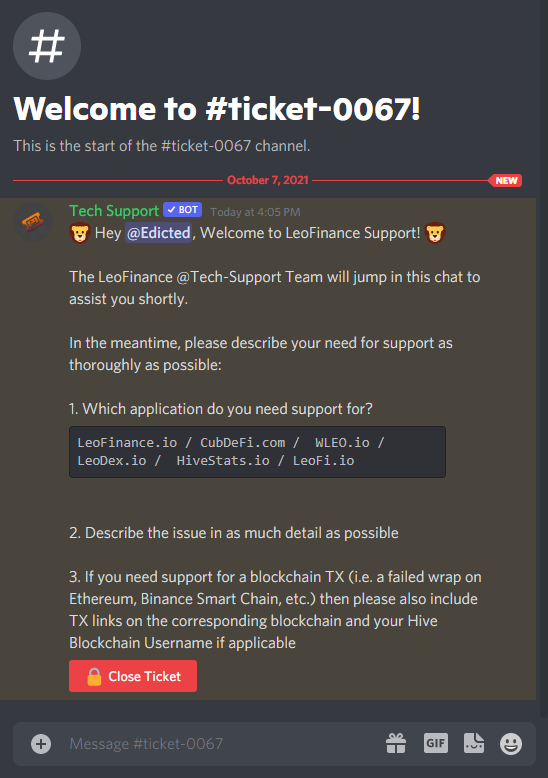 From here a chat window will open which allows you to describe the problem you are having.

Should your problem be resolved before receiving help from a LEO representative be sure to close the ticket to save their time for the next person.

It may not seem like a big deal at first glance, but streamlined changes like this really add up over time and allow projects to scale up and give users a much more professional experience. Let's not forget that crypto is still in the Wild West phase.

We are witnessing the infancy of what is likely humanity's most important accomplishment to date. The ability to scale the economy and give communities back the means of production and power over currency can not be overestimated.

However, it would be foolish to think that there wouldn't be growing pains along the way. 2022 will be absolutely filled to the brim with scams and cash grabs. How are all these newbies going to be able to tell the difference between what's legit and what isn't when projects like Uniswap and just give away $2000 for free in an airdrop?

If you would have told someone a couple years ago they could get $2000 for free they would have called that out as a scam immediately, and they would have been right. Crypto is blurring all the lines. The rules of capitalism are being bent and broken.

Even Shiba Inu, a year-old meme-stock clone of DOGE, finds itself at #15 on the worldwide market cap rankings today. That's insane! Do you know how much LEO would be worth with a $13 BILLION dollar market cap? $1444 PER COIN: LOL. This is exactly the kind of absurdity we can expect to continue seeing into the future.

Hive and LEO have one thing that these meme-coins don't: and that's staying power, a strong community, and constant development. Think these Shiba Inu bandwagon jumpers have any loyalty to their community? Nah, just a get rich quick scheme. Personally I look forward to seeing who's left over after the inevitable 99% dump. That's when only true believers remain.

Don't get me wrong, I'm not jealous or annoyed that seemingly worthless tokens are rallying to absurd levels. I have plenty of money. I'm good. If anything, I'm worried about what happens to the millions upon millions of new crypto users that lose everything during the next bear market and swear off crypto for good. We need to retain as many users as we can, and I think Hive and LEO have good positioning this time around to accomplish just that.

The LEO development team keeps up the good work and dumb money still runs rampant through the cryptosphere. Only a matter of time before we catch a bid to the upside. Except unlike some of these other projects we've actually earned it and can maintain the status quo.

Remember in 2018 when everyone just decided dumb money would never return to crypto? Yeah, where are those people now? They're all covering their eyes singing "La-la-la-la-la-la-la I'm not listening!"

Crypto will always be filled to the brim with dumb money. Why? Because crypto is simultaneously the most complex and valuable asset in human history. That is the ultimate breeding ground for dumb money. It's the goal of the LEO community to add a little bit more smarts to this equation. There's a sucker born every minute. Let's teach them a lesson or two.