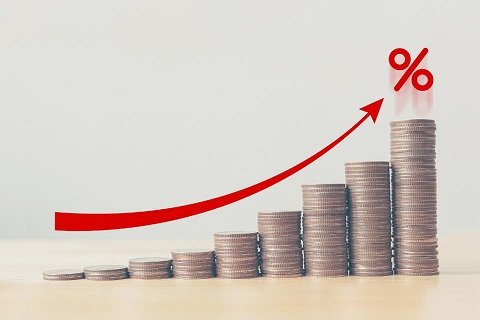 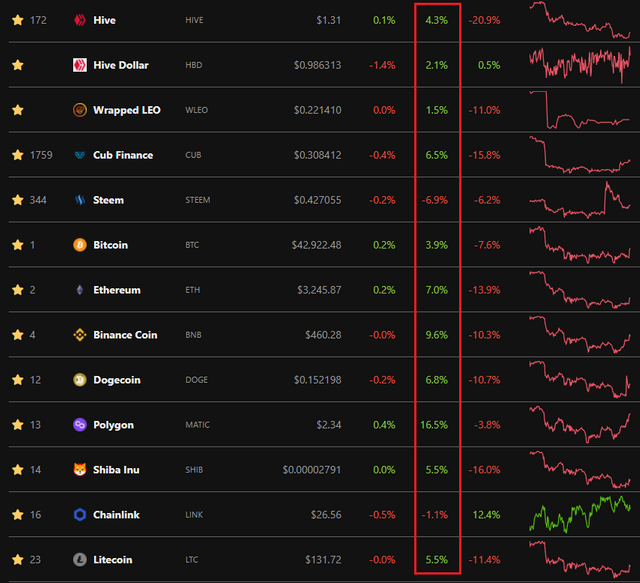 The market looking pretty sexy today.
Everything is up (except Steem; haha).
Like I said, that dip below $40k + instant buyback was significant.
We are moving up on terrific volume.
And the bullish moon cycle hasn't even started yet.

I have the urge to buy back in.

I want my BNB back, which probably means tomorrow will dip a tiny bit, so I'm just gonna sit tight and wait till the weekend to make a move. Diamond hands and all that. Plus, I've never made money when I bought on impulse.

Except for that one time in 2021 when I bought 75% of my entire Hive stack all at once (kek). But again, in the short term, I lost money buying 100k+ Hive back then at 15 cents. There were so many opportunity-cost losses sustained. Uniswap was outperforming, and so was Ethereum. I dumped everything for Hive/LEO/CUB and never looked back. Only now in retrospect does it feel like a super smart decision. Back then I was SWEATING IT real bad. Hindsight 20/20. 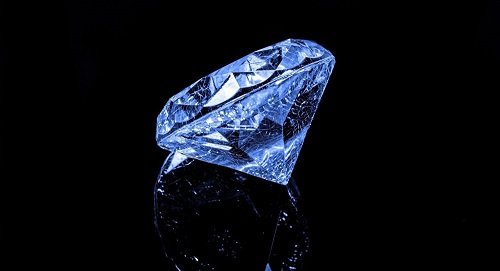 This is a topic I bring up a lot, especially when I speculatively shitpost on where the price is going. This is the only metric I've found to be consistently accurate over the years. The rules are simple: Bitcoin has been doubling in value every year, with a baseline value of $100 in 2013 (the stable price of BTC after the first halving event).

An origin story you say!

So I went and found all of the posts that I mention 'Moore's Law' or 'doubling curve'. They are listed below.

The ability to create currency that acts as a store of value and a medium of exchange is revolutionary for this exact reason. We no longer have to buy other forms of property to escape corrupted inflation distribution. Blockchain will allow the gains made by all technological advance (not just crypto) to be captured by the average person. Moore's law will start applying to money itself, doubling in value every year.

This is the earliest post I can find about my whole doubling curve theory. Back then I only had to calculate it up to 2019. So essentially I've been talking about this for three entire years at least, and it has yet to fail to deliver.

I forgot that I used to judge up-and-coming blockchains on these metrics. Funny because back in 2018/2019 Steem had really good speed, community, and application, but inflation and decentralization were lacking in my opinion. The ninjamine and Steemit Inc. were pretty not great.

Now that we forked to Hive we basically have all five, which is pretty wild when you think about it. I've learned a lot about the "inflation" category, and now believe that Hive's inflation schedule is superior to even Bitcoin. Our governance is superior as well, with a distribution that gets more decentralized by the day.

I continue to push the theory of Moore's Law onto the cryptosphere. Bitcoin will continue to double each year. 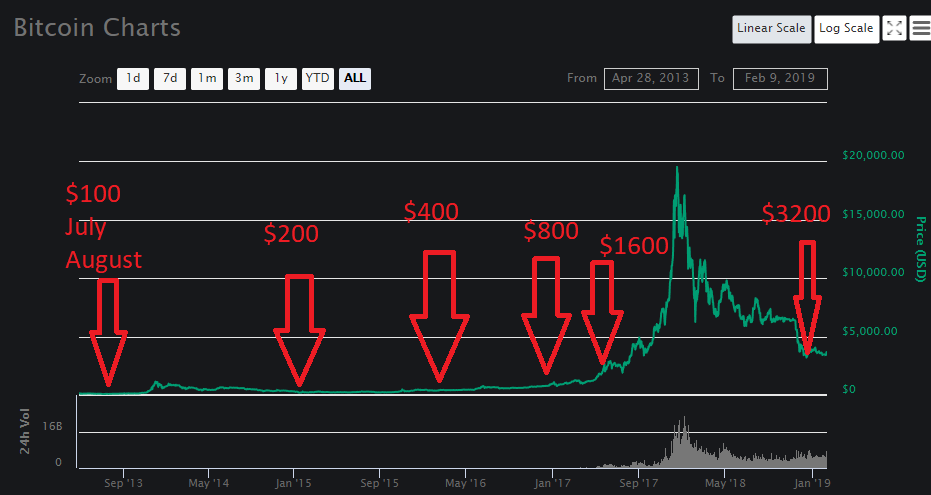 Wow: blast from the past.

Here I show how the price of Bitcoin hit the doubling curve every single year from 2013 all the way to 2018. Pretty wild. I calculated the bottom pretty well. Unfortunately I thought alts would perform just as well as Bitcoin, so I wasn't stacking a whole lot of Bitcoin back then. I thought Bitcoin was boring and already outdated back then. Now I realize that it will likely always have the highest store of security. Invest in security when the market is down. I learned my lesson the hard way.

Invest In Crypto; Double Up Every Year.

I've been telling people this and they think I am fucking out of my mind. They are going to make the safe play. The play where they work a job that extracts as much value from them as possible while giving back the least possible; a cog in the mechanized corporate ladder.

Seems to have aged well.
I'll take it. 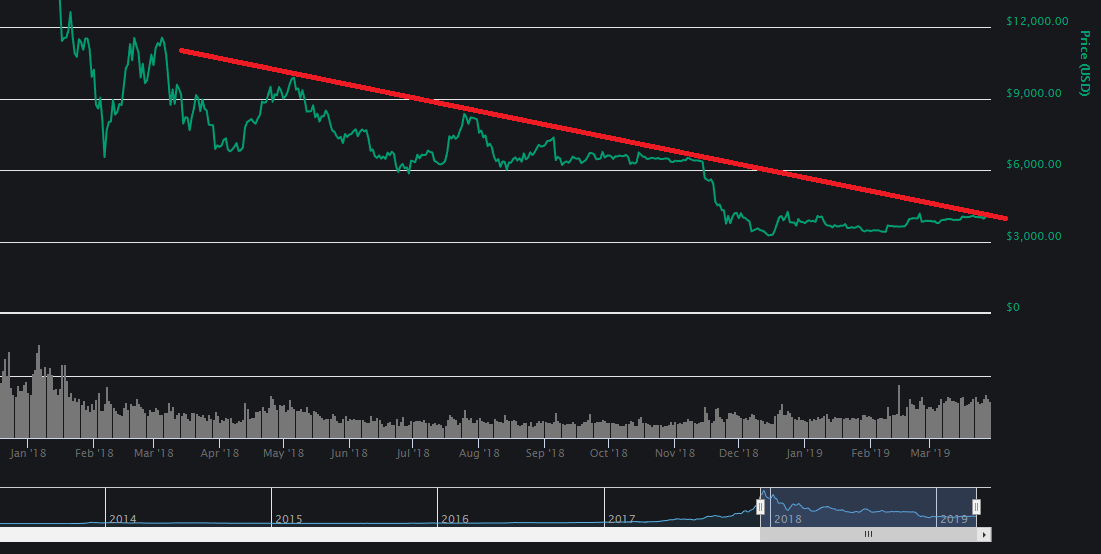 In this post I predicted pretty much exactly when the 2018/2019 bear market was going to be over and Bitcoin would start spiking up again. Glorious what one can do with a well placed resistance line. A few days later I declared sweet victory. Thank you, doubling curve!

Looking at the charts, this is the end of the retracement after the summer 2019 bull run. Took 5 or 6 months for the price to deflate to the doubling curve after that Bakkt pump/dump institutional FOMO disaster. We've obviously come a long way since then with the institutional investors. Even Jamie Dimon has flipped Bitcoin bull these days. Crazy!

Look at how perfectly Coinbase Pro liquidity double bottoms EXACTLY to the doubling curve after the 2019 bull run. It was pretty insane to see my doubling curve theory proved to be so precisely accurate. Always buy the double curve, fam. Can't go wrong... except for that one time. 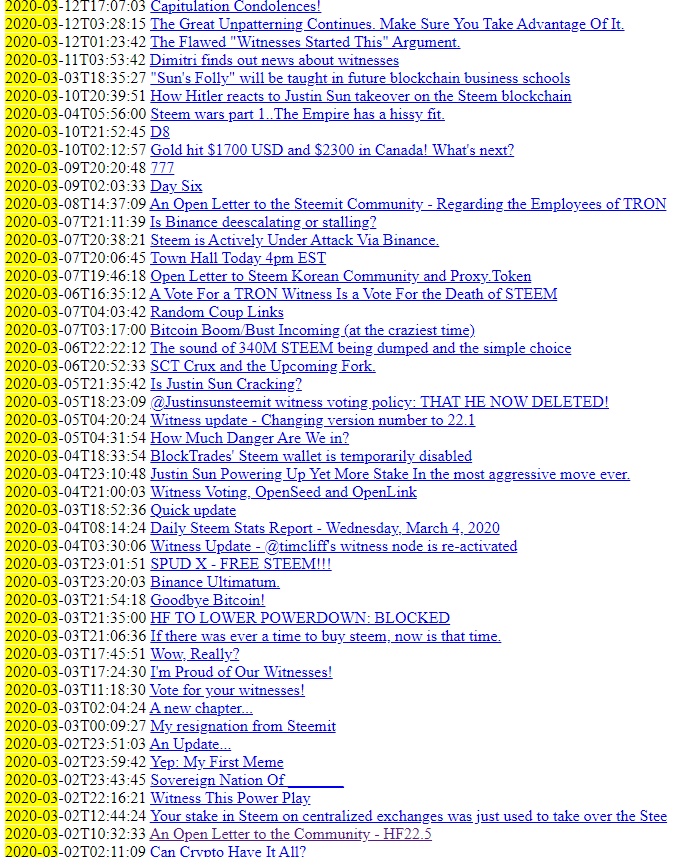 I appear to have written and reblogged a total of 80 posts that month. Quite the ratio for someone who usually posts once a day.

The TRON Foundation is committed to add value and grow the Steem ecosystem and intends to use part of the Steemit stake for such executions. With that in mind, on February 13th, both TRON and Steemit planned to meet to discuss the future road map, with respect of the Steem community. Unfortunately, the Witnesses’ decision created a need to reclaim the stake and vote in new witnesses to usher in new policies for a healthier ecosystem and community.

Unreal that Sun was able to get three different exchanges to power up funds and attack their constituents' own investment under the guise of "hackers".

Truly mind-blowing stuff.
How is he not in jail right now?
LoL @ rich people.
Have fun at WTO regulation camp, Justin.

And last but certainly not least, I would like to thank you, this badass community for all the support and having my back even when things looked their bleakest. I would even like to thank you, @Justinsunsteemit, your blind rampage of our home awoken something deep in the hearts of everyone here. You've awakened the Hive.

I regret to inform you all this will be my last post on the Steem blockchain.

STEEM has died today. My fight for STEEM is over. Long Live Hive.

But why do I bring up March 2020 and the hostiletakeover in a doubling curve post?

Whelp, as you may or may not recall, that's also exactly when COVID happened. What an insane month! Bitcoin crashed from the doubling curve at $8000 on March 11, 2020 to under $4000 on March 12th during the most epic bloodbath ever.

Now, many tell me that the doubling curve isn't accurate because this happened. Really? This is the perfect exception-proves-the-rule moment. Not only did we flash crash like this, but it only took 5 weeks to fully recover and trade exactly back on the curve. We traded on the curve from April 2020 all the way to November 2020. We've been in a super cycle bull run ever since, never returning back to the curve (which is currently at something like $27k BTC).

Apologies to everyone that took me at my word and bought Bitcoin at the doubling line.

Yeah, but then it not only perfectly recovered to the doubling curve, but traded almost exactly on it for the entire year of 2020.

It was truly insane honestly. 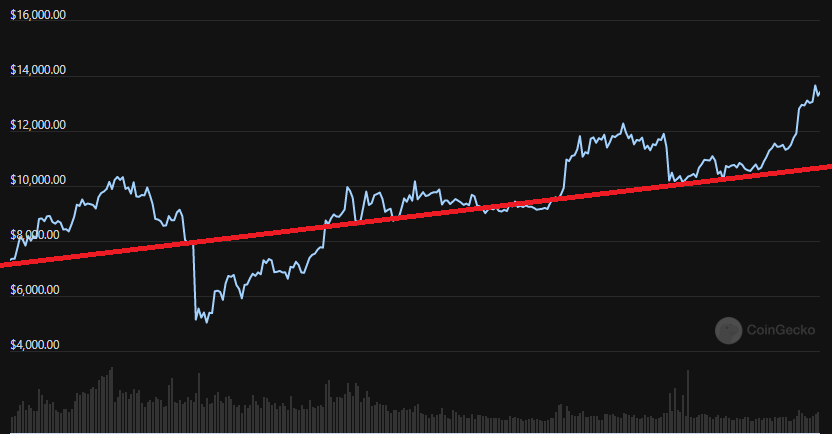 The red line is the doubling curve... and people had the audacity to tell me it wasn't correct because of the 5 week March once-in-a-lifetime 2020 COVID dip? That's like... so ridiculous. Look at how perfect that is! lol. The exception proves the rule. Still remains an incredibly accurate guideline for average floor price. As long as the economy isn't in full on meltdown mode, it's great.

You can be damn sure that I'll throw in a crazy x100 leverage bet if we flash crash 50% under the curve ever again. This might take a while, as current conditions would require that BTC crash to $14k or less. IE, not gonna happen.

Another big win for the doubling curve.

Again, even after the COVID crash it all worked out.
Even when the market bubbled a tiny bit we got slapped back down to it.

Don't forget, the current doubling curve floor value of Bitcoin today isn't even $30k yet, but it will be soon (end of Feb). We've been in a super cycle since November 2020, but no one recognizes this fact. Rather, every time the price goes up everyone just mentally locks in those gains as their God given right and cries when the price goes back down. Stop expecting the price should more than double every year on average. It's greedy and foolish.

That being said we still seem to be firmly within this super cycle. With a pattern of 18 months between bull markets spanning all the way back to 2016, our next run may very well be in six months. There is a decent chance that we are at the local bottom right now as this market starts moving back up. After all, mega bull runs require six months to actually happen. Should this we the situation we find ourselves in we way have just seen the bottom

Of course the next bull run could just be a normal one (around x3 doubling curve). This would put us around $115k in June. Considering all those laser eyes Bitcoiners there are out there this would make sense for a peak before a lot of bulls flipped bearish and took gains. Time will tell, as a crash to the doubling curve is also on the table. However, we've never been above it this long without a mega-bubble occurring. We find ourselves in uncharted waters, once again. Exciting times.