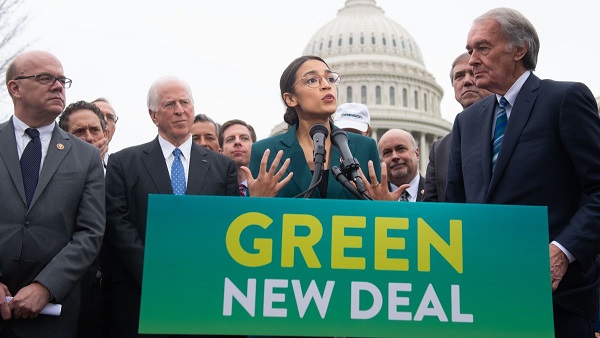 Trump isn't even out of office yet and the Kamala administration is already pissing on an empty grave.

The Green New Deal (GND) is a proposed package of United States legislation that aims to address climate change and economic inequality. The name refers back to the New Deal, a set of social and economic reforms and public works projects undertaken by President Franklin D. Roosevelt in response to the Great Depression. The Green New Deal combines Roosevelt's economic approach with modern ideas such as renewable energy and resource efficiency.

This idea has been around for over a year, but with republicans dominating government it was thought to be dead on arrival. Now it is being revived in the wake of a Kamala Harris victory. I'm not sure how they expect to get it passed with the senate in control of the GOP... oh wait, yes I do. They'll just bribe enough congressmen and add money funneling loopholes to the bill after they print that TWO TRILLION DOLLARS.

As written, it is more a list of ideas and ideals than an actual proposal, although the new climate change regulations it suggests could run to $1 trillion.

At the heart of this proposed 'solution' is pretty much everything everyone wants. Free high-quality health care, a new power grid, high paying jobs for everyone, no more reliance on fossil fuels, many types of renewable energy, less pollution, labor laws that protect the little guys, higher education, and public ownership of these changes.

It's a god-damned left-wing wet-dream.

If something sounds too good to be true... Seriously though why are they trying to do it all at once with a single bill? To make it as confusing a clusterfuck as possible so that they can print out trillions and funnel the money wherever? Hm, yeah... probably.

But I love healthy nature!

This is lumping a lot of things in together.

The quibble here between progressives and conservatives will be whether the US government should be providing access to health care.

Really? Not the thousand other things? lol

This is just the beginning. These fucks aren't even in office yet and they are talking about canceling Christmas and printing out trillions of dollars.

Automation is coming. Universal basic income is coming. Social credit scores are coming. The police state is here and stands to get x10 stronger. Poor people ARE FUCKKKKKKKED. It's good to be a white straight man. To everyone else: get wrecked; we win again.

The crazy thing about all of this is that everyone knows automation is coming, but no one seems to realize it is coming for their job. As a computer scientist, my job will be one of the last ones to be automated.

It's hilarious because all these guys at the top think oh yeah they're at the top no one can take their job. Yet here we are in crypto land where the ENTIRE POINT is to automate governance and take the powers of leadership away from corrupt centralized authority. You had your chance. It's time for algorithms to give it a go.

Bitcoin is just going to keep going up and up and up. The establishment keeps posturing that they are going to print fiat to infinity. Now that's one statement from them I can believe. Every confirmation that the world gets that validates the Kamala administration is coming into power is going to push more and more institutions into Bitcoin.

Seriously though, Bitcoin is theirs now, they are going to fully buy it out in 2021. Load up and hold. Make them pay for it big time. That is all these vipers understand: money.

December 8th and December 14th are big dates. First the states are required to have a 100% official count by the 8th, then electors vote on the 14th.

— Dec. 8 is the deadline for resolving election disputes

— Dec. 23: The certificates must be delivered.
This gives 9 days for states to replace/fine faithless electors.

— Jan 6: the House and Senate hold a joint session
Kamala will be declared the official winner.

As we inch closer and closer to this transition of power, we can be damn sure those with a lot of money at stake are going to protect their interests. And what does the elite do when prompted with the infinite brrrrrr-machine? They exit fiat.

Tons of money is going to flow into Bitcoin over the next year. Obscene amounts just like everyone has been predicting for 3 years now but didn't know exactly how. Now we see the narrative as clear as day.

But what about increased capital gains tax?

They won't want to buy Bitcoin because of the capital gains tax... right? Wrong... since when do big institutions even pay taxes? They all find ways to legally evade them. With Bitcoin the toolkit for that evasion opens up to an entirely new level.

The thing about capital gains tax is that it is not incurred until the asset is sold or transferred. So what about all the companies like Paypal who act as custodian for funds? They literally never have to sell or transfer any of their Bitcoin. And if they do they'll find a way to evade taxes, legally or otherwise. And if they get caught doing something illegal the fee is less than the gain for breaking the law. That's how it works at the top.

Corporations are putting Bitcoin on their reserve balance sheets as a hedge. They literally never have to sell that Bitcoin. If anything, they will simply use the Bitcoin as collateral if they want to "buy" something with it. Moves like this avoid the tax man altogether.

Take Paypal for example. They are going to use their collateral to "buy" USD. Once users buy Bitcoin with USD that USD becomes Paypal's and they've essentially sold their Bitcoin without actually selling it. The logistics are truly insane and hard to even understand at a macro level.

Just like a fractional reserve bank, Paypal is going to have a very good idea of how much of that USD they can spend, knowing that X percentage of their users are never going to ask for it back. Even though they'll be legally required to hold 1:1 Bitcoin reserves, the USD side gets completely ignored. Will they actually use it to buy the Bitcoin even though they already have the Bitcoin? Or will they use it for something else? Their choice.

So we see a situation where all corporations are going to start gambling on the market just like retail investors have been doing for ten years. Guess who's better at gambling than retail investors? Institutions. Prepare to get wrecked.

Government is going to keep bumbling along while technology continues to explode outwardly out of control. This New Green Deal nonsense is just the beginning.

Crypto is already primed to replace traditional government, and it is moving at an exponential pace. The New Green Deal sounds good on paper to left-wingers like me, but it's a total trap. Guaranteed.

All we can do is keep building these systems that actually matter while the rest of the world laughs at us, just like they did when Bitcoin was invented. We'll see who has the last laugh.