No One Can Save You From Yourself

Taskmaster4450 had a very good post the other day, pointing out a few very important things regarding financial freedom.

With cryptocurrency, the opportunity is there for everyone. Here we see an industry that is ever expanding, providing people with even more choices. Many of them will provide a terrific windfall. source

We keep saying for 5 years, since this chain exists, that cryptocurrency is going to change people's life and will have a major impact especially in underdeveloped countries and where the economy is struggling or already dead. This is true, we have a huge opportunity here, anyone with the simplest device and an internet connection can earn.

However, to get to financial freedom or from zero to hero, a laptop and an internet connection is not enough.

In reality, wealth is a mental game. It is one where what takes place between our ears is a representation of what will happen to us. With the lottery winners, even though they suddenly had money, they still have the poverty mindset. source

We see this mindset on Hive and LeoFinance every day. Make no mistake, I'm not blaming or accusing anyone. Everyone has the right to do what they want with their life, time and/or money and as I said, no one can save you from yourself. But when you have a golden opportunity like what we have here, it's a shame to waste it.

We keep talking about passive income for years but it seems like a lot of people don't understand what passive income really is, just like how many people think what you can earn here is free money.

Passive income is any money earned in a manner that does not require too much effort. There are several passive income generating ideas that require a lot of work, to begin with, like developing a blog or leasing property, but eventually, they earn money even when the owner is asleep. source

Last night @lbi-token had an amazing post explaining how LBI works. It is as simple as it can be so anyone can understand it. 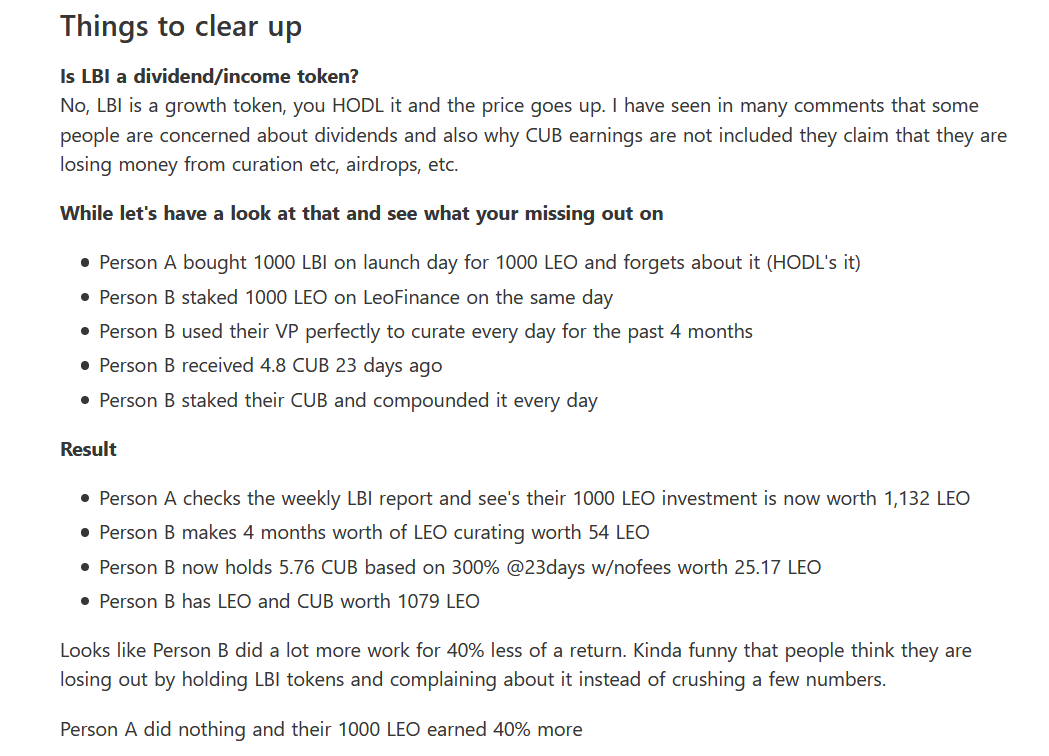 This is a clear example of passive income. You buy LBI and then do nothing. You do exactly what this guy does. Put your feet on the table why the money is pouring in then compound it to make more. This is the only way to build up wealth and gain your financial freedom.

A new mindset is needed here. Those who are used to blaming the government for everything and waiting for handouts need to rethink their strategy. Some time spent learning can change your life forever, but you need to be willing to learn and use your knowledge to lay the foundation of your future.

The latest claimdrop has put quite a few people to test as it hasn't been the regular one we're used to with. Some knowledge was needed in order to move your CUB to Den, in case you didn't want to invest more to be able to farm.

Now it's seen almost a month or so, since CUB DeFi was launched and blog posts about results, strategies, tutorials are pouring. Skeptics have the proof they needed to believe the platform is a good thing and not a black hole in which you pour money in and get nothing. The golden opportunity that was offered to us the first few days is gone, but it's still profitable to invest time in funds in it.

It's undeniable the change cryptocurrency and blockchain technology has brought in our life. This is the future, it's going to save a lot of lives every year, pull out people from poverty, but it's not something that is automated and will happen no matter what. If you want to change your future, you need a new mindset, need to work on it, do your part, learn as much as you can and build every day.

We've had several post detailing how the users built up their wealth. It's easy to envy these people now that they are rich. You need to look at he other side of the medal to see the hard work they put into it to get where they are now. It depends on you, only you as no one is going to do it instead of you.