I recently read the content of Kevin Kelly, who wrote about 1000 true fans. This is a popular concept among marketers and startup people for getting the initial traction for the product or service. Many creators who write, create, paint, and stream content use this concept to build their following and supporters. So if you get 1000 people to support you as a creator, you are set from the financial side.

Now let us come back to the context of 1000 fans for Hive. How dedicated would 1000 fans change Hive? Moreover, does that help the ecosystem in general? I am sure by now, we have more than 10K people worldwide contributing to the Hive and keeping the cash flow in and out. However, what makes the 1000 accurate users contribute to the growth? Does that even make any sense in the context of the growth of the Hive?

Let us discuss the effect of the 1000 True Fans from the context of Hive. 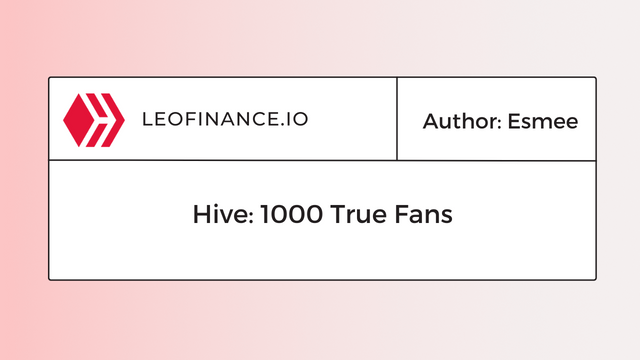 Fans who Stake, Delegate, and Power Up

Every organization or the community needs people who take the investment into the system seriously. So we need people who stake, delegate, and put the power back into the community. As you can see, Hive already has that with the witness system. Moreover, they also have the accounts who do the curation and accept the staking and delegation of the power to the other accounts—this keeps the system going.

Moreover, when you have some enthusiastic fans like these, the delegation pays off. Your time for the staking and the powering up constantly helps out with the solid fans or people helping with the account. Sometimes, having a good set of fans or users pays off with the system moving like a cycle. I have realized that those who put up efforts on keeping the community moving are one of those 1000 true fans.

Using the Hive Dollar and Hive in Utility

Most of the people who are loyal to Hive are going to be using the hive and hive dollar as a part of some of the payment gateway. Something that needs to be done seriously because if you take things into use, the currency will move in circulation. This is what most of the blockchains are desperately trying to find with their content and also for their usage. However, it all comes down to how you choose to do with utility value.

Another thing that I have realized from experience is that utility creates market demand. This means the people who are loyal to the chain are the people who drive most of the growth. They are the ones who make new people come into the chain and use it for the things that people want to be using it—making the utility use case matter, especially from the loyal fans.

Supporting the Ecosystem from Cashflow Context

We need new people every year because existing fans may eventually be burned out. Moreover, that part we have to realize for the ecosystem. When you have the cash flow and the actions taken on the blockchain going so smooth, that would add up. Some of the people planning to work on their ecosystem compete with plenty of chains out there rather than having more new people in community matters.

Say the existing people choose to add the cash flow into the chain. We ask the users to buy the tokens when they choose to invest in the tribe. So that sort of action helps the Hive in general. And then a new batch of the users become the true fans. However, 1000 as a number is mentally modeled for the sake of it. We need a constant stream of new members for those things to work out.

I think Kevin Kelly got the concept right. We have a regular batch of faithful fans to anything that keeps things going for that particular thing. In this case, we have a hive where we need a constant stream of new users who can invest in the Hive.

What is your opinion?