HIVESTATS: 30 Days in Retrospect - Playing with the numbers

Beginning to track my growth on the Hive blockchain is something I'm no used to. Thanks to the creators of Hivestats.io as I'm beginning to enjoy the dapp the more. Getting to learn more of what is happening on my account is something exciting. As a female tech novice, this is something worth a celebration. Next step would be to dip a feet into making some investments here on Hive o see how it goes.

The changes in our economy has awakened the need to be more involved. I want to learn more about blockchain and cryptocurreinceis and starting to fully understand the workings on hive would be a good spot to start from.

My last 30 days on Hive Blockchain
I;ve been so challenged to up my engagement on Hive as I regularly view my performances on Hivestats. I wish I could be making this review on weekly basis but, I'm not really in love with numbers. Making this post took as much as 7 hours and that's ridiculous. I would have writtedn some two to three posts over that time. I'm not regretting though, there's always a staggering start. I'll get use to it over time nand then, I hope the quality of this will improve.

Reading Hivestats reviews by @coyotelation and @uyobong is always inspiring. My hat's off for them. It's a task to up my analytical wriing skills and I'll give in my best to doing it. Now to the real deal - my Hive account in the last 30 days. 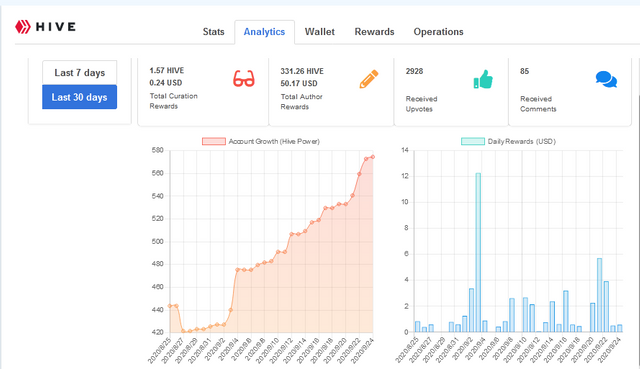 In the last thirty (30) days, I have been able to get 330.96 HIVE which is equivalent to 50.12 USD, as a total Author reward, 1.57 HIve equivalent to 0.24 USD as my total curation reward. That's the first time I really noticed that my upvotes on HIVE are really worth something tangible.

I am trying to be consistent with cntent creation on Hive but my weekends suffer a lot. In the past 30 days, my posts earned over 2k upcotes and number of comments received is over 80.n Thanks to all Hivers out there giving their time to read and engage my posts. I'll return that gesture in the coming months.

I also earned some good amounts of Hive tokens in the last 30 days. Thanks to the About Hive dapps contest that I participated that earned me some LEO tokens. I learnt LEo is making waves. I'm trying to understand whats's going on ther and I hope I do.

A whooping 3.02 USD was a huge amount to be earned from Hive tokens. Interestingly, the total hive-engine rewards earned were as a result of Leo and Hive tokens put together and I can say that I am proud of that increase.

These may not be the best like I have said before, but I am keeping a review so I can get some comment from others on how to improve my account on Hive.

Looking forward to better derails in the future.