The list of the most rewarded Leo authors came out a day ago,(a day ago from when i wrote the post) and i couldn't be happier. To begin with, the list from a top 20 became a top 25 and now a top 30 which is pretty awesome if you ask me.

To tell you the truth i had the tab opened to read it but due to the enormous amount of tabs i usually open for curation (30-40) it was lost in that pile! It's funny though that one of those tabs was @katerinaramm post which is related to that list.

You see katerina managed to get on that list in 29th place and she deserves to be even higher in my opinion. To add to that, i know katerina as she is Greek like me, so it's nice to see my fellows climb the ranks!

In her post, she mentioned my name as somebody who was also on that list so you can imagine my surprise. After reading her posts i immediately discover the LEO one in that pile of open tabs and saw my account name.

Before i start sharing my feelings, my "secrets" of how did i achieve this, and also what that means for me let me tell you a few things you need to know about the list briefly.

So as you know the list has the top 30 LEO Authors based on their rewards and the rewards are both Leo and the Hive once accumulating in 30 days. Also, the stats are for the prices of $0.50 and $0.13. And ofc we need to thank @dalz for making that list every month!

LEO Authors Are the Most Rewarded Users on Hive

How Did I Achieve This

Honestly speaking i don't know if there is a certain secret of success or something similar. I think for me the 3 main factors that led to those results were hard work, consistency, engagement.

When i say consistency for example, i mean to try and be active as much as you can and be consistent on your writing schedule or curating one depending on your stake ofc.

I know for a fact that consistency in a way is tied to free time so i know many of you find it tough to be active and write a post for example. You need to manage your time accordingly and try for the best.

I, for example, have a lot of free time these couple of months so i treat LEO and Hive like it's my job, i invest the same amount of hours that i would spend if i was working part-time or even full time!

As i said i invest the same amount of hours in here like i am working a part-time job or full time. That's what i call hard work and to add to that if you know me the vast majority of my posts are over 400 words long and i publish daily.

That takes a lot of dedication and it's not easy to think and write something everyday, i think many of you already know it by now. In a way though, it is a little bit easier for me because i consider it as my hobby.

Finally, in case you are wondering i don't tend to write more than 1 post daily under the Leo tag and generally speaking. When i have quite the free time or there are a lot of things going on i may write 2 but even then, those 2 will be in different communities!

That plays a huge role for me cause i believe that without interaction and engagement mostly nobody has a chance to shine in here. Even if you are the best in terms of writing content, if you don't interact with your followers or other people, i wouldn't bother to read even your posts let alone make a comment!

It may be harsh but i think it's fair. Try to interact as much as possible, read other's people posts make some quality comments or head to the discord channels and do your thing there. 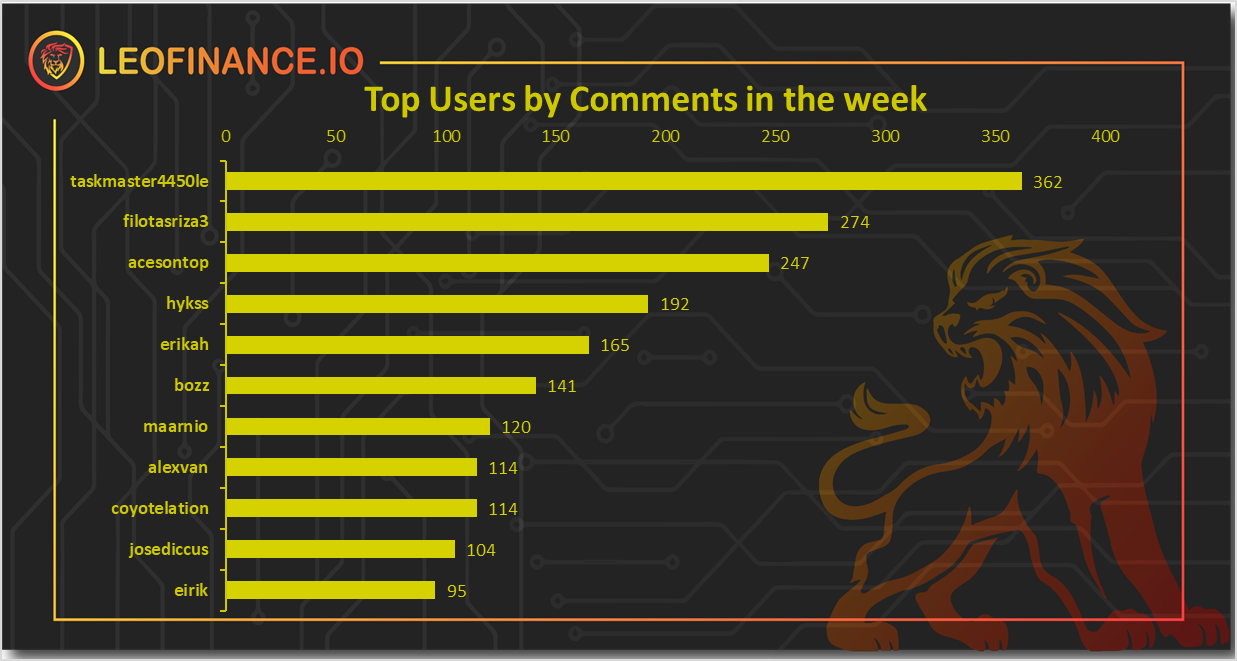 For example, i don't have much time to talk to the discord servers but i sure as hell read and comment on other people's posts as you can see above. I on @leo.stats list for 2-3 months straight at i think.

I know that there are times of frustration for everyone. You may think that your content is undervalued, that other people are earning way more than you with shitty content and you may be 100% on spot.

That isn't a reason to give up though. Try to build a name for yourself and create quality posts without being a plagiarist and the rest will follow.

For example, i am extremely grateful to @trumpman for supporting my content and i am always happily surprised when i see and upvote from the Toruk (@onealfa.leo).

I am also thankful to all of you who support me and comment on my posts. I know that i tend to give you some late replies but hey i always reply back! :p

Last but not least be thankful "to the list" itself. All of the users there deserve to be on that list. Some of them have a huge stake but still, they post some of the most valuable articles, valuable not only for LEO but for the whole Hive ecosystem.

Others are working behind the scenes to make leo great and finally, there are many users on that list with under 10k lp, in other works with not much stake like @cflclosers @hitmeasap @chekohler @r1s2g3 @celi130 @katerinaramm @gualteramarelo @behiver @acesontop

All of these awesome creators made it by working hard and creating valuable posts and ofc interacting with others. But if you don't believe just check their posts and tell me! I bet you must have read at least one of their posts!

What That Means For Me

Once again i made this post quite lengthy but yolo! So to be on that list and in that particular place means the world to me. It's proof that my hard works pay off and that it motivates me to keep on trying.

In terms of euro that translates to 246 to 328 euros. In the best-case scenario, it's like a bad paying part-time job in Greece. This isn't bad though because we are talking about actual money, that i could spend on food or even pay rent.

Just imagine the potential if Leo reaches 1$ or even better if both hive and Leo reach 1$. I think that would be equivalent to over 500 per month! Something that can actually help me a lot!

Noise.Cash: Results after a Week and an Honest Opinion