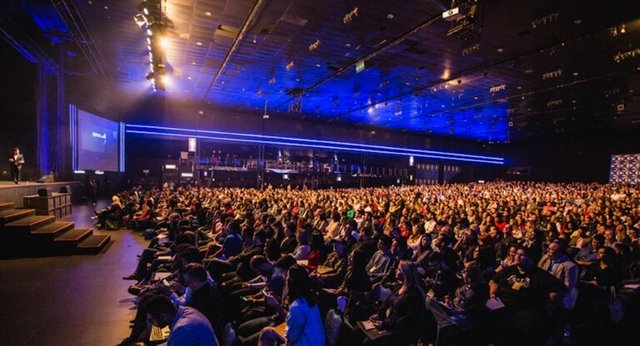 I think that all of you have either visited an event like that or maybe watched it online. I on the other hand have done a lot of things regarding those types of events.

I have been a visitor both online and where the event took place, i have been a volunteer and i have taken part in representing a company. Currently, i am also a volunteer on the organization committee on a TEDx.

So as you can see i know one thing or two but i still have a lot to learn. In this post i wanted to address some of the issues that events like these have and maybe who knows, someday one of you may organize their own event and this post can be proved helpful to them.

To begin with, nowadays we got tons of events, most of which have a small fee. I get that, cause finding sponsorships isn't that easy, especially during the covid years. That's only for the events that are organized with the help of sponsors and volunteers, there other events that aim to gain some profits with these tickets.

Now, one thing that you may don't know and is an ugly truth as well, is that a lot of people that either present something or even being a volunteer at these events followed a different procedure than the usual one.

Turns out that being a volunteer at a big event or even being part of it by presenting something, speaking and such is a huge boost on your resume. Thus, a lot of people wanna be part of it. The usual procedure is to either get called by the committee responsible for that or filling out a form and another committee will judge if you are suitable or not.

What happens in reality though, is that some people because they "know a guy" manage to be part of the event without doing anything. A lot of times they don't even care about the event and the purpose, they only care about their resume.

I have seen famous Greek people that are considered role models ask a whole lot of money in order to just say a few words on philanthropist events for young kids that got cancer. Well, what do you think about that?

Now let's say that an event manages to get some sponsorships but at the same time they need to spend some of the money to catering for the guests and the team. A lot of times some of the companies that some committees pay for their services are actually their friends and to make matters worse they may earn a piece of the pie as well.

Now let's get down to the actual event and its thematology. 95% of the events and speeches i have watched were a total waste of time. People talked without stating actual facts, misleading others and generally speaking providing zero useful info. Let me give some examples.

I was at an event about Greek Entrepreneurship and the specific panel i was watching has as its subject "Hospitality & Tourism in Greece". I think the speech was 1 hour long and basically, 20-30 minutes gone away by the speakers "selling" us their companies and hotels.

The other half was a generic talk about how Greece has a lot of tourists and that it is an ideal place for hotels and hospitality in general to flourish. Well, if we didn't believe that we wouldn't have been to the event. You didn't reveal the secret of success you were saying things that we all know since our birth.

Then a guy started talking about how important social media and the internet are if you have a hotel. The only thing he said was that you need to have an online presence in order to attract more customers and you may also need to use ads.

Nothing about what exactly to look for, how to use ads any tips, just a completely generic talk and this is something you gonna witness at most of these events.

In other words, we have tons of events, with people trying to promote their companies, aiming to enrich their CV and cover their need to talk in front of people and get applauds. Ahh and maybe earn some money and more fame along the way.

And don't let me get started about the new thing called gender balance. On some events they try even though they are not forced by someone, to have the same numbers of men and women as speakers. This is something quite absurd and sexist if you ask me.

To understand this better, let's say that 10 people sign the form and want to be part of the event as speakers. Let's say for the sake of it that all have something to say and their resume is awesome. If 7 are men and 3 are women, just because we want gender balance we will say no to 2 men. (this can go vice-versa)

We then will wait for more women or we gonna approach some women. In other words, it's like we are throwing in the garbage not only the work of these 2 men but at the same time, we throw our own form procedure.

I am honestly sick and tired of all of these and i strongly suggest to anyone that wanna be part of an event to do it because he believes in the purposes of the events and at the same time he/she wants to help people.

At the same time as viewers, we need to stop paying attention and giving value to events with generic information and push for events that can actually teach us something and proving us with genuine information to move further.

What Do you think?

Tell me about your new favorite Crypto or Hive Token

Teamwork in Businesses: Problems that can Arise and Solutions

I get that, cause finding sponsorships isn't that easy, especially during the covid years.

On some events they try even though they are not forced by someone, to have the same numbers of men and women as speakers.

Yeah, what a dumb criterion. Sums up 2021 pretty accurately.

Hi @filotasriza3, you were just shared some LUV thanks to @lordneroo. Having at least 5 LUV in your wallet enables you to give up to 3 LUV per day, for free. See the LUV tokens in your wallet at https://hive-engine.com or learn about LUV at https://peakd.com/@luvshares

Sorry, you're out of LUV tokens to be sent today. Try tomorrow. (Having at least 5 LUV in your wallet allows you to freely give 3 per day.)