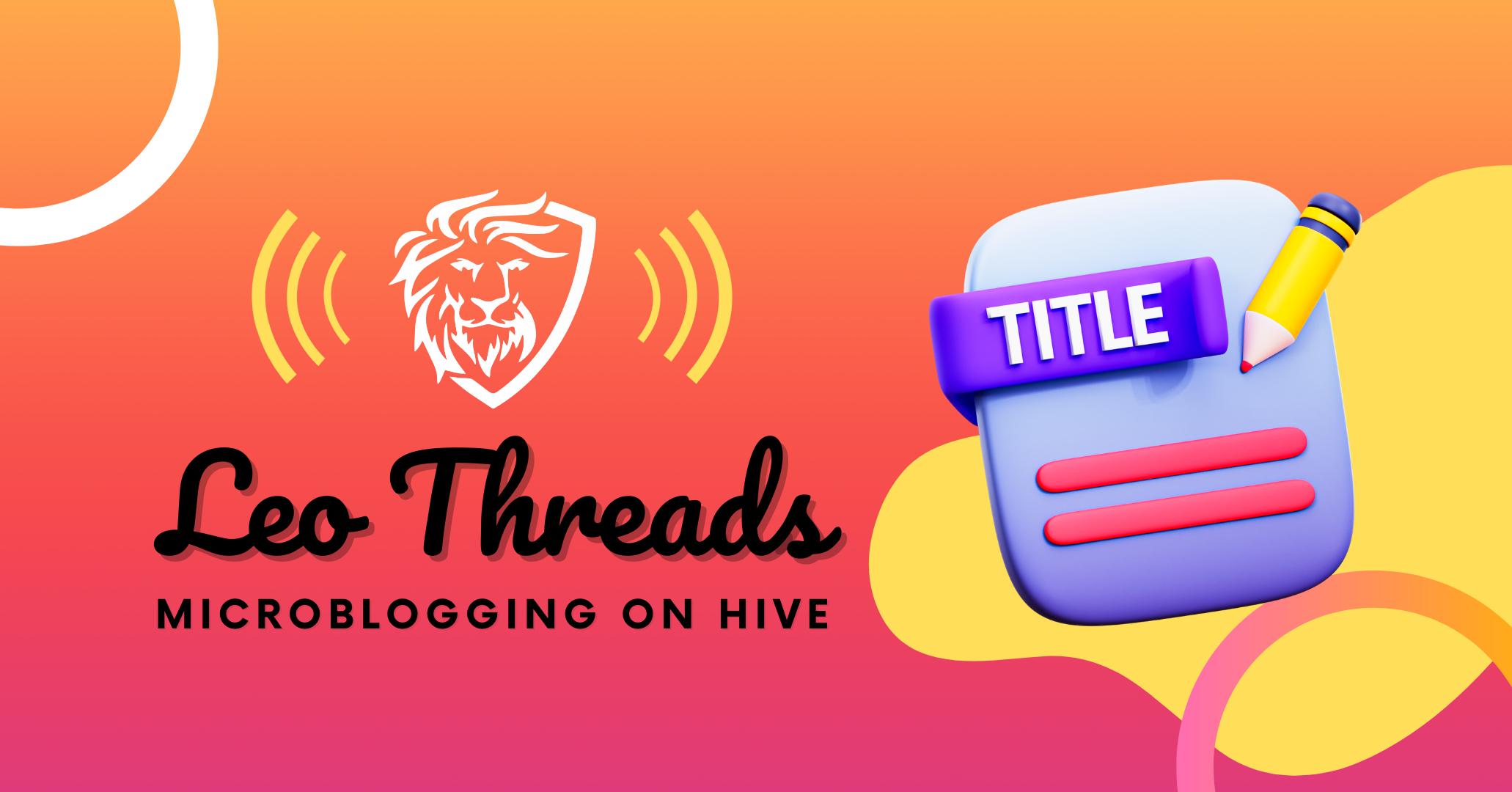 Microblogging is a great way to share your thoughts and connect with like-minded people. It's also a great tool for learning about the things that interest you. For example, the most famous microblogging platform Twitter is designed to be easy to use and fast, making it simple for anyone to share what they're thinking about or experiencing in real-time. It can also help you build a community of people who have similar interests as you do— and that's what makes Twitter so much fun! Now I don't want to delve deep into the issues of the current web2 platforms. Users don't own their identity, data, and content. They don't make as much as the platform makes using their own property. That definitely calls for a decentralized alternative that solves all those problems and empowers users without the need for an intermediary.

After 18 months of extensive development, the Leo Finance team is launching the first iteration of Project Blank today aka Leo Threads. It is a microblogging platform within LeoFinance.io. The success of threads will pave the path for a standalone microblogging application. This is going to be a massive addition to Hive's ecosystem. In a few hours, threads functionality will be launched which can be accessed by anyone with a Hive account. 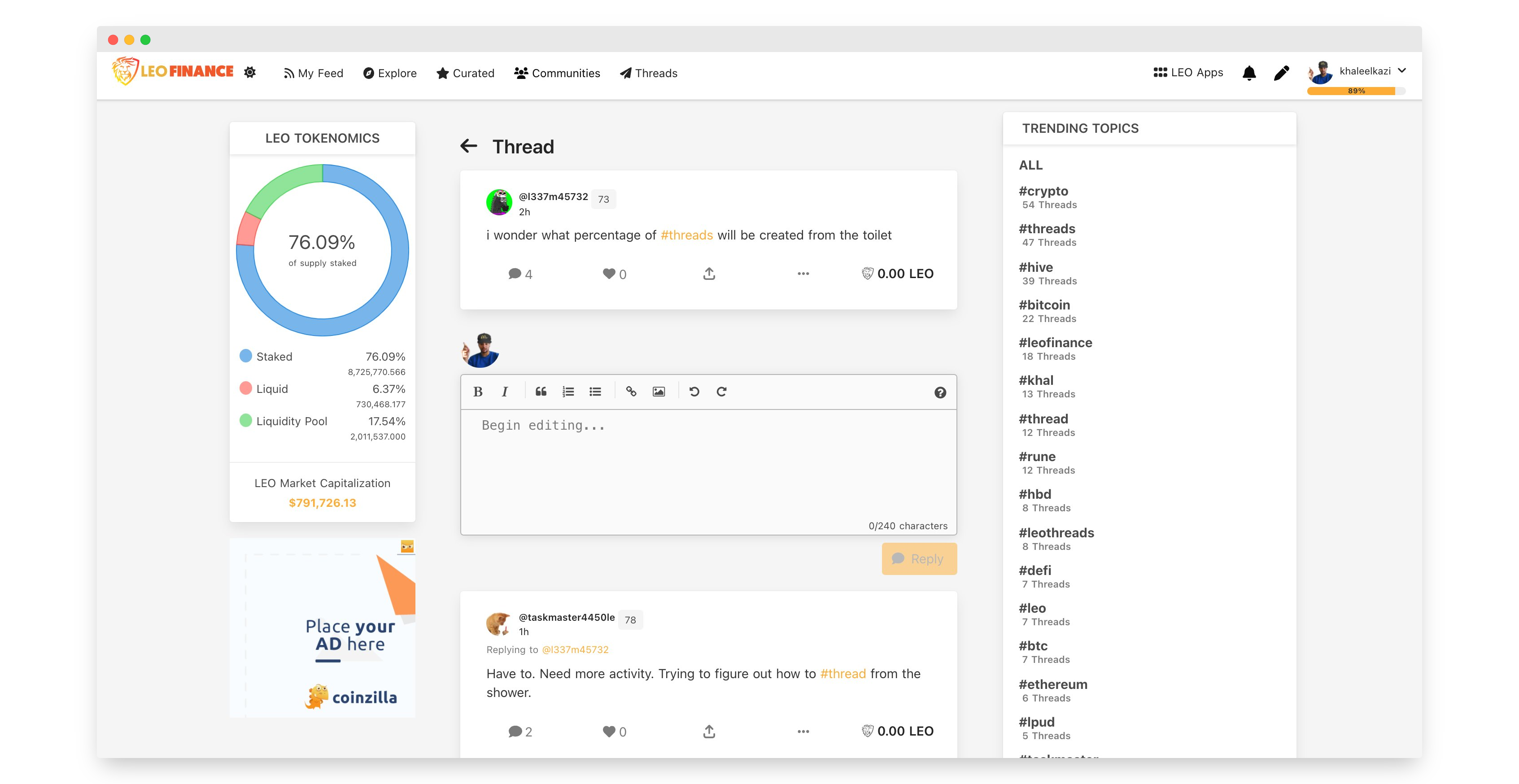 All You Need To Know

Since I am a Leo Ambassador, I was one of the few lucky ones who got access to information that others might not have. Threads will supercharge the engagement on Leo Finance by 10x. Here's the list of things you need to know before the launch:

Hive blockchain has successfully sustained a lot of transactions happening at once. The introduction of this new feature will put the blockchain to the test in terms of scalability. To handle the traffic and no of transactions on a Twitter-like app, a blockchain is required to be infinitely scalable. As more people start using threads, we might get an idea about how much we need to improve in this area.

Why LeoThreads Will Be Popular?

Here are a few basic reasons why you should Leo Threads will become very popular on Hive:

I am so excited about this development. Have been flexing my palm muscles to prepare for the launch. I just love Twitter and spend a good amount of my time there nowadays. Will Leo Threads change that? We will have to wait and see. If we crash the LeoFinance website on the launch day itself, it would be crazy imo. 😂 What do you think guys? Are you ready for one of the biggest launches of the Leo Finance Ecosystem? Comment below!!!

👏🏻 Can’t wait! When is the launch exactly?

Ya it's in the sooniverse xD haha

As always. xD But today soon is now.

It's here (if you didn't already know, lol)

I have been looking forward to it since it was announced last year. As I use dbuzz a lot, I would really love to see what makes it different. I generally love creating short post so this might do a lot for me on being consistent on the Hive community. Can't wait to be among the first set of users on thread. It's almost here!

Me too mate. I don't use Dbuzz that much but I am excited about Leo Threads especially because I love what this community does. It's going to be amazing!!! Can't wait now.

Thank you so much @luizeba.

Great to see so many people excited about the release of threads! I even have Twitter notifications on to catch it as soon as it goes live

Smart move man xD Pretty sure they are going to post this on Twitter as soon as it is live.

I am anticipating for the launch of threads and I can't wait to try out its features. New apps and techs excites me! I won't be surprised if we end up crashing it on the launch day (which I thought was supposed to be today) 😆

Haha. That's cool mate. Same here!!! As far as I know, today is the launch day so be ready with your keyboards. 🔥

We haven't even asked what link leads there...

Yes, it's going to be a blast mate! Very interesting times for LeoFinance.

Great news, this is a big advancement.

Yay! 🤗
Your content has been boosted with Ecency Points, by @finguru.
Use Ecency daily to boost your growth on platform!

I do kind of want this
But with the way threads work could you in theory just add to the thread for a debate with anyone about certain crypto and such.
So this is exciting