What Are The Best-In-Slot Workers For The Splinterlands Expansion 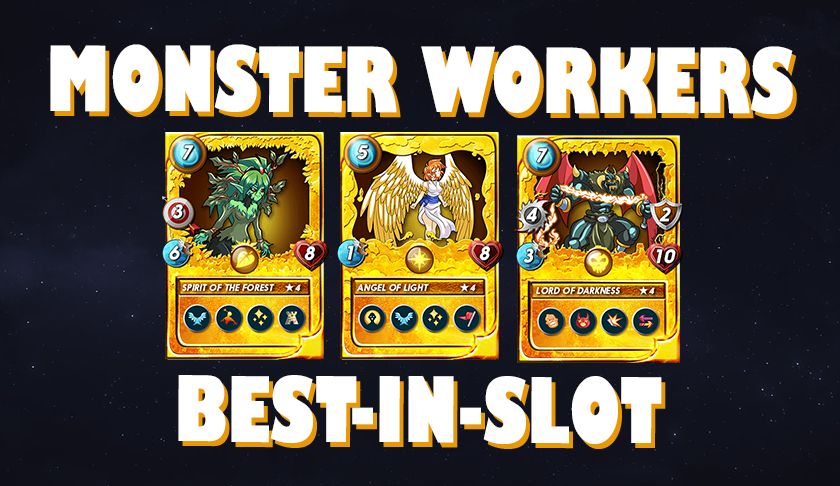 This is a follow-up post to my speculation from yesterday about the upcoming land expansion of Splinterlands, where we will own NFT land plots to exclusively produce Spells and Items for the card game. Each land plot will feature one building, that we can build with resources and upgrade and maintain with Dark Energy Crystal (DEC) burning. Most buildings will require a monster worker to function and the better the monster, the better will be its bonuses for the buildings production.

After the AMA from yesterday, we know a lot more about how this will work and can anticipate which cards will likely become the Best-In-Slot for a specific land plot.

Edition, rarity, level and foil will be the major factor in defining the monster worker bonus for the land plots. This results in max level, legendary, Alpha and Promo goldfoil cards being the potentially best workers in the land expansion.

Each land plot will favor a specific splinter via its Terrain Type. Lakes and Rivers, for example, will probably work best with a monster from the Water splinter. If you are planning to run a Tract (100 land plots) or even a Region (1000 land plots), you will very likely need monster workers for each splinter, to get the maximum return from your land production.

This is all still based upon the super early information available and might change until the release of the land expansion. On the other hand, it makes a lot of sense to do it this way.

The Alpha goldfoil legendaries are the first cards that come to mind for the Best-In-Slot workers. There are nine different cards in existence that fit into this category, one for the Fire, Water, Earth, Life and Death splinter and four for the Dragon splinter.

The Promo cards are the less obvious cards for the Best-In-Slot position. They do have the same DEC burn value and hence get the same Collection Power value. They will probably be valued the same as Alphas in terms of worker bonuses. Here we get one for Fire, Earth and Death, while the Dragon splinter has four cards (not sure about the Mighty Dricken, I think it has a lower burn value, so I excluded it here). Water and Life have no Promo legendaries.

The prices of all of these cards are already high to super high. Now they will get an even greater purpose. While there are a whooping eight different Dragon cards available for the Best-In-Slot position, there are only two for Fire, Earth and Death and even just one option for Water and Life. With this in mind, it will be very interesting to see how the market of these cards will develop until the land expansion and even more so after its final release in Q2/Q3 2021.