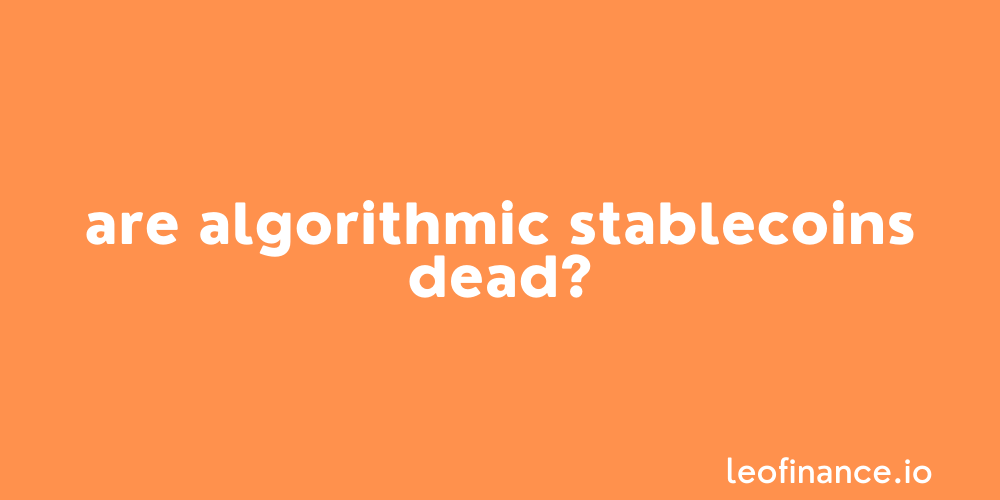 Contrary to the mainstream narrative, the answer is no. Algorithmic stablecoins are not dead.

No doubt you’ve read the endless stream of mainstream news articles telling you that algorithmic stablecoins are dead.

“Algorithmic stablecoins are dead and we NEED governments and regulators to come and save the poor, uneducated investors who are losing money.”

I want to make it extremely clear that I have no problem with government regulations coming to crypto and stablecoins in general.

Turns out I’m not actually a crazy anarchist who sees elected governments providing key services to the citizens that they represent.

But as we’ve spoken about on the blog before when I introduced the concept of parallel running financial systems… it really won’t matter in the long run.

When I say parallel running financial systems, this is what I mean:

Each running side by side and just like when it comes to Web3 dApps, these parallel running systems simply offering a choice.

Contrary to popular belief, not everyone in society needs someone looking over their shoulder to make sure they make an intelligent decision.

And with parallel running financial systems, people have the opportunity to decide whether they interact with the safe, closed and regulated system.

Or take full responsibility for themselves and their actions by choosing to interact with that housed on the decentralised web.

For me, this concept is one of the most exciting prospects not just in finance or tech, but for society as a whole.

Put simply, there is no need to debate freedom because the tech now offers you a clear choice.

Running the risk of sounding like a broken record, I’ll say what’s on my mind again.

Algorithmic stablecoins are the only way forward.

And the best algorithmic stablecoin that hasn’t imploded due to unsustainable tokenomics or market forced, is Hive Backed Dollars (HBD).

But have you read a single story that even mentions the existence of HBD?

As we don’t yet have the liquidity available to go truly mainstream, I’m somewhat okay with being able to continue building our community owned base, under the radar.

But while doing that, there is something that I feel like has left the front-page of LeoFinance too quickly.

This being the fact that despite the marketwide dip, HBD remains pegged, stable to USD $1 worth of HIVE and inside the parallel that runs out of reach of regulators.

I’d also like to bring back the fact that liquidity in the pHBD-USDC LP on PolyCub has broken $400K in liquidity.

Seeing liquidity grow in the midst of everything that has gone down surrounding UST and the wider crypto market is somewhat astounding.

Maybe it’s not only the Hive community that is starting to understand the fact that HBD is completely different from UST, with safeguards already having been put in place to prevent the death spiralling event that we saw occur over there?

When it comes to propelling HBD to the next level, it’s now all about ensuring that there is liquidity available for mainstream investors looking for yield on their algorithmic stablecoins, to be able to comfortably get in and out.

The LeoFinance team has set a goal of achieving $500K liquidity within the LP by May - A number that is firmly within their grasp despite the sentiment.

Final thoughts on the death of algorithmic stablecoins

So are algorithmic stablecoins dead?

Not on your life son!

It’s true that Terra (LUNA)’s UST may be dead.

But in the form of Hive Backed Dollars (HBD), the holy grail of an algorithmic stablecoin running in the decentralised parallel financial system untouchable by regulators is still going strong.

With the liquidity being generated by the pHBD-USDC LP on PolyCub starting to allow large investors to comfortably and permissionlessly move their funds in and out, Hive can’t be ignored forever.

Thanks to HBD and the Hive blockchain, the future of algorithmic stablecoins is now.

The current UST case showed the dangers of stablecoins and that code alone might not suffice to react in time if not well parametrized and ready for border cases. HBD with its max 10% from Hive supply I think has a low probability of turning upside down this entire ecosystem.

What we've learned is that if there is a weakness in the setup, then the market WILL exploit it.

The free market is brutal.

Hey @bhattg, I'd love to hear your thoughts on the potential death of algorithmic stablecoins?

This is why the pHBD:USDC LP on PolyCub is so important.

Helping to provide the liquidity required to at least see if HBD can stand the heat.

HBD has a great chance to revive that thought, stable coins arnt dead at all, it's just a twist of faith and bad decisions. Hopefully we've seen the Leofinance team make a lot of good decisions concerning the HBD and I'm sure we're crushing that target soon.

Keep watching the liquidity in that pHBD:USDC LP.

If I did not know better and seen it first hand in the form of HBD, I think I may be well to say there's nothing out there but in here... It's a full blown crowd of wild parties! Ha!

I'm still shocked that not even one single crypto journalist has taken the community focused Hive narrative and run with it.

Like come on, in a world of corporate sharks taking over, the story of Hive really is beautiful!

Perhaps they need their glasses checked or their eyes lasered

That Hive documentary will need to be featured at Cannes and win an award before people will pay attention to it. Even if people don't pay attention to Hive after that, we can market the hell out of Hive on the strength of a Cannes Film Festival Award or Nomination.

The good thing is we are flying under the radar now and can be well prepared by the time we go mainstream.

It's all about building liquidity in HBD now.

Yes, that's the main focus now and the phbd pool is doing quite well to help solve our liquidity issue.

A big thumbs up to the leo team for their collective effort.

HBD liquidity is just as important at Tribaldex as it is at SushiSwap over Polygon (MATIC). pHBD has priority, but we can't neglect native HBD.

I think so, but they are not reliable now

Would you consider HIVE itself to be reliable?

The situation with LUNA made me appreciate HBD even more. Aaand, yeah I hope UST is dead and so is LUNA.

Of course I feel bad for those that lost money - On a purely human level, what's happened is horrendous.

But from an overall crypto market point of view, this is a positive.

The market has cut away the weak and made the rest of the herd stronger.

HBD is alive and living well so far. The current bear is proof that our peg is sustainable.

I think more will come and go, but this is definitely a lesson for anyone just trusting them right off the rip without understanding how they actually work.

Yep, I agree that plenty more will come and go.

There's no doubt that people want them and a market is just waiting to be filled by a project that gets it right.

Looking forward to seeing what innovations the future brings :)

I wrote about this earlier today. My thoughts, summed:

I'm a big fan of your content and your latest thoughts on stablecoins is another great piece.

Good to see you came back to using the LeoFinance front-end too!

I agree with your thoughts around stripping human interaction.

I'd go a step further and say that even the money used in any stabilisation process can't have a link back to a human or company at all.

This is why the stabiliser and its links to the Hive DAO is a great start.

HBD just needs to be able to scale.

Thanks for your words and support. I really appreciate both.

HBD just needs to be able to scale.

...that's something I really haven't thought about, Hive scaling, but since you stuck it in my head I'll let it brew around. :)

This is so cool:

parallel running systems simply offering a choice.
Contrary to popular belief, not everyone in society needs someone looking over their shoulder to make sure they make an intelligent decision.
And with parallel running financial systems, people have the opportunity to decide whether they interact with the safe, closed and regulated system.
Or take full responsibility for themselves and their actions by choosing to interact with that housed on the decentralised web. For me, this concept is one of the most exciting prospects not just in finance or tech, but for society as a whole.

This is also Super COol:

This being the fact that despite the marketwide dip, HBD remains pegged, stable to USD $1 worth of HIVE and inside the parallel that runs out of reach of regulators.
I’d also like to bring back the fact that liquidity in the pHBD-USDC LP on PolyCub has broken $400K in liquidity.

As we don’t yet have the liquidity available to go truly mainstream, I’m somewhat okay with being able to continue building our community owned base, under the radar.

Your point about "parallel running financial systems" is very important. As long as people have options, they are free to go with what works best for them. This is one reason why legal tender laws are actually bad for a society. It also places a check on the centralized system since it lets The People make sure there is no funny business taking place under the centralized financial system.

Stablecoins came into existence because people feared the volatility of Bitcoin and Ethereum. Part of that volatility is due to how prices are measured: usually in USD. Would price volatility exist when we compare cryptocurrencies on their own terms? Yes. Would that price volatility be as bad? We don't know yet. At worst, it would be as volatile as what exists in ForEx (fiat money trading against other fiat money). Crypto against fiat money or vice versa seems to make the volatility look worse than it really is. Or am I being naive in this regard?

I'm asking because if fiat money disappears volatility may still exist between cryptocurencies, but would it be the kind of volatility we accept for markets such as ForEx? And if this is the case, would the need for stablecoins themselves disappear along with the disappearing fiat currencies?