AUD/USD Back In-Play on Monday

Its' Friday night in Australia and after settling in for an evening of tennis on the telly, I had to write about the Aussie dollar's reversal that's primed and ready to be traded next week.

After AUD/USD printed clean price action as the pair rejected off daily resistance, we've recently seen some renewed strength in the Aussie.

Take a look at the Aussie daily chart below: 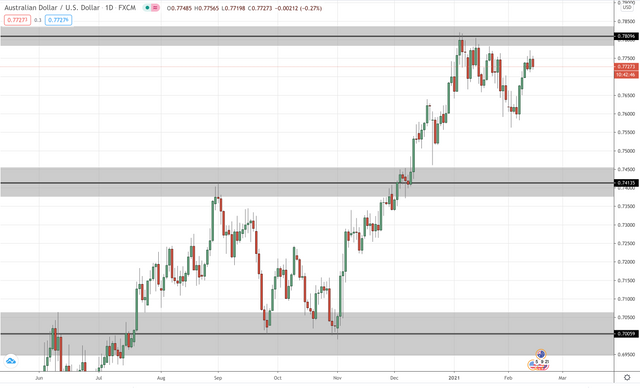 I always say it doesn't matter how price moves between zones and that we only need to pay attention when everyone else is around support/resistance zones.

Well, it's almost time to pay attention to the Aussie again.

Next week we're going to be looking for a short as long as price remains below this daily resistance zone.

If price tests the zone as resistance and it holds, we'll then look to zoom into an hourly chart and find a short entry.

We'd look for an area of short term support that when retested as resistance, could be used as an entry point.

It's always the same strategy guys.

Just keep your eye on the higher time frame zones and when they're in play, go hard.