Bitcoin - Let's See How Bullish This Beast Really Is

Ah, it feels good to clean up my Bitcoin chart.

All levels gone except for the 20K breakout level and this interesting zone around 32K that I wanted to talk about in today's blog.

Take a look at the Bitcoin daily chart below. 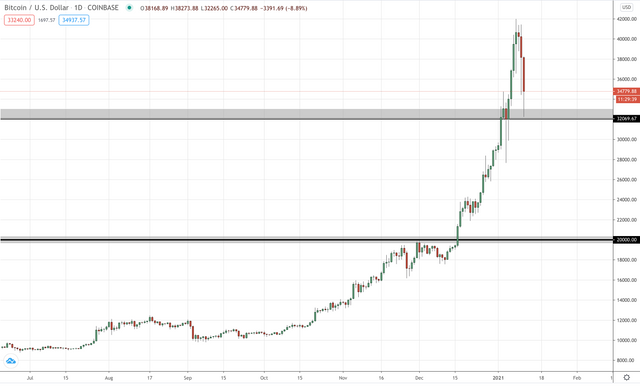 Bitcoin has been ripping faces off lately and after retesting the yearly open, price continued higher until capping out at 40K.

I always say it doesn't really matter how a market moves between support and resistance zones, but rather what it does when it gets to them.

In this case, take a look at the 32K zone I've marked.

With a lack of historical swing highs or lows as Bitcoin continues to break new ground, there's not many levels we can mark on our chart.

But amongst the row of green daily candles, there is one bit bearish candle amongst it with a body that stands out like dog's balls.

And with that zone marked on the chart, take a look at where today's correction fell exactly into before bouncing.

On a chart with a distinct lack of higher time frame support/resistance zones that we can use to trade around, this is a good one to keep an eye on.

Let's see how bullish this beast really is.