We've all been watching Bitcoin rip faces off this week, with today price pausing for a bit of a breather.

Take a look at the Bitcoin price action on the hourly chart below and you'll see what I'm talking about. 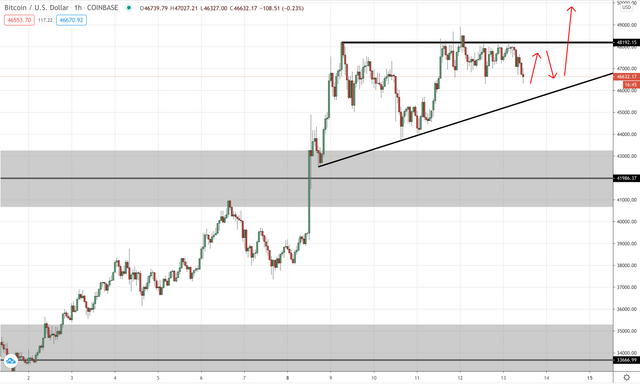 What is an Ascending Triangle?

In a bullish trend, ascending triangles are some of the most reliable technical patterns.

Just like we see on the Bitcoin chart above, when price is in such a bullish trend and an ascending triangle forms, breakouts to the upside should be treated as continuation signals.

So with a bullish trend in place, we should have a series of higher lows and highs that are at the same level to form a flat upper line.

When the bulls fail to break the upper line on the first time, the sellers step in to push price lower.

The lower lows after each touch of resistance however shows the sellers being soaked up in front of our eyes.

What happens when there are no sellers left and price reaches resistance that final time?

That's right, price has only one place to go and that's vertically up.

It's on these breakouts that most traders will try to take advantage, but if you're an aggressive trader, you may be able to get in early as close to a higher low as you can.

Let's see how this one plays out.