After taking a look at the EOS technicals when Dan Larimer first left Block.One, price had formed a nice horizontal range.

Take a look at the updated daily below: 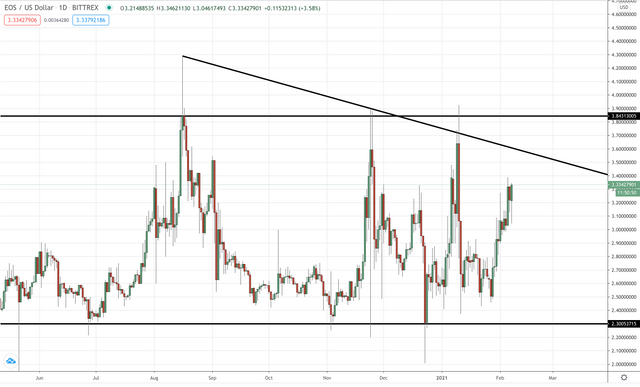 Since we last took a look at EOS, price had tested daily support and bounced off the level.

I was skeptical that the world would stop without Dan Larimer too, but it turns out he isn't the be all and end all ;)

With EOS in such a good place financially after their ICO and loading up on Bitcoin reserves before the recent boost, they literally now have an unlimited archest of cash to do what they want to do.

How they haven't taken further advantage of DeFi with the current mess that is Ethereum gas fees, I'll never know.

But there's no doubting the opportunity is there.

Turning our attention back to the technicals above, we can also see the descending trend line which forms a confluence of resistance at the top of the range.

With EOS lagging behind the general market, this coiling price action could be the catalyst for a nice breakout when it finally comes.

My trading style would give more weight to the horizontal resistance zone than the trend line, so I'll be waiting for a real test and breakout closer to the $4 mark.