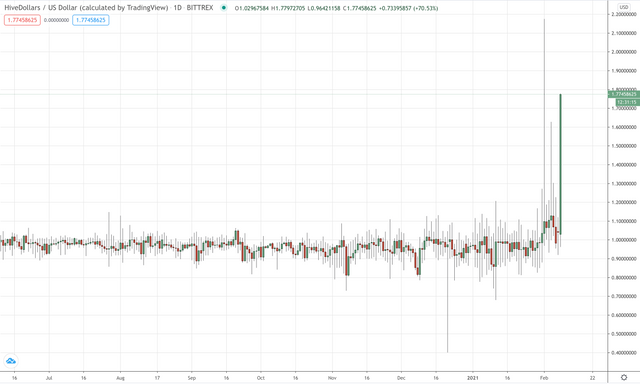 With the right hand side of that chart in mind, the question on everyones lips is what do these pumps mean?

And more importantly, are they a pre-curser to an actual HIVE pump?

Well, as I've said on the blog before, HIVE is a massive tease and we're probably better served keeping our expectations low.

But there is certainly cause for optimism when the major daily support zone I've been sharing for months now, continues to hold: 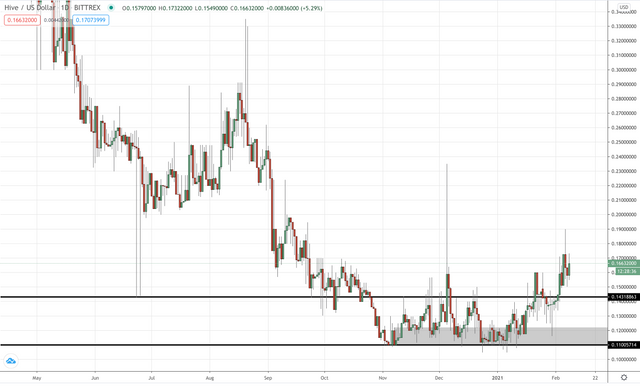 That is certainly some nice price action on the HIVE/USD chart.

See the way that price is starting to step up?

That's the sort of price action that indicates a possible change in trend.

Something we could certainly use right as the Bitcoin dominance chart also looks like turning.

But turning our attention back to what these HBD pumps mean, I've seen a few opinions and am certainly interested to read some opinions of you fundamentals-focused guys within the LeoFinance community.

Do you see them as a pre-curser to a HIVE pump?

As HBD is just a low liquidity coin that's easy to pump by traders who have no understanding or interest in understanding the purpose of HBD, some would say no.

But HIVE itself is also a relatively low liquidity coin that can be easily pumped in this manner.

Especially when retail FOMO starts to set in as we hit peak bull cycle.

We've seen it before in STEEM and I'm of the opinion that we'll likely see this scenario play out again on HIVE.

Anyway, leave your 2c in the comments and in the meantime...