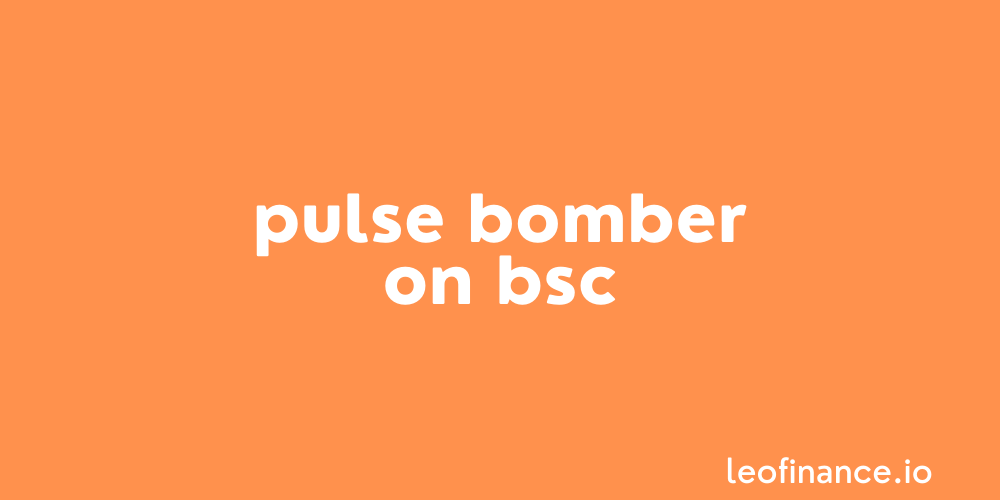 PulseChain (PLS) is an Ethereum fork created by Richard Heart.

It was created to reduce the amount of waste created through burning by utilising Proof of Stake (PoS) miners instead of Proof of Work (PoW).

PulseChain is actually putting itself in a position to become the biggest airdrop of all time.

Although the initial sacrifice period was recently concluded, Pulse Bomber is the next best way to still get involved in the project via the much cheaper Binance Smart Chain (BSC) network.

What is the Pulse Bomber (PULSEBOMBER) token?

Pulse Bomber (PULSEBOMBER) is a new token that was recently launched on BSC.

It is also a crypto mining platform intending to have a Non-Fungible Token (NFT) marketplace, a metaverse game, staking and other opportunities.

The Pulse Bomber creators also have the ambition to become the first mover to the PulseChain Bridge when it launches.

They have created a lot of hype around their intent and all eyes are on them.

Upon their release, they had a considerably low market cap of only $500,000.

However, this does not entirely derail the fact that these new investors have a high chance of seeing between 10x to 50x their initial investment.

The potential of the Pulse Bomber project is due to its tokenomics, mining platform, roadmap, marketing budget, current price and the upcoming PulseChain bridge.

By depositing PULSEBOMBER tokens, users can receive an average of 10% daily return on their investment and earn an APR of up to 3,650%.

Through this application, users are able to hire their own miners or claim rewards within a 24 hour period and earn passive income.

To encourage consistent usage and engagement, they created this 24-hour window where users can either hire more miners or claim their rewards.

By hiring more miners, they can increase their average returns.

The failure to either claim rewards or hire miners within the 24 hour period would lead to a decrease in the efficiency of their existing miners.

Final thoughts on Pulse Bomber and the eventual PulseChain bridge

The Pulse Bomber Bridge has a lot of anticipation set around it.

Thanks to tokens like Pulse Bomber and all of the intense marketing surrounding the project, it adds to the potential that the PulseChain airdrop will be the most rewarding of all time.

Although it's a little too late to sacrifice, Pulse Bomber provides an alternative opportunity to get involved and still earn passively through their mining platform.

Before eventually gaining full PulseChain exposure after the PulseChain bridge is live.

Why not leave a comment on the Pulse Bomber bridge. All comments that add something to the discussion will be upvoted.

This PulseChain (PLS) blog is exclusive to leofinance.io.