What can Hive learn from Terra? More like what can crypto learn from Hive? 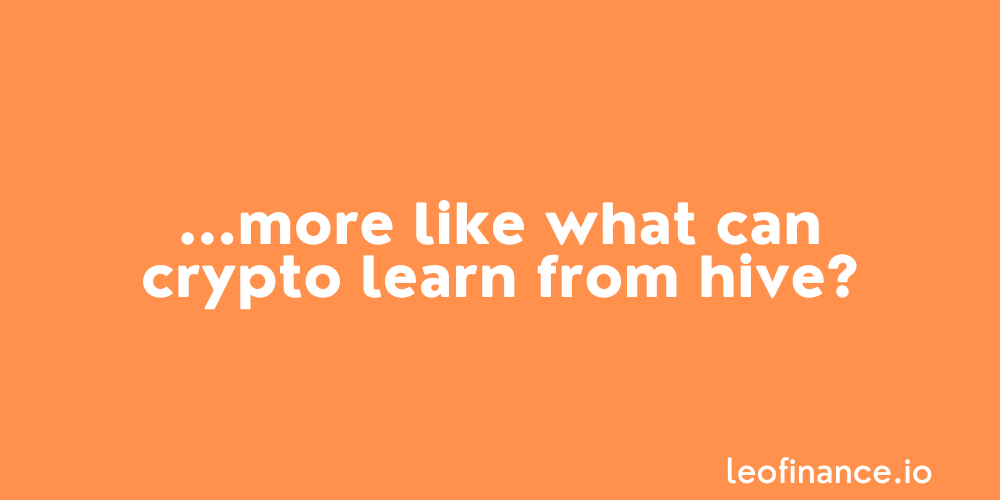 I explore why the LUNA narrative is all wrong and where the biggest lessons can be learnt.

Contrary to popular belief, crypto is not dead.

Sure, we're in the midst of a perfect mini storm that is wreaking absolute havoc, but the genie can’t be shoved back into the bottle now.

What we’re seeing now is nothing more than macro risk-off market conditions globally, combining with this LUNA mess driving panic and liquidations.

LUNA's completely unsustainable 100%+ debt ratio failed and then they thought they could stop the death spiral by dumping BTC into a market that was already dumping from the macro.

But you’ve always just gotta remember that in a free market, price will always do what price is going to do.

If a project has sustainable tokenomics or fills a need, then price will stabalise.

If a project doesn’t, then it die.

This is not just crypto, this is simply how markets and business works.

And worry about the long term sustainability, tokenomics and decentralisation of the projects you’re invested in.

But something I have noticed is that the narrative is still way behind where it should be.

So, price is crashing because the Terra model of running at a totally unsustainable 100%+ debt ratio failed when the markets started going backwards.

But if the network that the code is running on top of can be compromised, then it doesn’t matter how the thing works.

It will be compromised and ultimately fail in the end.

So the narrative is now that we’re all waiting for Terra’s fearless leader Do Kwon to climb down from his ivory tower and fix this great decentralised, algorithmic stablecoin.

But why are there no questions being asked about the risks associated with a network set up in a way where a founder’s pre-mine and early VC allocation affects governance in a way that ultimately affords him total control.

Nobody in the greater crypto media is talking about how pre-mines and VC allocations affect network governance.

When in the long run, this is all that matters.

This time it was just a simple failure in the tokenomics of the system.

Under the right market conditions, the thing collapsed.

All that matters is that they could happen, did happen and the economics of LUNA/UST didn't hold up.

That's new tech - Such is life - Learn and do better next time.

But even if and when LUNA get their economics right, the entire Terra network underneath has a single point of failure in those pre-mined coins allocated to Do Kwon and his insider VC buddies.

It doesn’t matter if you trust him now.

The risk will always be there and it will be compromised in the end.

In its current form, the Terra network is not secure and never will be.

I can’t stress enough that without a secure, decentralised, battle-tested network underneath, which Terra doesn’t have, the economics of the LUNA/UST relationship is a completely mute point.

So what can crypto learn from Hive?

I actually found myself down this path after reading a question asked here on LeoFinance.

What can Hive learn from Terra, you ask?

Now, Terra may also use DPoS for governance.

But when you consider Do Kwon's unknown pre-mine and whatever other VCs/insiders were gifted, it is not the same as Hive.

Token distribution is the key to DPoS governance and having that pre-mine makes this system of governance completely obsolete.

I mean look at STEEM.

It is a DPoS blockchain too.

But Justin Sun acquired the majority of coins required to install his own validators and therefore take full control of the chain.

At this point, it may as well be a database running on his own server at home.

It would certainly be cheaper and more efficient.

Once again my point is that if this can happen on Terra, then it is not secure and thus completely useless.

This time it was just the LUNA/UST algo that failed.

But just like what happened to STEEM and what will happen to every other DPoS coin in existence, they will face governance issues down the track relating to the founder/insider’s influence over the network itself.

So as I wrap up, what Hive can learn from Terra isn’t the question that needs to be asked here.

The question should instead be what can crypto in general learn from Hive?