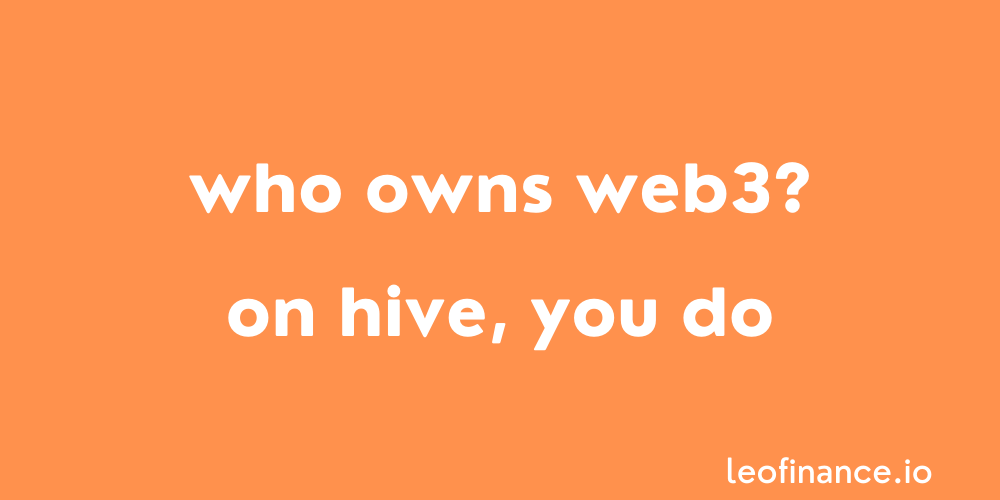 It's time Hive joined these mainstream discussions about Web3.

Did you see today’s freebie email from our old friend Pomp, asking the question who owns Web3?

In order to answer the question, Pomp looked at the token supply breakdown of some of the various blockchains that consider themselves to be a part of the shift to Web3.

I mean check out the following series of pretty pie charts: 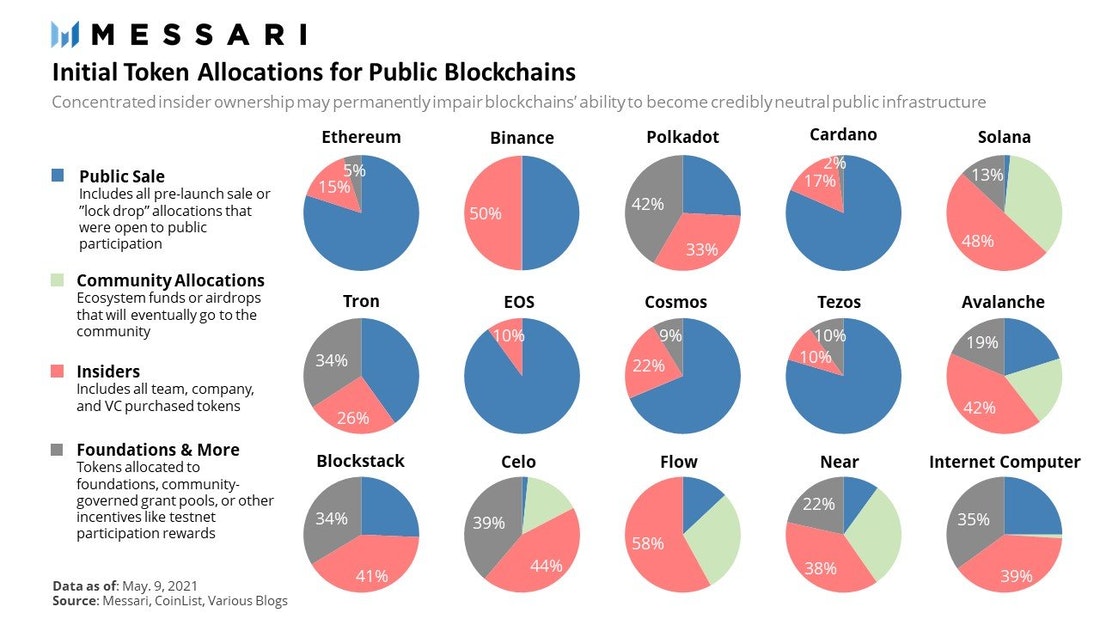 So to answer who owns Web3, we have compiled a list of founder launched, VC-backed cryptocurrencies?

All with various degrees of pre-mined coins that ensure control is maintained?

Just for a second, stop and think about what you want to get out of connecting your Web3 account to a decentralised application (dApp).

Achieving each of these pillars of Web3 at the account level is only made possible by a strong, decentralised network that keeps ticking over.

But with controlling founders and pre-mined stake allocated to VCs and foundations (companies lol, come on), a Web3 account running on all of Pomp’s chosen networks fall short.

You just cannot guarantee any of the above if the network at its base level can be compromised by founders and VCs with a controlling stake.

Now I understand that guys like Pomp have a vested interest in the status quo, but the writing is on the wall.

And the future is going to see all of these communities fork out their founding corporate overlords and controlling pre-mined stakes allocated to VCs.

Just like we saw when Justin Sun bought a controlling stake in the Steem blockchain.

The community, where the value was, simply forked out the pre-mine and went on their merry way as Hive.

Justin Sun now finds himself as the proud owner of a controlling stake in the premier ghost chain used by spammers.

So hey Pomp, now do a Hive pie chart: 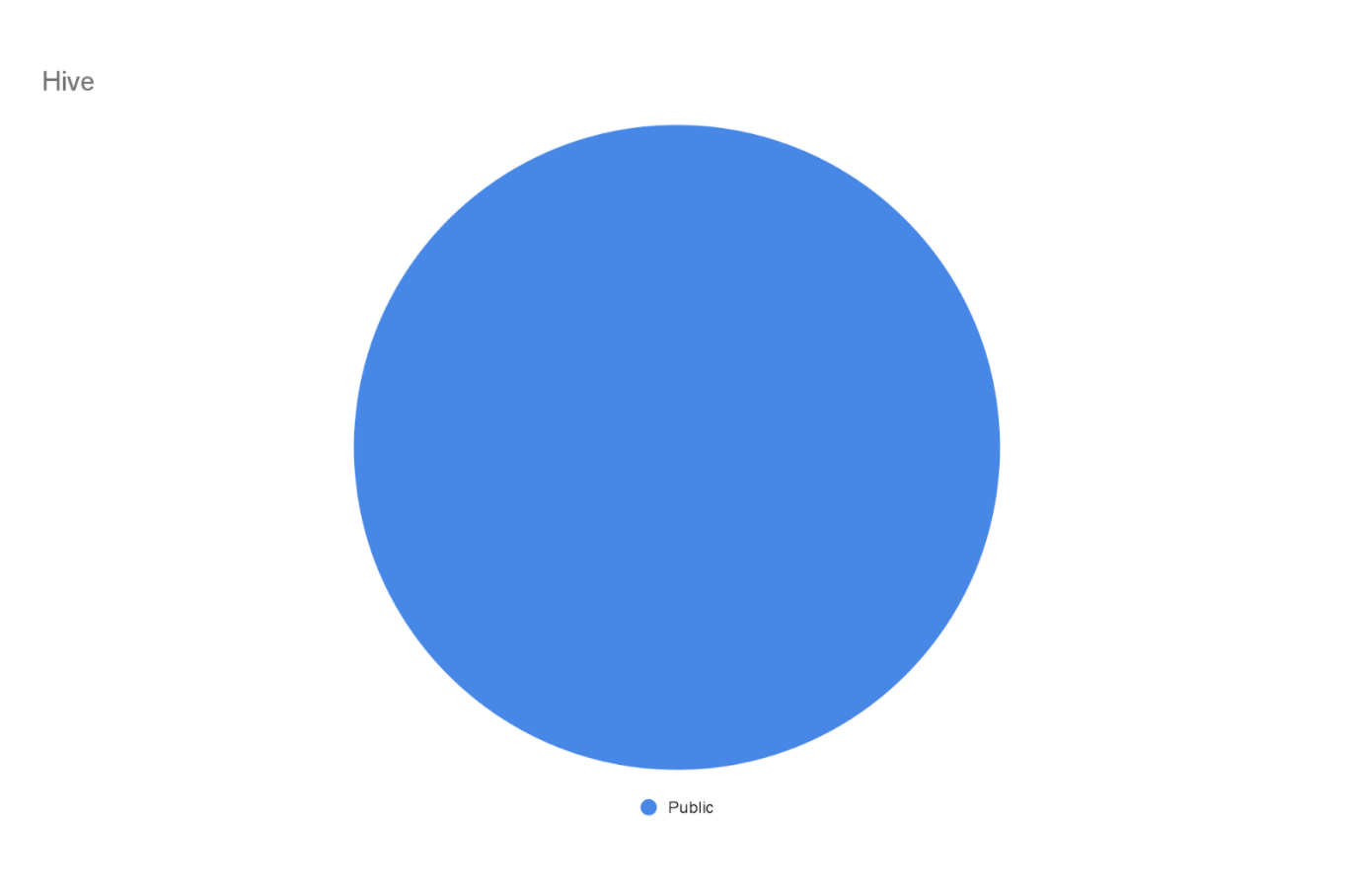 That’s right, now Hive is a blockchain with no founders, no VCs and no pre-mines.

Just an engaged, globally decentralised community of holders, where no single entity holds more than 5% of the total supply and a healthy inflation distribution method via the daily rewards pool.

Go a step further and under the Hive Blockchain’s Delegated Proof of Stake (DPoS) consensus, consider what would happen to the price of HIVE if a new takeover attempt was made.

The amount of collusion required, not to mention the number of coins that would be needed to be bought off the market to pull it off, would see the price skyrocket.

With the risk to the attacker being that they spend these astronomical sums to acquire the required HIVE tokens off the market, only for the community to fork anyway.

These are the network conditions that allow Web3 account ownership, immutability and censorship resistance to thrive.

As we’ve talked about above, the pillars of a Web3 account are all found at the base level of the underlying blockchain.

But dApps all need to have a somewhat centrally hosted portal that you can access your account via.

So on a Web3 Hive account, all of your data and followers sit on the base layer of the Hive network.

As we spoke about above, this ensures ownership, immutability and censorship resistance at all times.

It’s your account and if you have the keys, then nobody can take it or what you say on it, away from you.

But built on top of Hive are the centrally hosted dApps that choose to read the blockchain’s data in whichever way they see fit.

For example, social media dApps such as LeoFinance, the one I’m connected to in order publish this blog you’re reading right now.

Of course, LeoFinance is a centrally hosted application that has both laws and community enforced rules that it must abide by in order to remain.

As the finance and investing community on Hive, if I was to spam the community with sports content for example, then I can find myself muted by the front end.

Thanks to the Hive blockchain, it’s all still there at the base layer and I’m free to either find another front-end that tolerates my shit, or simply build my own.

So while there’s a lot of talk about who owns Web3 elsewhere, it’s all just theory.

On Hive however, owning your Web3 account and using it to interact with numerous dApps, is a working reality.

There is a thriving Web3 ecosystem being built on Hive

It's time hive.io joined these mainstream discussions about Web3.

There is actually already a working ecosystem of social front-ends, games and the like that you can connect your Web3 Hive account to.

All with the ability to earn your share of HIVE and various layer-2 rewards from your activity.

If you want to leave behind the world of founder launched, VC-backed cryptocurrencies before the penny drops on the rest of the industry then get your immutable Web3 Hive account.

LeoFinance actually allows you to use your Web2 account to onboard into a true Web3 ecosystem.

I love the pie chart, looking all blue and round, I can't seem to find a section with a separate cooler, oh wait, there's public written here, does that mean...

Of course, that's Decentralization, every token off for public accumulation...

I love this haha.

This makes my heart sing.

Great summary on the pie chart and I love the post

A pretty striking chart, isn't it ;)

I am kind of surprised the other blockchains all have at least 10% insider held. I wonder if EOS kicked out Block One because it was only 10%.

Hive is completely unique in this way.

It deserves to be a part of all Web3 discussions.

Thank you for stopping by mate.

I had a feeling that the allocations would look something like that but it's interesting to look at the actual data.

I'm with you. Hive is paving the way for the real Web3

Hive already has a working Web3 ecosystem of social and gaming dApps.

I just don't get why it is never a part of these conversations.

Well, there is the Decentralized Hive Fund... Maybe the pie chart shouldn't be 100%, but still we are highly decentralized as stake holders.

I may have taken a little creative license here ;)

NICE BACK LINK HERE FROM YOUR OTHER ARTICLE.
NOTE TO SELF, BACKLINKS ARE MORE THEN LISTS OF OTHER ARTICLES BY SAME AUTHOR LISTED AT THE END OF A POST.
NICELY DONE.