Why are you risking your business? - Get a Web3 Hive account today 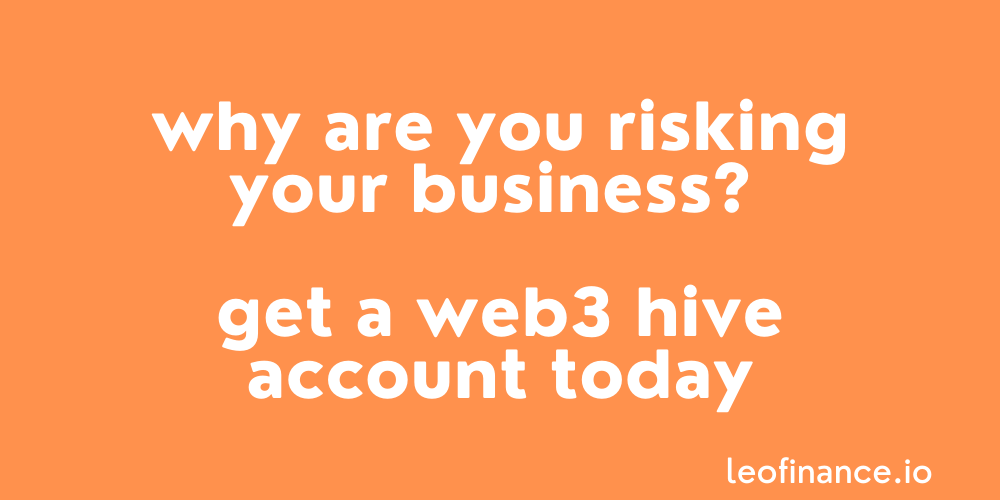 Today we saw YouTube remove Joe Rogan's latest interview with some whackjob, from its video-sharing platform.

Now, I can hear you saying “oh I’m not a whackjob though, I’m just trying to run a business so I’m sure Youtube or Facebook has no interest in touching me.”

But is probably what you want to base your business on?

I’d certainly lean toward the nos on this one.

Let me just preface by saying I don’t give a fuck about your politics.

You see, the problem isn’t with what’s being censored, but simply that a corporate entity has the ability to censor you at all.

If you’re running any sort of business online and are spending time and money on building your audience, then why would you do it on a platform that has a track record of deleting accounts?

The reason they delete them doesn’t matter.

What does matter is that you’re putting your ability to earn an income at the mercy of a third party with their own profit-driven agendas.

Hive is the premier Web3 social solution for your business

As we move into the era of Web3 however, there is another way.

If you’re in the marketing game and currently focus on building your email list, then you obviously understand the benefits of owning direct access to your audience.

But thanks to the Hive blockchain, those same concepts that you apply to email, can now also be applied to your social media game.

Welcome to the Hive Blockchain!

Hive is a social blockchain with a primary use case of allowing immutable on-chain social media-esque activities.

All on an immutable account that you always retain full ownership of.

You see, your account featuring all of your data and followers sits on the base layer of the decentralised Hive network.

While everything published here remains immutable thanks to the power of the blockchain, the network uses a series of different front-ends to display this data.

For example right now I’m blogging via the LeoFinance front-end at leofinance.io.

It’s completely up to the LeoFinance community to display the content found on the Hive blockchain however they please.

If you don’t agree with the rules of that particular front-end community, then simply move to another that displays the data more to your liking.

Thanks to the Hive blockchain, nobody can delete your content and you won’t ever lose your audience or ability to generate an income from them, as both are tied to your account at the base layer.

You don’t have to stop using Web2 social media, but it is a prudent business decision to use these centralised legacy platforms more as an onboarding tool for your Web3 presence.

So, if you have a business that is heavily reliant on your ability to market to an audience via web2 platforms like YouTube or Facebook, start using it to onboard your audience to your Web3 Hive account.

Such a simple change that has the power to safeguard your business into 2022 and beyond.

Yeah this year I think attention will be fully on web 3.0

And you're a part of the revolution right here on Hive.

"You see, the problem isn’t with what’s being censored, but simply that a corporate entity has the ability to censor you at all."

A HIVE account is insurance against deplatforming. Stick it to the legacy platform censors!

And the thing is that you don't have to and shouldn't just stop using your web2 social media accounts.

Instead, think of them simply as front-ends to Hive haha.

That way, if they deplatform you over there, then you and your business doesn't skip a beat.

I really think that LeoFinance's upcoming Project Blank is going to show how easy this can be done.

Automating the practice of linking your Twitter to the Hive blockchain and having the ability to keep Tweeting, while retaining ownership of your account/followers on the Hive side.