Would your business survive being banned from social media? 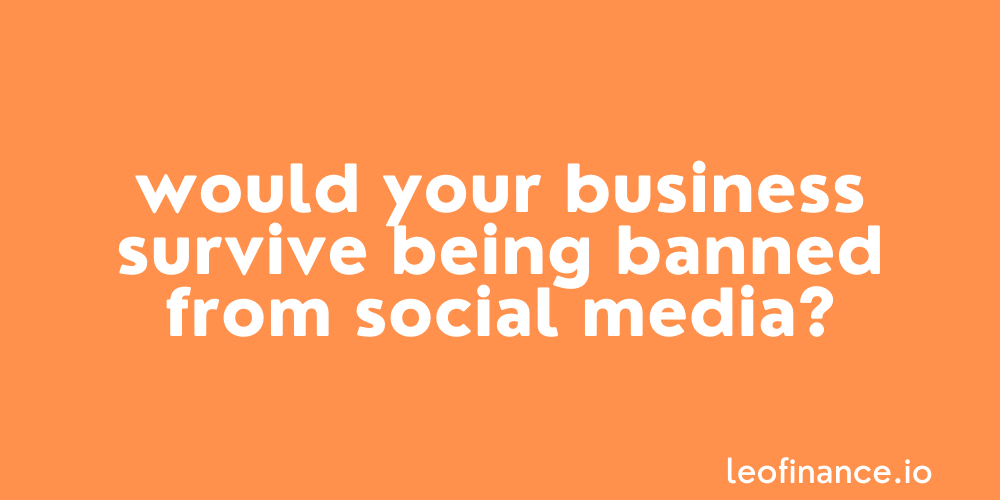 Losing all of your followers and ability to pitch your offer to them would no doubt be catastrophic.

Today we saw yet another high profile business in the crypto space banned from YouTube.

Bitcoin Magazine was in the middle of a live stream when YouTube pressed the button and unceremoniously banned them.

“...content that encourages illegal activities or encourages users to violate YouTube’s guidelines is not allowed on YouTube,...”

We’re sure it’s nothing to do with YouTube being the biggest centralised, Web2 video platform with an obvious economic incentive to keep things this way.

Don’t you think that as the biggest, centralised Web2 social platform, YouTube has an obvious economic incentive to keep things as they are?

Anyway, that argument has been made 1000 times and now the decentralisation cat is out of the bag, it’s only a matter of time.

Why do crypto content creators refuse to use Web3 platforms?

But come on, I'm going to deviate and be straight here.

It’s actually embarrassing how genuinely outraged Bitcoin Magazine was that YouTube would have THE AUDACITY to completely remove their ability to make money from their followers. 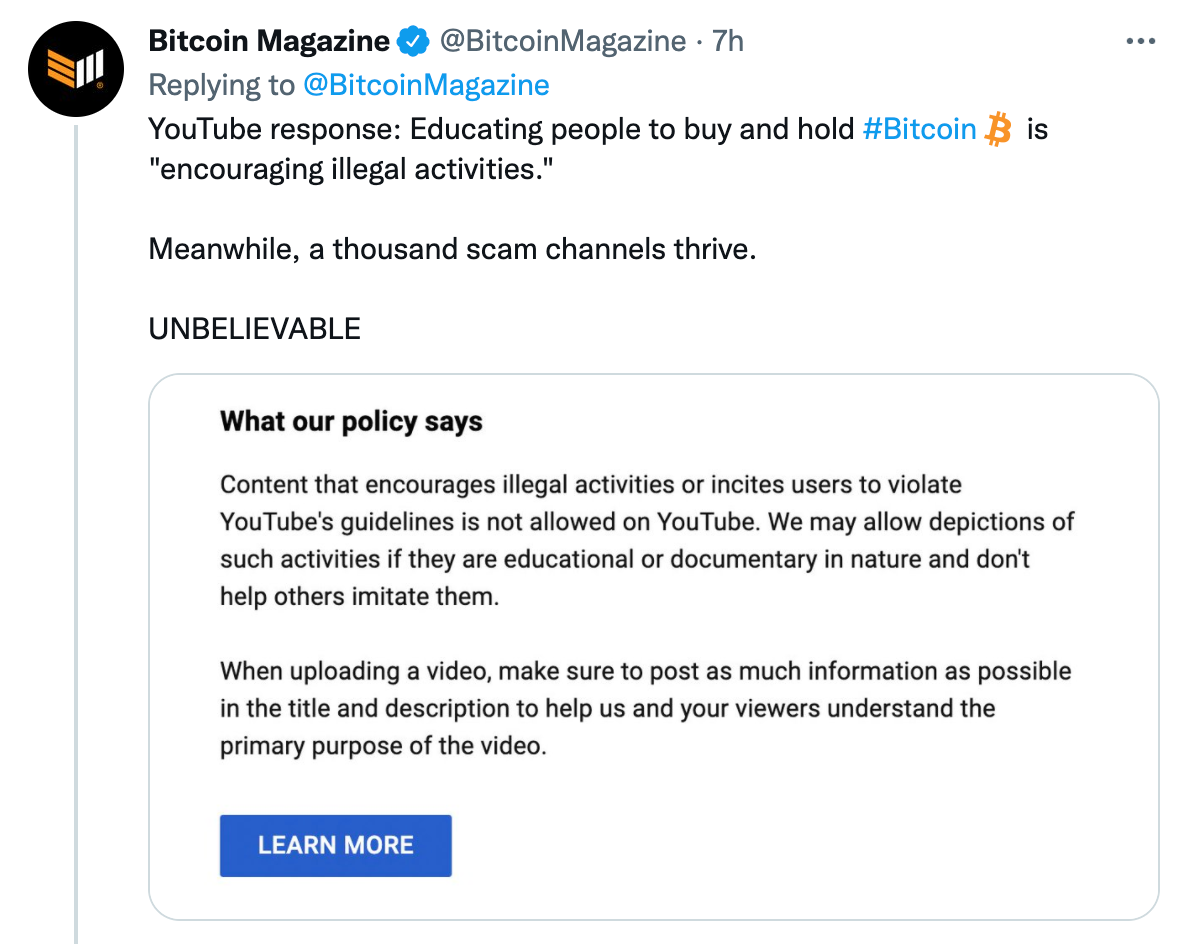 Haha, orrite lads, calm down will ya.

Honestly, how can you even be mad at YouTube for banning creators who are literally using their own platform to talk about the tech that will ultimately consume them?

I mean they literally talk about the potential for censorship to occur on Web2 on a daily basis.

When crypto content creators not only continue to exclusively use Web2 platforms like YouTube, but actually get upset when the centralised platform takes away their ability to do business, it’s laughable.

But that's an argument for another day.

Back to the Bitcoin Magazine banning saga

Getting back on track, Bitcoin Magazine was luckily bailed out by the powers that be, over at YouTube HQ.

Just like Pomp was able to do not so long ago, Bitcoin Magazine is big enough to get the attention of YouTube, therefore getting their data and most importantly their 56.8K subscribers, back.

Fast forward a few hours and we can now see that the Bitcoin Magazine YouTube account is already back up and on their merry way selling to their 56.8K followers.

YouTube nonchalantly blame what they call a temporary ban due to their automated system flagging the account and Bitcoin Magazine forgives and forgets.

That’s all good and well if you have 56.8K subscribers on YouTube and a 1.9M strong Twitter following.

But what if you’re a relatively modest small business or entrepreneur?

What if your business was banned from social media today?

How would losing access to even 10K subscribers affect your ability to pitch your offer?

I laughed at a company that literally promotes decentralised tech calling censorship from a Web2 social media company as unbelievable, but it most certainly wouldn’t be a laugh for you.

Losing all of your data and followers simply because someone at a tech company decided that they didn’t like you today, would be more than unbelievable.

It would be thoroughly catastrophic for your business.

Even if it was a temporary ban due to their automated system flagging your account like we saw as the explanation given above.

You don’t have the social clout to get their attention and plead your case.

Nope, you just lose your entire list of leads and ability to conduct business along with it.

Surely the risk to your business is simply too high?

The answer here is obviously a resounding yes.

Well, did you know that there is already a battle proven blockchain offering you an immutable, censorship-resistant account?

A Hive Blockchain account removes all risk of a centralised tech company taking away your ability to conduct business online, with your data and followers always tied to your account at the network’s base layer.

With that single Hive account, you can then connect to a thriving ecosystem of Web3 dApps such as social media and video sharing front-ends.

If their community rules mean that the content you’re sharing does not align, then it’s okay.

You simply take your data and followers with you by connecting to another front-end where your values better align.

This is the power of Web3 and the Hive Blockchain.

Your customers are there, there’s no denying that fact.

But if Facebook rebranding to Meta and deciding to focus on building their own closed version of a Web3 ecosystem doesn’t show you that the writing is on the wall for Web2 social media, then I don’t know what will.

Cross post your content from Hive back to those platforms, essentially viewing them as Hive front-ends that help you onboard your following to your immutable, censorship-resistant Web3 account.

If you’re ever banned or that platform simply decides they don’t want to run a social platform anymore and deleted your account, you’d already have built a viable alternative on Hive.

Protect your business by creating a Web3 Hive account today

Make the right choice for your business and get an immutable Web3 Hive account today.

LeoFinance makes it super simple to onboard into Hive’s Web3 ecosystem by offering you the ability to use your Web2 Twitter account when signing up.