Not signed up for splinterlands yet? Make sure to use this link and sign up! 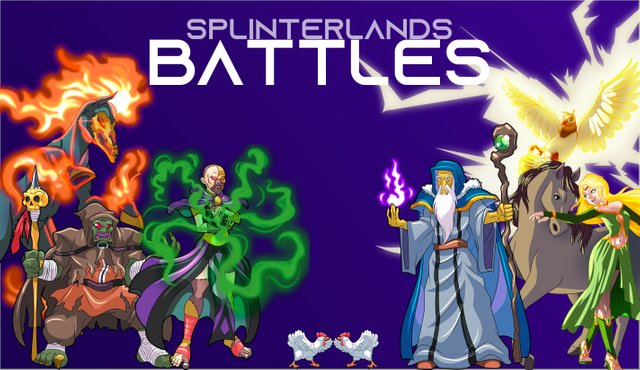 In this series I want to showcase certain battles where you can learn from mistakes or from successful moves.

In today's learn by example I don't have 1, but 2 battles for you. It just so happened that I battled 2 games in a row that explained the same principle.

When facing battle where there is a damage condition (earthquake and/or noxious fumes) in combination with low mana, there are a couple of things that you can do. As always, it depends on the splinter, your cards etc. If you have a card like "the forgotten one" that's a great one to use in a low mana noxious fumes battles for example.

However, not all of use have all the cards and all splinters have a solid alternative. Therefore, we sometimes have to come up with another strategy.

The first example is a 26 mana game. This isn't really low mana anymore, but the same principles also work in low to mid mana games, like this one. Also, this fight showcased the brand new card Uriel the purifier, so I had to include it.

A sidenote: at 25+ mana battles I like cards like almo cambio aswell. However, at lower mana fights he will often end up in a hopeless 1v1 vs a monster with heal. 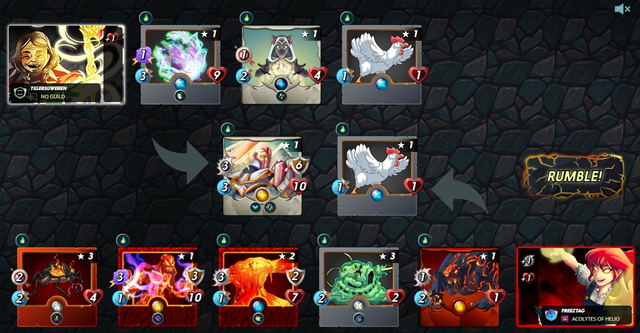 Link to the battle

As you can see, I start the lineup with a chicken, an ooze and a fiend. In combination with the health buff from Tarsa, this results in a pretty big meatshield for the enemy to get through. This way we want to keep our backline monsters as healthy as possible while we deal damage at the same time. Even if this means that our living lava is idle for one turn, that's fine.

Our backline monsters need to have decent health (5 or above is usually a good minimum) and we want a maximum of 1 idle monster. Remember, Tarsa buffs the fire beetle to 5 health, which means that he can survive 2 rounds of noxious fumes.

Also, this strategy can be countered by a heavy sneak lineup. However, most sneak monsters don't have that much health and are not that strong in damage conditions. Therefore, I wouldn't worry about it too much. At least not at the lower leagues.

This next game is actually a more pure example of this strategy. Our frontline consists of a chicken, an agent, an ooze and Epona. Once again the purpose of all these cards is to delay the enemy as long as possible so that they take as much damage as possible from both the earthquake and regal peryton.

By the time that we start round 2, the power of the strategy becomes clear and we can see that the game is pretty much won at that point.

The enemy had the right idea by also using a chicken and an ooze as first and second position monsters, but doesn't optimize the strategy. Also, using a magic flying monster easily outperforms his backline in this situation.

What Is SBT?
SBT is short for splinterlands battle tokens.
It's a token that is made to reward people who had an awesome splinterland battle!

If you wanna know more about SBT Check out this post by the creator of the token. It explains all the uses for it and milestones to come. Link to the post here: SBT Milestones You May Have Missed.

Credit to @itzninjafool for coming up with this idea and sponsoring many of us to give it out and spread it around to the community.

Rules
Only participants can claim rewards (both loser and winner - it takes 2 players to create an awesome battle). However, only if you have not yet received an SBT reward. For example, if this is a battle that you submitted for an SBT Giveaway challenge and you have already been rewarded you will not be eligible.

If you are eligible to earn the SBT reward, simply comment on this post and I will send you 2500 SBT.