It's not too late to invest into Splinterlands 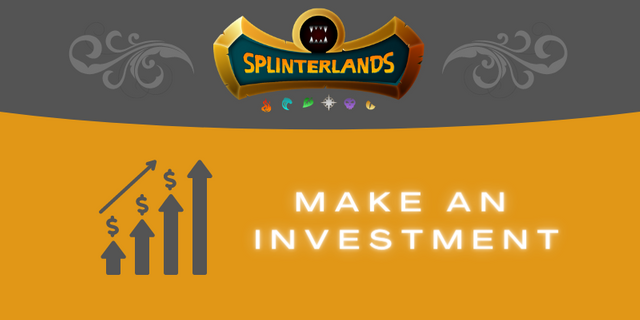 Every day thousands of new players are coming into the game. On the one hand, many of them have done their research and set their goals. While on the other hand, others are wondering if they haven't missed the right time to invest.

It's true - if you'd have invested some money a couple of months ago, you'd see at least 3x gains today, if not more.

That applies to me as I joined ~3 months ago, and now I see ~4.5x returns from my investment.

That might drop a bit after the Chaos Legion goes live, but still, I expect to see sizable returns, especially in the long term.

Of course, older investors see even greater returns for their money.

But what about the new players?

My short answer is - No, you haven't missed it. There are still great opportunities here.

It's a card game, and players naturally set their sights on this asset, although it's a bit tricky here.

During the last few months, card prices from the older sets have gone up tremendously. Because of that, for most players, they are unattainable unless they drop some serious cash into the game.

It's also unclear how their price will look once the cards from Chaos Legion packs hit the market.

There will be fluctuations, but it will depend on how the new cards stack up against the older ones.

What should you get?

If you're looking at investment opportunities, look at the new reward cards and invest there. There are still many cards left to be printed (~14% done).

Once they go out, I expect the price to rise higher. That's why I'm stacking them up one by one.

The only problem right now is the summoners. They are relatively few in numbers if we compare them with the current player base. And that has pushed their price to new heights.

Because of that, even a level 2 rare summoner can cost ~100$+ and way more for higher levels. And that's just for one splinter.

If you have lots of money, you can go for it. But if you can't afford that, then wait until December 8th. That's the date when the new card packs will be opened.

That will flood the market with lots of new cards, including summoners which we're heavily lacking.

Strongly consider investing in this asset. It's not financial advice, but I see a bright future for it.

Currently, it's trading for ~0.43$. But, during October, it already touched the 1$ mark. And I believe it will go way beyond it.

But for that, more use cases need to be introduced. We already saw how the introduction of vouchers affected the price. And I'm eagerly waiting for more. 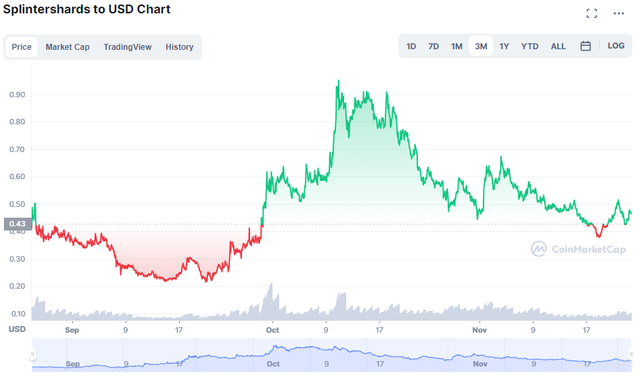 If you're thinking about getting some, then the current price dip could be a great entry point to build a sizable stack of SPS and reap the rewards later.

Plus, the dev team already hinted that to get the best things in the game, you'll want to hold SPS.

That's why I'm not giving up a single piece of SPS I get.

Getting a piece of land is a bit of a gamble but could be worthwhile if you get lucky.

Well, a single piece currently sells for ~700$, but you don't know what you'll get. It could be a common plot, but at the same time, it could be a legendary one.

The price has also increased several times over since the initial sale. But right now, it's just speculation. If these will be the only land plots in existence, then even the current price could be a steal. But if there will be additional land releases in the future, then you could be overpaying for it right now.

On top of that, we don't know yet how the land will work and how the players will be able to mint new items from it.

For me personally, the price is a bit too much but make your own decission.

As you can see, then there are multiple ways how you can profit from your investment. You just have to take action.

I'm already making 10$+ per day from SPS airdrops and daily battles. If I get lucky with quest rewards or SPS increases, then the income is even higher.

Want to give this game a try? Then join using this link.

Yay! 🤗
Your content has been boosted with Ecency Points, by @garzug.
Use Ecency daily to boost your growth on platform!

Your post has been manually curated by @monster-curator Team!

Congratulations @garzug! You have completed the following achievement on the Hive blockchain and have been rewarded with new badge(s):