It's been a weird couple days for me mentally. As I've talked about before, my partner and I are separated by border closures due to COVID. Chile re-assesses their situation monthly, and despite our wishful thinking, they recently announced that there will be no entering/exiting the country for the month of May. Furthermore, they have relaxed on their curfew restrictions, so numbers will certainly rise which gives us little hope for June, as well.

I don't mean to complain but this shit sucks. The realization that I need to try to live off of random jobs on Front Porch Forum until I can get to my job in Chile is really starting to set in. I'm not sure what I'm going to do. I'm doing ok for now, but I'm one straw away from breaking that camel's back that is financial "security" and pushing me back towards my homeless days. I'm more or less stuck. My rent is pretty high, but with the housing market around here, there's no chance of moving, and I have to stay put, and figure this out one way or another.

Furthermore the separation from my partner and the ambiguity of the end of said separation is really starting to take a toll on my mental state again. It's hard for me to enjoy much right now. I'm mostly alone and with any activity I do; that is looming over the rest of my thoughts and inhibiting my enjoyment.

It's made it difficult to do just about anything. I try to paint and I destroy the painting. I try to write but I find my personality and motivation lacking. We're in the middle of a seemingly endless weird weather pattern that prevents the ground drying enough for me to skate or bike or do anything of that nature. I try to read and learn and educate myself on the blockchain but find my mind straying. I can barely even hold my attention on here; something I normally FULLY enjoy. I'm having car troubles again but have been unable to address them due to multiple interferences and uncertainties.

BUT, there's always some sort of light at the en.... 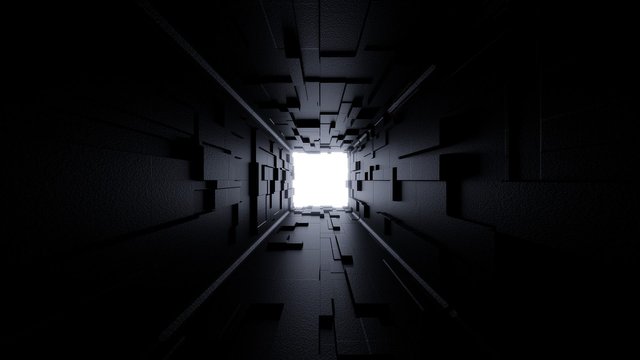 Yeah we all know the phrase. Some pretty cool developments have come up recently. Among other things, something I'm really excited about is the retrieval of my old Steem wallet/account thanks to some encouragement from @ervin-lemark .

Awhile back, a crazy fucking landlord stole all my shit and when giving it back, decided to either hide or take my passkeys. I've always been hoping for "hide"; because my accounts were never touched and I doubt they would have ANY idea what the book was if they had looked at it. They aren't exactly genuises...

So I've been hanging onto the hope that they just threw it somewhere random with the remainder of my things. Things that are currently in storage an hour from me, and it's been a super slow process trying to fit what I can in my small car, bring it home over the mountain pass, and sort through it. So, there's hope they still exist.

ANYWAYS, yeah, during a conversation about Splinterlands Ervin mentioned something about recovery accounts. I was well aware I didn't have one, but then he mentioned something else about only needing a single one of your keys to retrieve the rest. I thought, hey, maybe there is a document somewhere on my old computer. There wasn't; but after digging around I checked out the saved passwords on one of my browsers and, lo and behold, I GOT IT!!!

It isn't much to many but for me, that was a huge deal. 300 or so STEEM is a good amount of money for a wallet like mine. I've explored modern-day Steemit enough to know I'd rather have those assets than continue to use the platform- at least much. So, I started a power down. When it completes, my next step will be figuring out what to do with it- which will be determined by my financial situation at that time. 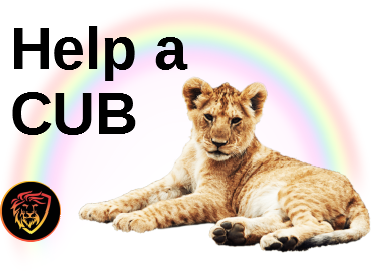 Speaking of my old computer, I decided I was going to clean it up and donate it to a really cool contest @lbi-token is hosting. This contest is to help those on the platform that do not have consistent access to a personal computer. Users may make an entry to explain there reasons for needing one, and through donations they have raised $500 to go towards a new computer for the winner. You can read more about it and see some entries in this post here.

I initially stumbled across on entry on leofinance.io and went to the contest posting from there. This was around the same time I had dug up my old Acer computer and it was sitting there, staring at me. After reading the post, I decided to offer up my Acer as a consolation prize. (I said constellation originally, if you want to make fun of me) I do not need it necessarily, and while it is a good back-up thing for me to own, me holding onto something I don't use doesn't really reflect my values NOR the possibilities that made me fall in love with platforms like this to begin with. I constantly rant and rave about how helpful things like HIVE or crypto/blockchain in general can be for people in financially-struggling countries; and I decided to live up to my values and offer up my old computer to the runner up.

If you have the time, I would urge you to go to the above linked post, read the entries, and cast a vote once the voting has begun. This is an amazing contest and I doubt I'm alone in this being the exact type of thing that brought us here in the first place. 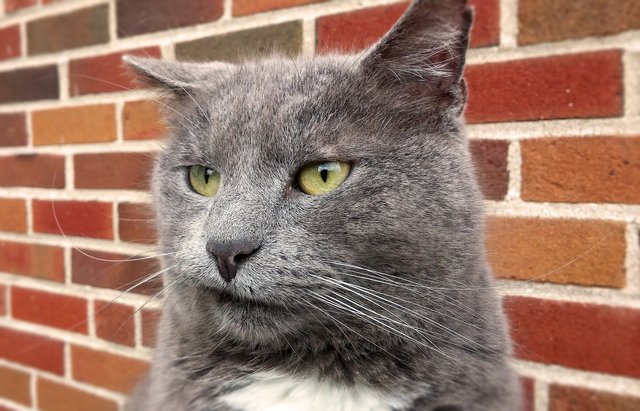 OK, so backpedaling a little bit. Back to retrieving my Steem account. I was not around for the hardfork and I didn't realize that my old Steem account had also produced an account and wallet here on the HIVE blockchain. Holy shit!! All of a sudden, Ervin had encouraged me to retrieve, STEEM, SBD, HIVE, AND HBD. Not to mention Splinterlands cards, and he even mentioned Blurt which I have heard of but know little about. I apparently have an account there but currently can't log in; thinking it has something to do with the network because he also had this problem.

Now, I had a hard time deciding whether to continue with this account or go back to my old account, where I had less HP but had made more connections. However, I really value the connections I've made here and I hadn't been active with that account in several years. It didn't take a lot of thought to choose this account. And after making a post on the old one to see who was still on the platform and receiving 0 responses from my 900-something followers; well, I knew my suspicions of that group either dying out or not remembering me were confirmed. So, I quickly transferred over my liquid HIVE and HBD to this account. Next, I decided to delegate my HP from there, to here..

Now, THIS is where my questions start. I'm hoping someone can help me understand some annoying and uninformed questions hahaha:

OK, so, I've never really looked into delegations. I haven't really received any nor given them out. That was always a future thing in my head; my vote needed to be worth something before I started thinking of that. And, with the delegation, it finally was! I got to a .03 vote value. Now, my votes actually produce payouts-- so I finally feel like my votes do something!

So, I tried to delegate all of my HP from my original @herbertholmes account, but I didn't have enough mana. So, I delegated 250 HP instead. This morning, I went to see if I had enough recharge to delegate the rest. I was able to delegate another 47 HP over here. 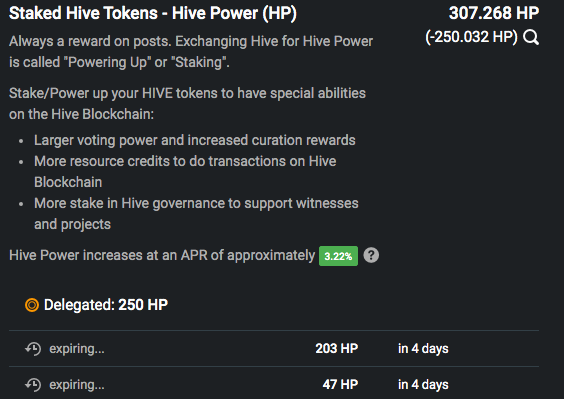 What's going on here? If you are already delegating to an account and want to delegate more, do you need to first undo your original delegation? It's also really curious to me that that original delegation is now split into two parts, one aligning with the value of 47. I un-delegated the new 47, which went immediately back into my wallet, rather than be in this "expiring" state. Can someone please explain this to me? I have a lot to learn still..

AND another stupid question 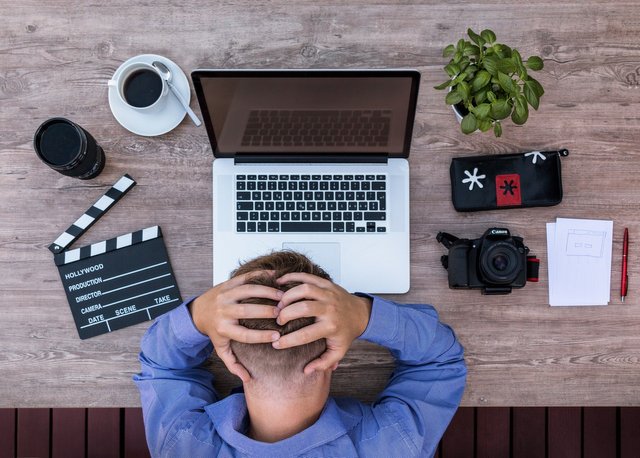 Ok, so this is more a misunderstanding of how the coins that are associated with the HIVE blockchain work in terms of staking.

Recently I decided to stake more of the platform-specific coins so that I can have more voting power on these other sites. But, I'd like to know how this works cross-platform in the ecosystem. Forgive me for my ignorance on these accounts; I'm aware there are probably many articles that explain how this works. But, as I'm sure we all know, unless you know the exact terminology of what to search, searching for general posts can be extremely difficult.

So, let's say I have 1000 Leo power(or LOTUS power; or POB power; or Cine power...). If I am using the Peakd interface, and I come across a post under the Leo tag/community; will my vote on Peakd reflect my LP? Or, would I need to go to the Leo platform for my LP to be implemented? In another circumstance, if I am on leofinance.io, and I vote for a post/comment, will that also reflect my HP?

Or, let's say it's a secondary tag. If someone has tagged Lotus, Leo, POB, and Cine(an unlikely combination, I know; I'm just using it as an example), will my vote generate all of those, influenced by my associated holding power on each coin? I'm not sure how to phrase this, but I hope that I am being clear enough that you will know what I mean.. 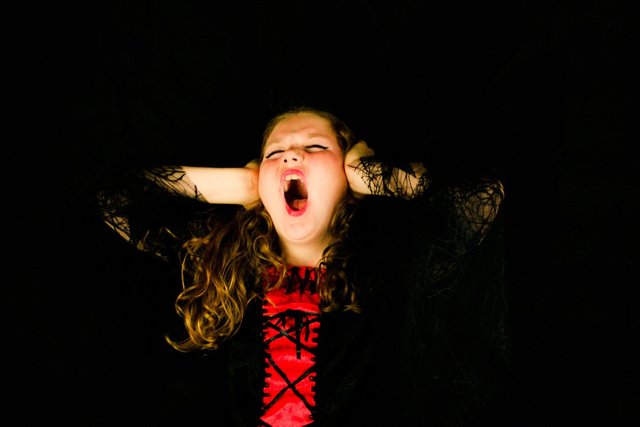 Ok, that was a lot of different topics in one post. It's been difficult for me to "be myself" following the border closure news. And that's made it difficult for me to write and interact the way that I'd like to on here. I'm hoping in the next few days my head starts to clear up and I begin to get back to my "normal" self. COVID has effected me in a very unique way across the board, and fortunately I'm at least managing to keep myself out of a serious bout of depression/mania/bipolarity/bla bla bla all the fun words doctors use with me.

I really hope anyone with the time will go and read those posts made by the CUB contest applicants. You have plenty of time; voting won't start until next week. And I hope someone can help clarify my novice questions concerning delegations/staking power and how all of this intertwines. If you know of an already existing post explaining these things; just go ahead and drop a link in the comments for me. I'd appreciate it greatly as I'm striking out with the search engine.

In the meantime, it's fucking pouring here, so I'll go back to watching Castle Freak and try to get my brain back.

I hope everyone's doing well. Y'all amazing. Mad love to the HIVE <3