This is my first photography post on the HIVE blockchain!

I'd like to start by saying I, in no way, consider myself to be a legitimate photographer. It has been a passive hobby of mine my entire life. BUT, I do not claim to have an even novice knowledge of photography.

I have always been interested in the composition of photos. In high school, we were fortunate to have a dark room. I was lent a film camera(at this point in time, 10 years later, I cannot remember which camera it was) and had the pleasure of experimenting with developing the photos in said dark room.

I also had a friend who let me use his digital Nikon camera back then. I shot thousands of photos; but never really understood what I was doing fully. Since then, I have acquired a Nikon D40; but still have not really made any further effort to understand these cameras. I just keep fucking around with them until I do, or do not, get a shot I like.

Recently, I was discussing random things with a mechanic friend of mine who was looking over a car I had bought to get his opinion on the best way to give it a few more years. Somehow photography came up, as I knew he was a photographer previous to our friendship, and he said something about shooting Nikon. The fact I had a D40 collecting dust in the back of my closet came up and he revealed to me that despite having sold all his equipment for mechanic's tools; he still had a few, super old Nikon lenses kicking around and he would be glad to let me experiment with them.

It was exciting to have a reason to re-spark my interest in the camera. Perhaps because of my lack of true photography knowledge I had grown tired of the camera as I could never really get the shots I wanted with the stock lens.

I have been experimenting with the camera more since. Despite the lenses being the thing that forced me to take the camera back out, this photo was shot with the stock lens. I was playing around with a portrait lens at our local DIY skatepark when the sunset turned wild and I took off the portrait lens. After I snapped about 100 boring typical sunset photos, I decided to trying to shoot a silhouette of my room mate in the foreground.

I was pretty happy with the outcome. This is unedited. Again, zero real photography knowledge. I just like hitting the button. 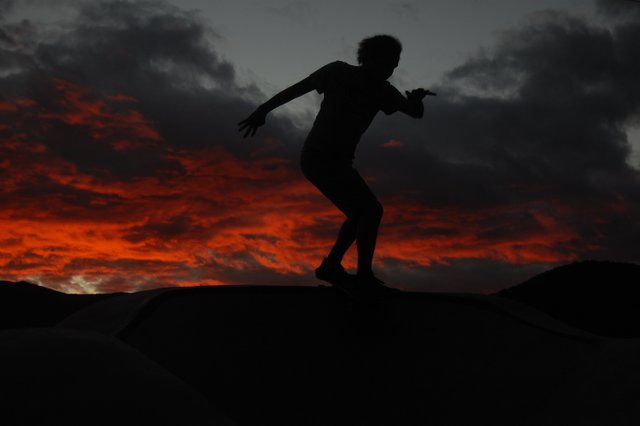 Thanks for reading my rant. I plan to post more recent experiments in the future; and also to use this platform to grow my knowledge of photography.