Evergreen Content Would Take LeoFinance To The Next Level! 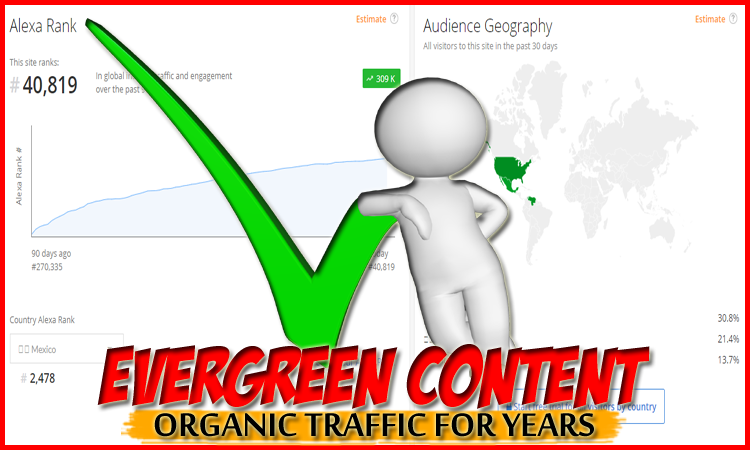 I have talked about marketing and the importance of optimization previously and one of my posts was even called 'The Best Post Ever On LeoFinance'. While that is an amazing achievement on its own, and obviously an honor to have one of my posts being "crowned as king", the reason for @cflclosers to mention that article is because he understands how vital SEO optimization is, and how organic traffic will be a total game changer for Hive and LeoFinance going forward.

It wasn't the best article ever written, it wasn't the highest rewarded article throughout the history of LeoFinance and the truth is, that the article didn't do much for LeoFinance at the moment I published it.. But that was not my intention. My goal was to optimize the article and to boost the organic traffic towards LeoFinance and Hive. That takes time though, and anyone with the slighest experience or knowledge about search engine optimization knows how good it is for us to optimize our content.

That was the purpose of my mini-series:

I want people to truly understand the importance of optimization and how each bit of content being published on LeoFinance or Hive can have massive impact on our overall results.

While you might care more about your personal results, especially during a bull run where we have green numbers literally everywhere, your content can do so much more for everyone than just acting like a piece of content that people will reward and forget about moments after they have read it. Your content can actually play a major role in the future, and it can literally be the deciding factor for people to either ignore or be part of LeoFinance and Hive. It can also bring tons of traffic towards Hive and LeoFinance for years, which is what everyone should be striving for.

However, as I have already talked about these things multiple times in the past, I will do something different this time. This time, I'll talk about evergreen content and what long-lasting content actually means and I will also explain what it is and give you some examples.

All content online is sustainable as the articles and blog posts doesn't disappear, but evergreen content is content that continues to be relevant long past its publication, so traffic grows over time. By optimizing evergreen content you'll have a superb chance of generating tons of organic traffic for years.

Evergreen content is not news, trends, statistics or numerical reports. So, even though the current bull run and the price of BTC is amazing to see, the posts being published that is about the new ATH with little to no additional information is not content that are likely to generate any traffic after it has been published. You might draw attention towards your content from on site traffic, which obviously will increase your chances of getting upvotes and being rewarded juicy tokens, but that content won't yield any results at all besides that.

Trends, news and statistics or numerical reports that are likely to change has an 'expiration date' and is mainly used to boost traffic and sales for a limited time. So even though quantity might be good in terms of ranking, as more articles gives you 'more chances' to rank on google, quality will rank better.

A well-optimized article ranks better than a poorly formatted article for instance. The actual content doesn't matter in that sense. Evergreen content that is well-optimized will yield great results over time though, for two reasons;

Remember what I said above: Trends, news and statistics or numerical reports that are likely to change has an 'expiration date' and is mainly used to boost traffic and sales for a limited time. This is not evergreen content and posts about how much tokens you have bought, posts about BTC reaching $40K or posts about how much you earned last month is not evergreen content that will generate traffic over time. Those posts are great for us today, but they are not likely to give us anything at all one or two weeks from now.

'How to lose weight' content for instance, is amazing evergreen content because it doesn’t matter if it's 2020 or 100 years from now. People will always want to lose weight and find new ways of doing it. US presidential elections are non-evergreen topics as the elections happen every four years.

If you write about BTC reaching a new ATH of $40K, that gives you an initial burst of traffic, but when BTC peaks at $41K, you need to write another post about it. That post will boost your traffic again, but it also puts you on the hamster wheel of content creation.

With evergreen content, you can work less and get organic traffic. Truth is, that you can't really work less as a content creator on Hive or LeoFinance, as you need to publish content for others to be able to reward you. However, evergreen content will give the entire platform greater results in the long haul, and that means that you can work less in the future, as the value of the token will increase due to all the traffic we get.

One could say that the ultimate question is: - Do you want to publish content for short term gains or for long-term profits? - But that question wouldn't be fair...

We need all types of content and articles, but if everyone would optimize and publish 1 evergreen article out of 5, which would be 20% of their articles, we would see crazy results in no time!