Grow Your Hive Audience | Give Your HIVE Content More Visibility 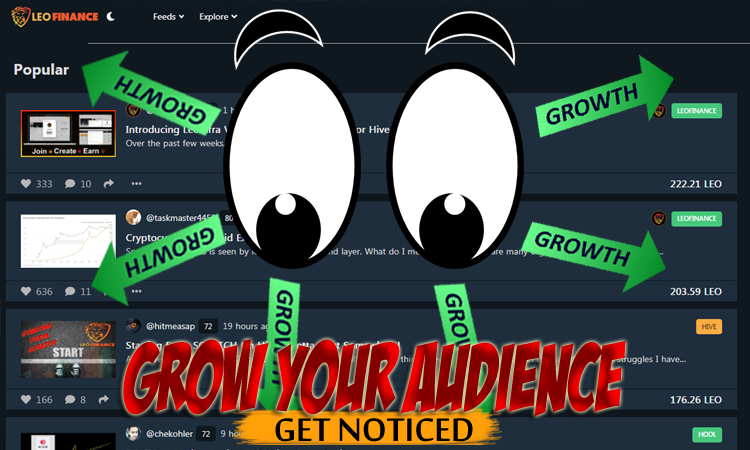 I guess that most of us, at some point, have wondered how some authors are (or have been) 'lucky' to earn massive rewards and how these authors frequently continues to pull in rewards others could only dream about. There are no magic tricks. The core foundation consist of hard work and effort, these authors climbed a hill as well as most others. The biggest difference is that they eventually reached the top, with a bit of luck or not. At the top they made a snowball. They pushed that little snowball down the hill and it started to roll by itself. The more the snowball rolled, the faster it went, and it grew larger and larger.

The common analogy is with the rolling of a snowball down a snow-covered hillside. As it rolls the ball will pick up more snow, gaining more mass and surface area, and picking up even more snow and momentum as it rolls along.

Starting From Zero On LEO

I start from zero on Leofinance, but I am not new to Hive. I joined Steem in July 2016 and I've witnessed a great deal of things. In fact, I've witnessed almost everything that has happened during that time..

Like I stated in my previous post, I stopped having fun a long time ago and just recently decided to make a U-turn and do things differently. I needed to go a different route because I was going nowhere. I am going back to my roots again, when things were new, fun and captivating. That was when I enjoyed the things I did and I was glad to be a small part of this amazing adventure..

So, what is this big difference you might ask..?
It involves a lot of different things and it would be more or less impossible to cover all of it, so I won't. Instead, I will share some of the things, perhaps the most important parts of the story.

I Did Things Wrong.

Take into consideration that my entire time I've spent on Hive (Steem) is included here, and even though I didn't do things wrong from the start, many things still overlap and is included in what I'm about to tell you. It will be a bit messy, because I can't and won't share exact dates or anything like that either..

Anyhow, for someone who was new to crypto- and blockchain when I first arrived, I got totally hooked because I saw the rewards. I definitely joined because of the rewards, but I stayed for everything else.

How a former freelancer who turned his extra freelancing work into a full time brand building business 'forgot' and lost track of himself, is probably a story of its own.. But to be a full time freelancer, working with- and for hundreds, if not thousands of clients from all over the world, and having dozens of co-workers over the years while building that business from the comfort of my home. Well, I knew things and I was good at the things I did.

It didn't take long before I started to share content and rather quickly, I started to grow both my audience and my profile. Rewards started to come my way and I tried to be as consistent as possible. I was eager to put out content frequently as it gave me a larger chance of getting some votes.

My thoughts were that more content where equal to a higher chance of getting votes on something I published.

Doing these things while I was still eager to publish multiple articles per day was hard. The more "research" I did on these things, the harder everything became. Instead of enjoying my time, sharing things I wanted to share, I started to chase the rewards..

With more time, more anxiety, stress and misbeliefs, I somehow 'forgot' what I truly believe is, and should be, the most important ingredient on Hive. The social aspect.

I focused entirely on my own blog, on my own profile. I published content and I made sure to reply to any comment I got. I often gave each comment an upvote, not because I had enough stake to make a significant difference for someone. I did it more like a token of appreciation. While I thought it went great, and was the best thing to do.. I also missed out on engagement..

You see, I can't spend 24/7 online, so I gave up my attempts to spend time on other authors content, because I had to focus on my own. I felt that the best idea were to give 101% to my audience, which would obviously be to answer any of their questions, or by replying to their comments on my articles...

Even though nothing is foolproof, and I can't know if this is truly true or not, I still believe I missed out on a great deal of fun by doing things the way I did. It was like pushing the snowball straight into a hole, so I literally stopped the snowball before it was in its full effect. That means, that I likely stopped growing my audience and ultimately missed out on a great deal of rewards over time as well. I stopped having fun, which was my main motivator during the early days.

The less fun I had, the more mistakes I made.

My best advice to any content creator on Hive or any community, is to be consistent, but going outside of your own profile. Grow your audience by reading other peoples articles and by making comments. That is how you will attract new eyeballs towards your own profile and your own content. That is how you will grow your audience.. And ultimately, how you will be rewarded more, as long as you produce quality content.. And as long as you stick to it.

Give your content more visibility. You deserve it, and we deserve it too.

I am not trying to defend my actions, but one major factor for my previous mistakes is the fact that auto-votes came into place. Auto became the new thing and with more automatic means came less manual work. Which obviously included both manual curation but also comments. It was easy (at least for me) to notice how authors started to produce more content while also getting less comments. It was less interaction and less engagement, so my coming mistakes were literally bond to happen due to how my mindset had become.

With the new curve on #LEOFinance, I am sure things will be different in the near future. Perhaps I'm a bit gullible, but I don't expect everything to change. I know that auto-votes will continue and still be a huge thing. I also think that is an important part of the growth of Hive. But, I do believe that we will see more passive users become more active due to these recent changes, and that will yield great results in terms of engagement. I am positive of that fact.

And how can I be so sure of that?
It's actually simple. I think manual curation will rocket the overall engagement because manual voters are more eager to reward good content rather than just voting on whatever content there is for curation rewards, which ultimately leads to more content consuming, which should lead to more comments as well.

Content consumers, AKA potential voters, also happens to be your best chance to grow your audience, meaning an increased chance for more rewards further on.

All the tools are here for you to use as you see fit. How you eventually use them are up to each of you. I know what I'll do, and I will make sure that I don't make the same mistake twice.

Strive To Push The Snowball Down The Hill.