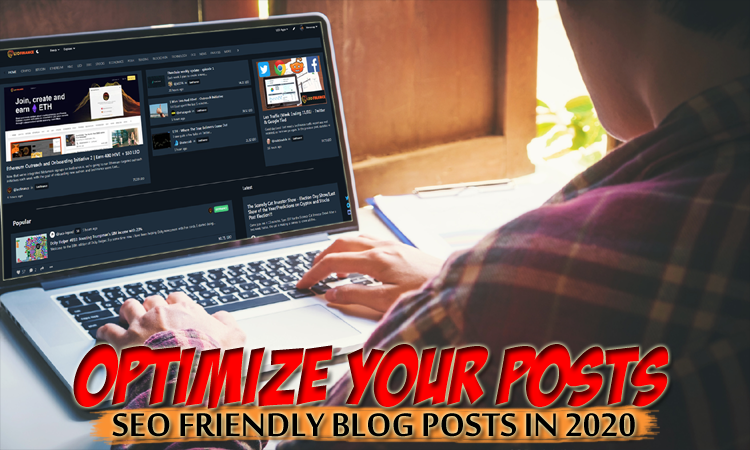 I will go a bit deeper than that though. I will try to explain why website traffic is important and I will also show you 'how to write seo friendly posts'. Truth is, that SEO friendly posts is important for us on Hive and on each of the communities as well, but most authors aren't aware of that. They think that LEOFinance, Neoxian, other communities or even Hive itself generates traffic because of marketing in various forms. Because people are promoting it on social media such as Twitter. That is obviously true, but only to some extent. Behind the scenes so to speak, we have SEO. Search Engine Optimization. This is where our content makes a difference and where we as authors can have a huge impact on rankings and how that will lead to more traffic.

Before we dive into this, I want to tell you that this will be split into two different parts to make it easier to read and understand, but also to not have an insane wall of text.

The truth is, that many authors fails to take advantage of the enormous marketing potential they have with their content, and many of them are not even aware of the 'traffic generators' they publish. That is the truth though, content in all forms generates traffic, even on Hive. While most users are trying desperately to catch the attention of wealthier accounts or even whales with long articles or "eye catching" titles, they automatically neglects the potential of the next whales. The future ones. This is very common on all Hive communities because of one thing; rewards.

While most existing users would likely fully understand those attempts, traffic is important and has an impact in three different ways. Even though it might sound very logical for some, there are others who've never given this a thought before..

In a nutshell, these are the three different ways:

This goes for any online business and Hive is actually not that different. You just have to edit these points a bit for them to fit perfectly on Hive and any of the communities.

On LEOFinance for instance, we have ad revenue. That's obviously important for the overall growth of LEOFinance, especially as the Ad revenue is used to burn LEO. So, the more traffic we can generate and steer towards LEOFinance.io, LeoPedia, LeoDex and Hivestats, the more burned tokens we will get. On Hive or other communities traffic is important as we ultimately want more users on board.

Traffic is usually divided into different groups. In tiers. Tier 1, Tier 2 and Tier 3 etc. That is what you call Geo-targeting, which basically means that traffic from the U.S are worth more than traffic from India for instance. While the different Tiers are not important in terms of users we get on board, as anyone from anywhere can be part of Hive, Tiers are important in terms of traffic for the Ad revenue of LEOFinance.

This generally means 'more paying customers'. Regardless of the amount of visits you have, you want to convert these visits. You want to convert as much as possible. With Hive or any of the communities, we don't need paying customers in the same sense as we would need them if we had a grocery store or if we sold products online. We blog and earn. We share, connect and earn. But, there is a good chance of people powering up and/or invest to purchase more power, which gives us an even better distribution, stronger platform and ultimately a higher value of our tokens.

With that being said, this simply means that traffic is vital for growth, and growth is crucial for our success. As these things goes hand in hand, content creators should also think about how they write their posts. You can write about whatever subject or topic you want because everything will rank, but how you optimize your posts is definitely something to keep in mind when you're about to publish something. Optimized content tends to rank faster and higher in the search results, and that is what we should strive for. Along with social media promotion and other forms of advertising campaigns. All these things are worth doing.

So, while this article was more about traffic and why it is important, I figured I would include the actual SEO tips in the second article. This subject is so complex so I could easily write 5+ fully blown articles about it, but I will start with 2 articles, and see if there is room and/or interest for more.

What I want to leave you all with is that you should try to optimize your posts, and I will show you how in the second post, except for one starting tip. I will most likely publish the second article within the next 20 hours (hopefully long before that as I want to complete this before moving to the next thing), and I promise you that you will help Hive or any other community you are involved with by implementing some of the things I'm about to share.

The first tip, or thing you should do is:

I know, I know, this might sound boring and you have probably heard it hundreds of times already, perhaps even more than that, but the reason for that is because it is important. While being important it's only one of the things you should focus on to improve your rankings and attract more visits. If done properly, this will be one of the steps to high rankings.

You should use keywords throughout your post. This specific article might not be the most perfect example of a truly SEO friendly article, but it is good enough to give you an example of a keyword at least:

The title of this article is:
How To Write SEO Friendly POSTS In 2020

But I have also added something more than that:

So the title of this post is divided into 2 titles. This was not done with ranking in mind, it was only to separate the two posts easily, as the next one will have a slightly different name. However, both "titles" (sentences) includes keywords I want to use throughout this post. "Traffic" is definitely not an easy keyword to rank, but it still is one of the keywords within this article. Not only because I have mentioned traffic multiple times, but also because I have used that word in different places. (title, introductory sentence, subheadings). As it is frequently being used throughout the entire article, it could actually be seen as some sort of keyword stuffing, but most keywords are used multiple times in content that is ranking high.

What you should think about when using your keywords is to place them where they will have the most impact for both humans and search engine crawlers. The best places are usually:

These small things, the optimization, will help you to boost traffic and eventually rank higher on search engines. That is obviously important to attract even more traffic, important for conversions and it will also increase Ad revenue on LEOFinance and increase the chances for overall growth even further. Easy as pie, and anyone can do it. In the next 'How To Write SEO Friendly POSTS', I'll talk about a handful of other things you should think of if you are looking to optimize your posts. The funny thing is that some of those things actually helps you personally to attract more readers to your own content which automatically leads to a higher chance of being rewarded as well.

Make sure to check this post by fknmayhem. "How to Improve the SEO of Your LeoFinance Content with One Simple Trick — And for Every Other Tribe Too" somewhat inspired me to do this one. A solid trick to improve SEO in that one.