No, It's Not 'Getting Harder To Earn On LeoFinance'. Someone asked me on Discord after my recent article how I could continue to publish content without being rewarded for my contributions. I often ignore DM's talking about rewards as most of them are usually ending up asking for upvotes and follows but I did something different this time.

I care about the platform and I love to educate, help and motivate others around me, and as I have focused much on lesser accounts throughout my time here, I knew it was the perfect time to explain exactly why I continue to be active and why I will continue to produce content on LeoFinance.

The question was: "Why make content when rewards are low?"

This user compared the rewards from several authors, including myself, and he had "figured out" that I earned less than ever before so he was curious to know why I continue to create content.

At first glance, I guess you can say that he is somewhat right, as many of my posts has seen rewards of ~100 LEO and my two latest posts (at the time I'm writing this) has pending rewards of ~5 LEO.

That's a huge difference and the truth is that I have only one previous article that paid out ~5 LEO. All of my other articles I have published during 2+ months have reached well-more rewards than that. There are a handful of factors for this, including the actual distribution of tokens, but I will cover the few reasons that matters most to me, and how you can change your initial mindset despite the "low rewards". I personally display the rewards in LEO, because I have been here long enough to know that money often affects my performance in a negative way, so looking at tokens makes things easier for myself. However, if we compare the rewards of my latest articles with the ones prior to that, I can see why some would rather ignore the amount of tokens and look at the $ instead.

That article I mentioned, that paid out at ~5 LEO, that would be worth $2.84 USD today. It paid out 1+ month ago though, when the price was less, which simply means that the article was worth less than $2.84 when it paid out.. So the articles I have today, sitting at ~5 LEO is worth more.

Another thing to keep in mind is that those $2+ I get from sharing content on LeoFinance is $2+ more than I have ever earned for my posts on Facebook, Twitter, Instagram or from any other social media platform or online forum, and I have been an active 'content sharer' for 2 decades.

To make things easier to understand though, I will show you a few of onealfa.leo's votes. You have probably heard of him before, and his votes are vote a lot. ~100 LEO at one point, but those days are gone. 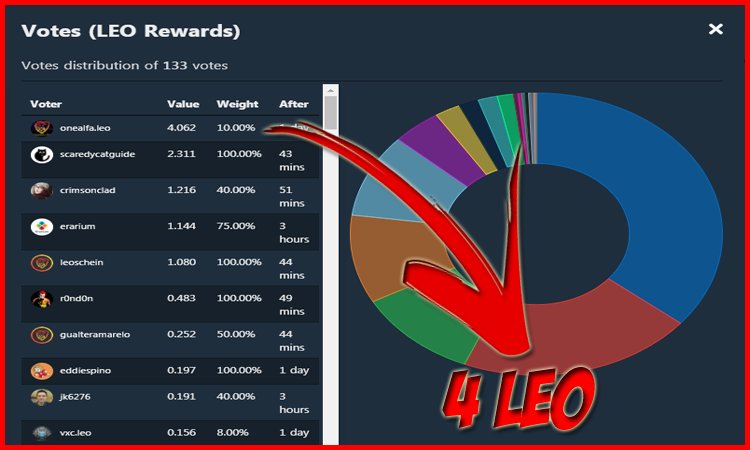 My articles that has pending rewards of ~$2 is worth more or less the same as a 10% vote from onealfa, so the days of having 100 LEO votes are gone, but that is totally fine and actually something we should be happy about. One could simply say that the less LEO tokens we see, the higher the price of the tokens. This post could easily have been split into multiple parts if I wanted too, but I think it's vital for this to be a "all-in-one" post, to make people understand things from the get go so I'll continue to make this somewhat easy-to-read and understand. That being said, the timing of your posts are another factor that might either "make" or "break" the potential of rewards. Especially on other communities with a different reward curve compared to LeoFinance.

The reason for me to talk specifically about LeoFinance compared to others are due to the current reward curve we have, as that gives people a higher chance of being rewarded. This can easily be seen by looking at the time of votes.

We are used to see votes within the first few minutes but LeoFinance gives you a higher chance to be rewarded due to the fact that curators earn 50% of their votes, regardless of the time they vote, so curators doesn't have to compete for the best curation rewards. This also gives content creators a higher chance to see increasing engagement, meaning comments, on articles, as many curators are more eager to reward good content they care about, rather than just giving out upvotes to whatever content that is newly created.

To give you an even better explanation, let's call those votes "delayed votes": As you can see, many of the votes comes in after 1 day, and the truth is that content that was created yesterday is actually considered to be rather old on Hive and other communities, where that same content still gets upvotes on LeoFinance. Many of the upvotes I get on my articles comes in up to 3 days after I have published the articles and from my understanding, LeoFinance is working on something that will give authors an even higher chance of being rewarded for their content, as authors will be able to earn rewards on content forever instead of being limited to the 7 days it takes for rewards to be paid out currently.

Even though I didn't talk about this in my previous article about Evergreen Content, you need to understand the massive potential this gives you to earn rewards from long-lasting content, while that same content can- and will help us in terms of rankings, organic traffic and growth.

The last 'tip' I will give you is to ignore the rewards you make. I know it's difficult, but it will make things much easier for you. If you ignore the tokens and the $, you will contribute and do things because you want to instead of feeling "forced" to do it.