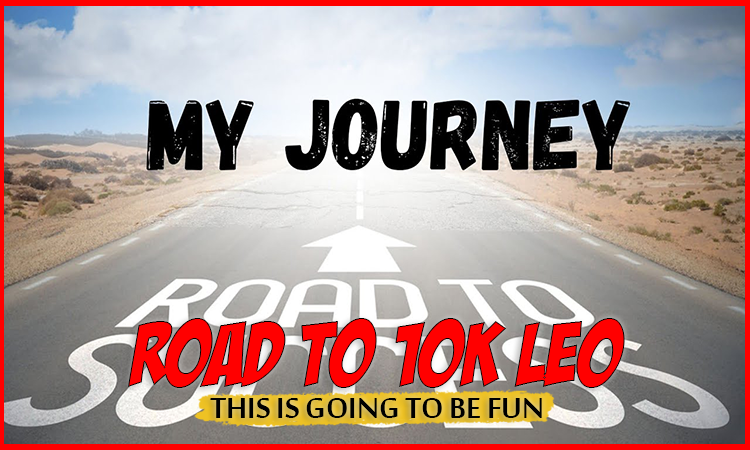 I am currently sitting at 5,509 LEO, with 301.825 LEO tokens sitting in my balance and the entire crypto market is dire. We see red numbers all over the place. People are talking about "The Never-Ending Crash Of Crypto" and whatever. People are losing a shit ton of money. Some people have lost their entire life savings and even though I am far away from doing that, I would've been better off a couple of months back, if I would've sold my tokens at that point. In terms of short term profits.

So, here's the thing. I am "one of those people" who don't believe that Bitcoin will ever replace fiat. I don't think we will see BTC sitting at $500K or any other dreamlike scenario. I don't judge believers, but I am not one of those hardcore believers myself. I would be glad to see such high prices at one point, but I honestly think that $100K is by far the most we will ever see. Despite any halvings or multi-billionaires going in with millions or billions. I don't think it would rocket the price by that much. I have never believed that.

I also do not think that we will ever see Hive at thousands of dollars and definitely not LEO tokens. I might be totally wrong, and I actually wish that I will be proven otherwise.

That does not make me a non-believer though. I personally would call it to be somewhat of a realist, but I don't mind if others would call me something different.

However, I do believe that Hive is a bargain at these prices, but I also think that things have gone too far to ever see a price at such heights at $1000+ per token. We might see $10 though, and I would be perfectly fine with that. I am pretty sure that others would be equally fine with a price like that.

In regards to LEO, I think a price of roughly $2 or perhaps $3 is rather likely to happen, and that is actually very decent as well. My 5.5K LEO tokens would be worth $11000 USD if we would reach $2 per token.

I have given away something like 1600 LEO or so due to my recent contests, so I could've had been up to roughly 7000 LEO instead, if I would've powered it all up.. But I am not really like that. I think- and do things differently from others most of the time. Both online and offline.

I am far more interested in "lifting the entire community" and up my own stake over time, while the price is going up. I would obviously be much better off personally by doing the exact opposite, like some are doing, but I have figured out a long time ago that we are actually damaging ourselves due to that behaviour.

You see, I firmly believe that someone who is only looking after themselves and their own stakes are not contributing to something sustainable, which leads to stagnation instead of growth.

I could probably discuss this for hours, but I also know that we somewhat need everyone at this stage. I will say that selfishness is unattractive though, and if that sort of behaviour spreads like the plague, why would an outsider ever want to join?

That being said, I obviously do not mean that people should give away everything they earn for random reasons just for the sake of giving things away. I just mean that everyone cannot be selfish. This entire place would've crashed and burned a long time ago if that where the case.

This is something that will lead to organic and natural growth over time, and people is what is going to bring us to new heights. With more people, we will have more tokens being spread, bought, traded and powered up, which is something that will push the price of our tokens to new heights automatically. This is where the value will actually increase.

Don't believe me? - Just look at Hive. We would've been worth thousands a long time ago if it was all about the actual invention. And why? - Because Hive is basically impossible to beat for any other crypto out there. Zero fees, awesome communities, great development and whatever.

I do believe that we have a life changing opportunity with Hive and LeoFinance. I truly believe that and I will explain why..

Look at the prices we have right now:

How about your LEO being worth $0.1 per token..? Your stake would rapidly increase roughly 2x. Also, even though I personally think that Hive is very under-valued right now, I am still powering down some of it, just to buy LEO tokens instead.

That is not because I think Hive will crash, but I just can't resist to buy LEO for Hive at these prices, as I will get a bunch of LEO for just a few Hive. It's a superb opportunity for me to grab "extra" LEO for dirt cheap.

With more stake, I will also earn more in curation rewards, so it will give me a bunch more LEO in total, while having a great chance of looking at my wallet a few weeks or months from now and see the value of the tokens have doubled or even tripled.

That's the reason for my 10K LEO journey. I'll go towards 10K and once I've reached that amount, I will set a new goal to go higher and higher until I finally decide to cash out some of it.

Why would I spend time and/or invest in various crypto if I never cashed out? I'm still in this whole thing for me and myself. To change my life in some way. To help me in life financially.

I know that I am not likely to ever become a multi-millionaire from Hive or any of it's communities, but cashing out to get a few extra thousand of dollars every now and then..?

That would give me roughly 3 LEO per day from curation alone. That's 90 LEO per month. 1080 LEO per year. How about cashing out say 1000 LEO per year if the tokens where worth $2?

That's roughly what I make in a month from my job.

How about cashing out something 2 years from now instead? If I where at 10K LEO and earned 1080 per year only from curation, I would be up to more than 12000 LEO two years from now.

How about cashing out 2000 LEO just a single month to have some extra money? An easy $4000 if LEO tokens where worth $2 a piece. That's an awesome holiday.

The possibilities are literally endless, and that is also why it's a life-changing opportunity for me. It's just a matter of deciding on what life-changing means to you..

With an obvious bias, I do believe this will happen! Most people only see things at the surface level. Dig deeper and you can see the long-term vision of the LeoFinance ecosystem. It’s incredible to imagine the potential 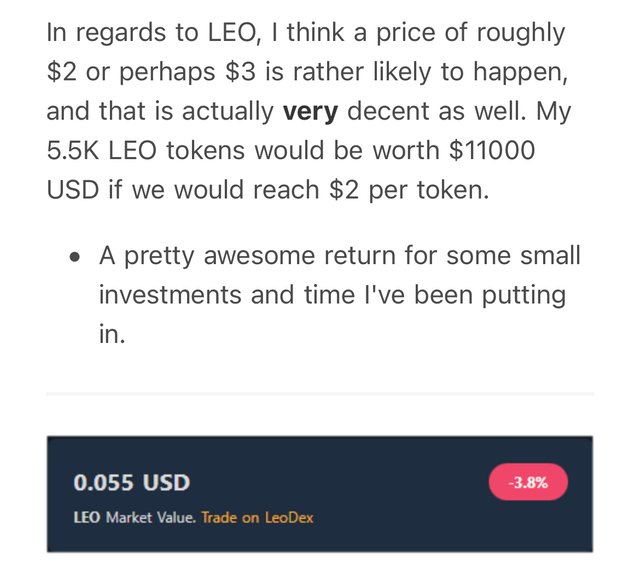 With all the things going on around here, in terms of development, the active community and overall great atmosphere, I am sure it's just a matter of time.

We need more people, and more people will come due to all of these things, among other things.

"We need more people, and more people will come due to all of these things, among other things."

100%. It's a pivotal moment in the LeoVerse. Time to step things up to the next level

Yeah, I definitely believe so too!

I also think that Hive and Leo are great bets, and frankly that Leo is even a better one due to the ability to buy into influence and unmatched opportunity.

Hive is never bad in bear season, and I agree, I don't ever expect mass adoption the way it gets talked about, but I do expect solid growth and projects like Splinterlands, 3speak and Leo to life up the entire ecosystem.

Leo at .05 is amazing and if we weren't struggling with a major and expensive illness in my family right now, I'd be doubling my stake.

Leo at .05 is amazing and if we weren't struggling with a major and expensive illness in my family right now, I'd be doubling my stake.

I hear you. I don't live under those same circumstances, but there are a bunch of things that doesn't really allow me to buy into anything at this point. That's basically why I've decided to powerdown some of my Hive to tap into more LEO at these prices.

I honestly don't think that's a bad plan, I often switch my hbd to leo, via first the internal market and then leodex.

We're still going down, just like the "mothership" Bitcoin.

Look at the bright side. The cheaper the cryptocurrencies, the more you can buy.

That is true. But it's also difficult for people to buy just to see the prices go down even further afterwards..

It's basically like gambling. Don't gamble for more than you can afford to lose, but that's a rather harsh reality for people in crypto. To invest a bunch of money just to see the token prices crash even more.

This is rather a patience game than gambling. Cryptocurrency (similarly to many other things) has its cycles. It will go up eventually. Maybe in months. Maybe in years.

I totally agree with you, but seriously though..

How do anyone actually know that it will go up again? The only thing that says it will, is believers and history.

I believe or know that it will go up again, I'm sure of that personally, but can anyone actually be 100% sure of it?

There is a huge demand for cryptocurrency worldwide. A lot of people are interested in it. And more and more people are getting involved in it. I do not see why it would not go up over time. Of course there is still no 100% guarantee for it. I agree that cryptocurrency has its own risks, and everyone should invest in them responsibly. But it is not gambling. Just a relatively high risk investment. Similarly to the stock market. There is a much greater chance to win with cryptocurrency or with the stock market than to win with lottery.

There is a much greater chance to win with cryptocurrency or with the stock market than to win with lottery.

That's a very good point and I totally agree with that. It's high risk investment and not gambling. Very true.

I do believe Hive as a platform is being very underestimated. Think of when we have a mass adoption. That could change the game for Hive ecosystem.

Mass adoption would be terrific, but I don't count on that to ever happen, unfortunately. Perhaps at some point in my life, but I don't expect it to happen anytime soon.

I honestly think that we would've been much bigger by now, if mass adoption was likely to ever happen..

It has endless possibilities because 1 LEO is 1 LEO. The price of LEO will definitely rebound but I wonder if we will ever reach the $2 mark or not. Growth is growth and it could be life-changing money

In a world full of hype, being a realist is quite necessary. Hive is one of the best blockchains out there but then are many people aware of that? Ultimately, the users decide where value is.

but then are many people aware of that?

Exactly, and no, they are not. Most people are still not aware of the fact that Hive exists, and that's one of the biggest issues with this whole shebang.

I totally agree with you. It's a big issue!

Big time milestones. Now is the time to build. You don't buid during a rally. While there are wild swings what you build today could be work 3x 10x maybe even more a year from now.