The Fear Of The RED Is The Golden Opportunity 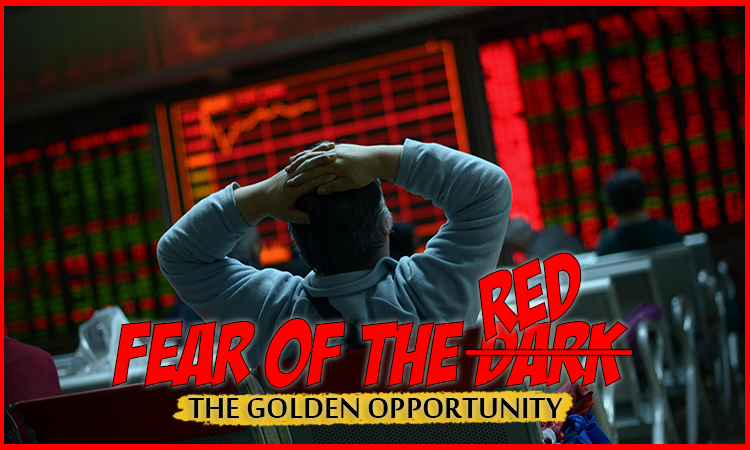 Afraid Of The Red?

Bitcoin is down 8,89% in the last 24 hours and to see our own beloving tokens fall from the skies without a parachute or something like a safetynet is obviously very horrifying. Life savings, dreams of becoming the next crypto-millionaire or pension funds are being shattered with the decline in price.

It is safe to say that people are worried and they should be, because most people doesn't appreciate to lose money. Everyone wants to win, but not everyone will. That would never work in crypto. If you are going to be rich on crypto, someone else has to pay. It's the sad reality.

Someone has to buy when you sell, at whatever price you feel comfortable selling at. Are you looking for 2x or 200x? Perhaps 2000x? - Someone has to pay, and you are fine with that as long as you are not on the end of the stick that pays. - Right?

Look at the mother of all crypto, BTC. Down ~10% in 24 hours. I've already seen people talking about losing $100K, $300K. People have lost their entire life savings according to what some of them claim. I don't know if that is true or not, but I do know that they are telling the truth to some extent at least. 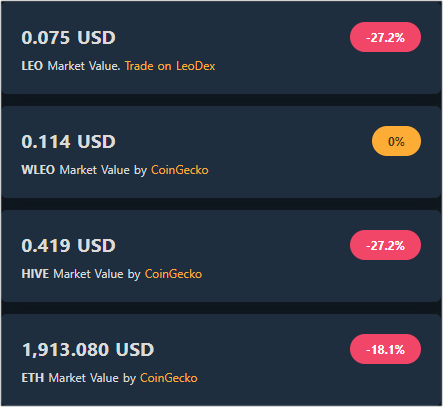 I buy BTC once per month, for the same amount each month, regardless of the price. It's a long-time investment, that hopefully will pay off in (a few?) years from now. I don't care about the price when I buy, because I have decided to do this long-term investing for X-amount of time. In my specific case I'll continue to do this until 2025 before taking a closer look at my holdings and decide which direction I'll go from there.

I don't buy any significant amounts per month and I don't have a dozen of BTC, but I am buying once per month for an amount of money that I can totally afford to lose.

Other than Bitcoin, I focus on LEO, Hive and HBD. In that order as well, because I've bought LEO for each and any of my HBD rewards for a couple of weeks in an attempt of reaching my first LEO milestone of 5000 LEO. 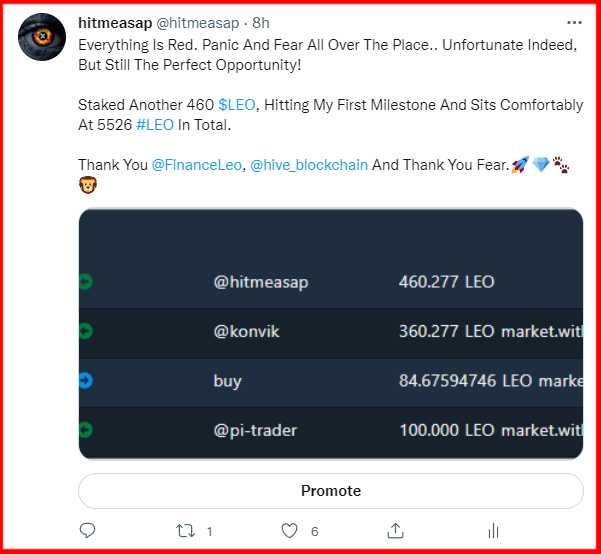 5526 LEO, pending payouts of roughly 300 LEO where 50% of it goes straight towards my stake and the other half goes to curators. I'll be up to ~5700. With the pending payouts in HBD, if I continue to buy LEO for my HBD rewards, I am likely to pass 6000 LEO within just a few days. (20% more than my initial milestone!)

I don't know for sure due to not having full voting power, but my vote on LEO should be worth ~0.5 LEO. Let's say it's worth 0.5 exactly to make things easier. As you can basically vote 10 times per day at 100% voting power, and recover your VP to the next day, that makes my votes worth 5 LEO in total.

50% of that goes to my own growth and the other half goes to the authors. I am not talking millions or life changing money by any means, but at the end of the day, I grow my account by 2.5 LEO just for voting on content. That's 912.5 LEO per year.

How does an extra $912 per year sound like, when the only thing you have to do is to upvote some posts here and there? - I bet you'd be more than satisfied with that.

However, due to the continued growth over time, my vote becomes more powerful as well. Meaning more LEO in my own- and your pockets for each vote.

Don't look at the $ symbol though. Try to look at tokens as tokens instead of money. Especially during these harsh market times. By doing that, you are more likely to hold and continue to invest or contribute. You are likely to remain active while others are running away.

This Is YOUR Chance

Hive never sleeps. Heavily invested whales and a lot of other users on Hive is looking for content to curate, regardless of the price. Curation doesn't stop because the market is red. Curation continues, but with a minor twist. And that gives you an advantage.

People are slowing down during declines because it doesn't feel “worth it” anymore. Honestly, if you could spend one hour on a post and earn $50 or $5, you would always chose $50. It’s the only logical thing to do, but instead of going for the $5, people stop producing content and awaits for the green numbers to show up before continuing again. That's the danger of looking at $ instead of tokens.

If you continue to be active and remain consistent in producing content or engaging, it is very likely that you will be seen by others who previously have not been aware of your existence. There's a lot of competition on Hive in general, due to all the people creating content. It can be difficult to get recognition.

How about taking advantage of the space people give you when they decide to become inactive? Imagine the people (curators) relying on user-x to produce content so they can receive curation rewards. When user-x decides to stop producing content, the curators are missing out on curation rewards from that author. They need to recover those curation rewards in some other ways.

Think this might have something good with it. Hope to see a "cleanse" of really bad/scam crypto project now so the solid project can come out on the other side even stronger.

That would be cool, but I don't think scams will stop, regardless of the price. As long as there's the smallest chance for someone to make something, they'll always be rotten eggs out there.

Nah I agree that there will always be scams. But would be good to cleanse some of them away because there are so many crazy projects out there now.

Yeah, indeed. It's a bit too easy to be shady in crypto, unfortunately.

I am not ready to buy bitcoin at any price, as a rule, it turns out to buy a little cheaper than I see at the top of the market). As for the whales, that would be nice).

I can totally understand why people aren't willing to buy BTC at whatever price, and I honestly don't think it's the best approach in terms of making profit. It works for me though, and it doesn't make me go crazy when the markets are bleeding.

Yeah, I guess you could call it that. I am not that disciplined in general actually, but this is going well so far at least.

It is my time to shine indeed 😅 I should get a candle stick that wouldn't go off at all 😂 thanks for this post @hitmeasap I learnt a lot from your achievements.

Hitting your milestone even more than your milestone, congrats on that 🙌 more to come and I see you're relentless, that's inspiring.

But you were thanking fear in your tweet 😂 I don't get that very well 😅 did fear did something good?

Well, engagement is not only to get noticed... It's super fun and creating good contents more now is surely going to help grow one's account.

did fear did something good?

That totally depends on how you see things. In this case, I think it's awesome, because fear is basically what is driving the prices down even further, which in turn makes it cheaper to buy.

Well, engagement is not only to get noticed... It's super fun and creating good contents more now is surely going to help grow one's account.

Indeed! Engagement is vital for long-term success, as people aren't likely to join a social platform that is non-social. That's why it's important to be, and look active for outsiders. It's also awesome as you can share knowledge and learn new things.

fear is basically what is driving the prices down

Oh I get it now, that's really a thing to thank fear for 😅 still sounding funny though.

Engagement is a key that shouldn't be misplaced 😊

Well, frankly, I don't worry for the prices of Leo at the moment.
I take it as a long term project and that's why I am staking it.

Its even better to get in now more than ever.

We all should have a long term view, to get the best out of our investments.
Leo does have a great future value.

It's an amazing opportunity to get in right now, if you believe in the projects.

Sounds like a really good plan. It's definitely what most people should be doing, but we all come from different places.

That's pretty much my own strategy

I'm focused on LEO, Hive and HBD. Other than that I also buy BTC regularly regardless of price

We sure have the opportunity to earn more token right now due to the current market. It would be a shame to give up now.

I believe I'll be able to achieve my LP goal too during this period with some buying here and there.

That sounds great. It's a superb chance right now to get in.

Thank you! Yeah, it's great. It's obviously sad to see the prices, but it also gives us a chance to get our hands on more. So it's a win/win. :)

You're doing an awesome job with the engagement so I definitely don't blame you for not making more posts. I would never be able to keep up with making comments and posts at your pace.