Maybe that's not something huge to brag about. Looking at the POB Richlist again I can see that staking Proof of Brain is almost the universal thing to do. Currently at the time of this posting only a dozen accounts have a pending unstake of more than 1.0 POB. Looking at the stats on proofofbrain.io I can see that over 90% of existing POB tokens are staked. There sure is a lot of desire for the Proof of Brain token. 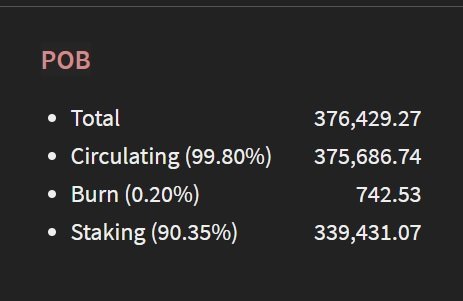 Nice, that is a lot of brain you staking! We are staking all of ours too! Big up the Brain!

Am just around hitting 2k, congrats on your stake, overtime it will be more than expected

That is a quite big amount of staking you have done. I am sure your up-vote will be much more valuable in the days to come and you can also have a lot of income from curation now.

Is the POB stake matters, if I use Ecency, and not proofofbrain.io?

Some high amounts in there already! I'm sure demand for this token will keep on climbing and I'm curious the direction they move in next.

Thank you. I am curious also about POB's future.