Beware of Scams - All that glitters is not gold

Hello and welcome to all the readers.

Today, lets talks about the latest scam comments on hive.

The hacked accounts were used to comment on multiple posts claiming the rewards for a task or promotion.
Basically, visit an external site, where they ask you to signup or verify your hive details with your keys to claim the hive/hive-engine tokens
A fake promotion to get your keys and take over the control of your account.

So how do you handle this type of scamming?

Firstly, never share/login with your active/owner/master key on unknown websites.
These keys are not required for login or doing daily tasks like posting, commenting, curating.

Secondly, check the discord of the token that is been offered as reward.
In the latest scam, they were offering leo as reward and indicating that it was promoted by leofinance.
Login into Discord for leofinance and check or query about this offer.

Thirdly, if they ask you to signup with your active or owner keys then its a red flag.
Posting key is enough to login into the websites related to hive.
All genuine websites have ability to login using secure hivesigner or keychain.

Let me share with you the comments i recieved and how i figured out it was fake/scam.

Here, the user claims that she has collected 300 hive and i can also do that by clicking on the link.

I did click the link to check the authencity. [Not recommended].

Then, i went on peakd.com and checked her wallet, as she had claimed to have recieved the 300 hive reward.
I found no entry of recieving or withdrawing 300 hive.
Any tokens coming in or out, should get registered as it's blockchain, immutable data.

Thus, confirming that it was a scam. 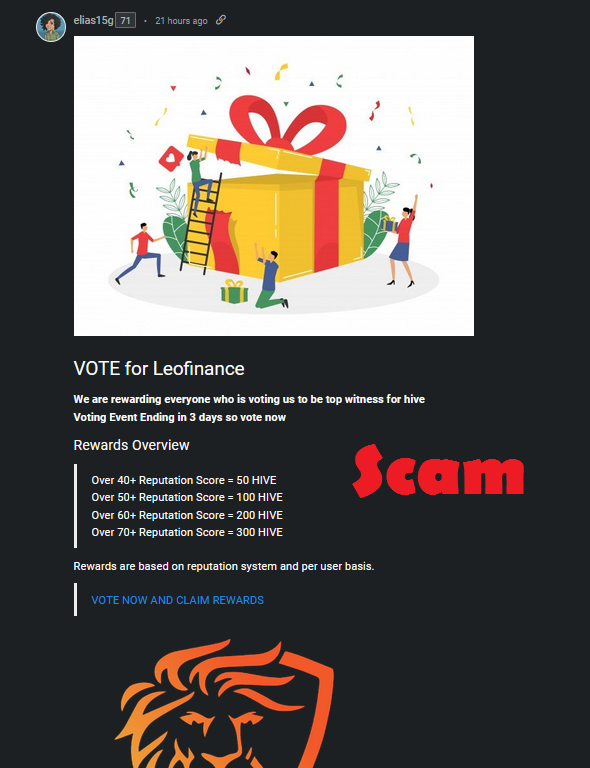 This one claimed to reward leo tokens and it is been run by leofinance.
This itself tells me it is fake/scam as the rewards are unrealistic and the campaign would have been promoted by leofinance on official channels.

Leofinance discord would be another place to look for details.

This was later confirmed that the account of that person was hacked and comments were sent on his behalf.

Also, take backup of all your keys and store it in a secure place.
And preferably not keep the key details on the system you use daily.

If not sure, a simple check and verification before sharing the details can avoid hassles of been scammed or hacked.

thanks for reading my posting

have a nice day