"FALLEN ANGEL - FORGET ME NOT" - Art Process, The Meaning & My "Dirty Little Secret" :)

Today I got a treat for you. I will reveal one of my "painting secrets" to you. We could say I'm celebrating my first power up (steem power) in a while. Feeling positive changes in the air and I hope you do as well! 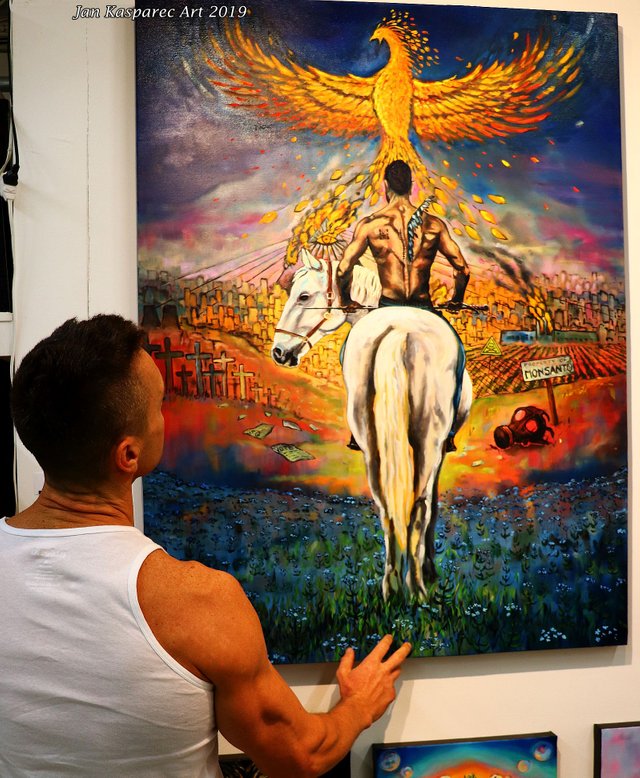 Fallen angel- Forget me not, is a very special art piece to me. Probably one of the most special ones as far as the meaning goes.

Let's begin by that confession then:

That guy on a horse (...remotely similar to a chair)

I had the idea about the painting very clearly in my mind. A fallen angel, sitting on a white horse, impassively overlooking the burning "all seeing eye" and all the venom (represented by Monsanto in this painting) that plaques our beautiful Earth going down in flames while Phoenix rises from its ashes into the sky.

And so I had to go to that one resource which is always here for me- which is me.
This was obviously not the first time that I have "posed" for the purpose of my art. It is very difficult to get a picture of a model online in the exact same pose that you want to see on your canvas. And yes, unlike many might think, it is also near impossible to paint human body in great detail "from the memory" alone. 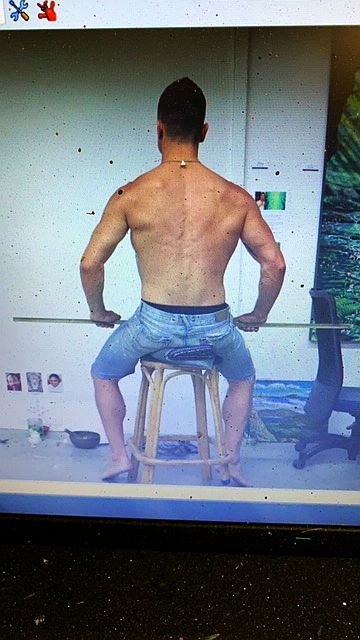 This funny screenshot makes me still chuckle. Me as fallen angel sitting on a horse, resting my hands on a mighty sword, bitcoin address tattooed on my back. Although , in all honesty, I do sometimes feel like it. Often. Like the misunderstood rebel in the midst of brainwashed population who are just not ready to accept that this whole "Earth-show" is a combination of Trueman show and Matrix without the funny part, and that slavery did not end, it's at its very peak.

Anyhow, that's another story for another time.

Now I will show you how this paintings came to be 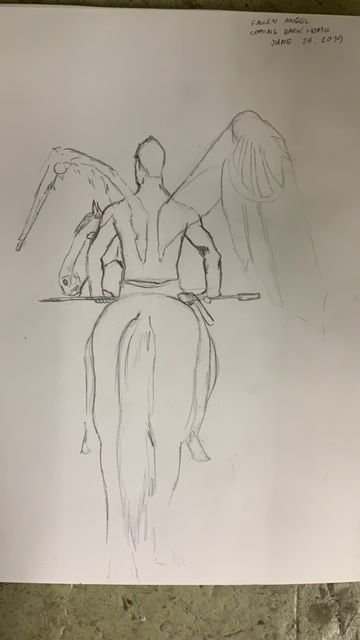 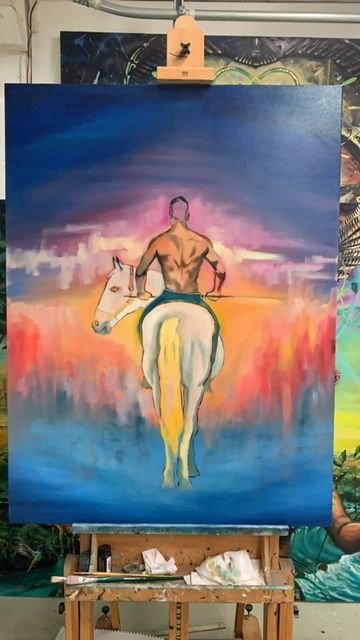 First layer of oil on my 4 feet canvas 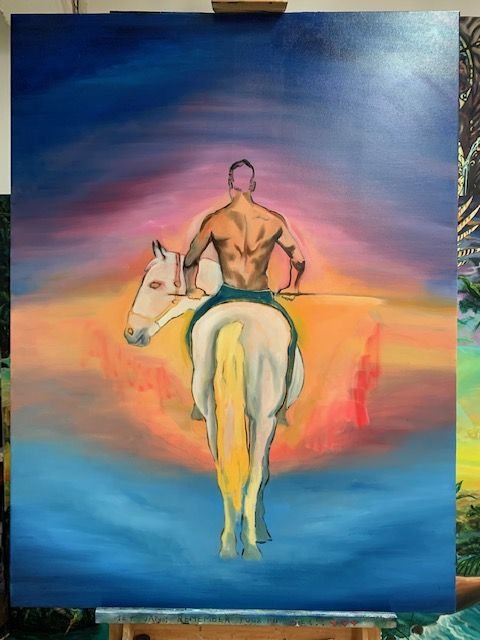 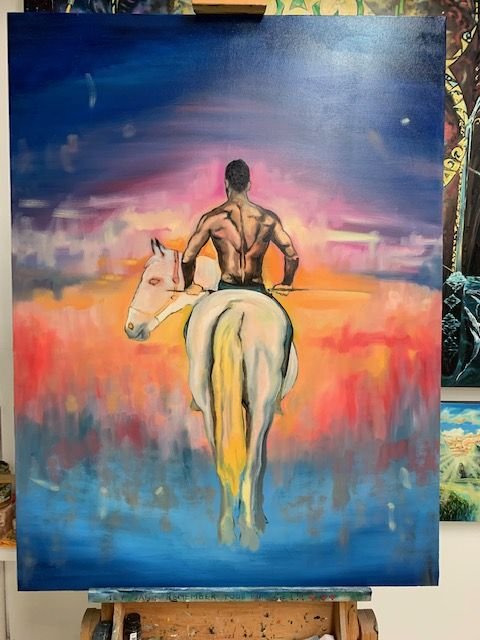 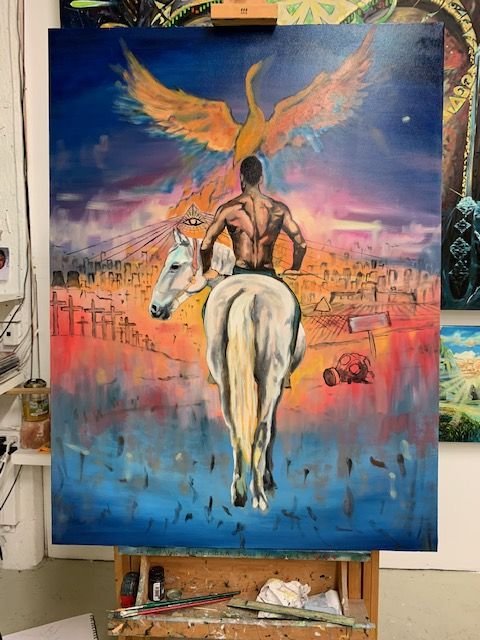 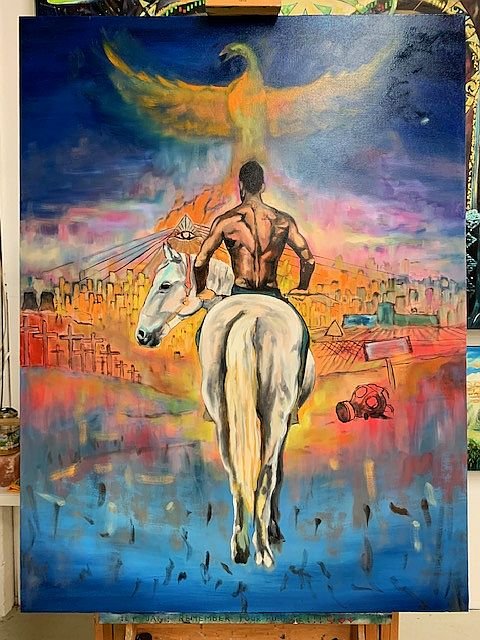 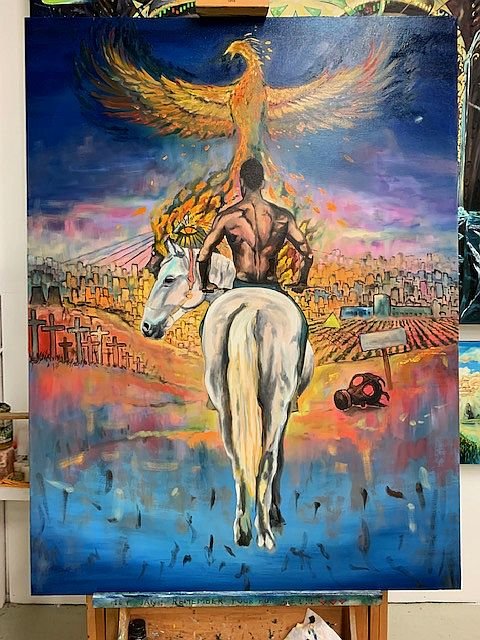 first signs of "forget me nots", a flower which I chose specifically for their name- NO CRIME AGAINST HUMANITY WILL EVER BE FORGOTTEN 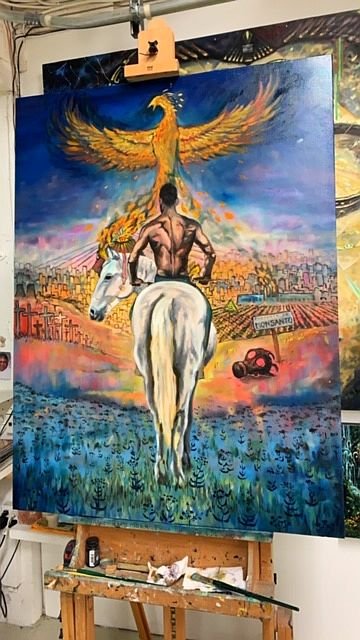 Here is the official story of the Fallen Angel that I wrote for The New Agora newspaper, which put it (together with my other two paintings) on its cover! 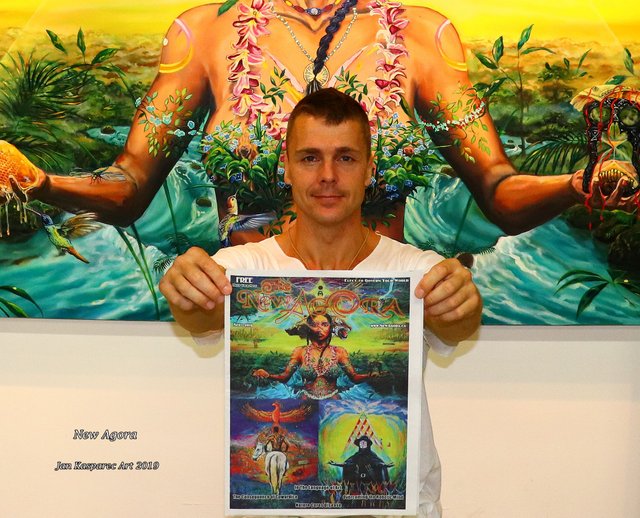 Three of my paintings on the cover of The New Agora- newspaper that actually publishes truth.

He is the Fallen Angel. Poisoned by the likes of Monsanto, disgraced by the slavery system that shackled the humans for eons. One of his wings a burned stump and second one entirely chopped off. There were times when he could fly free on this beautiful Earth and his incarnated form was aware of his higher energetic bodies. The times before The Fall. Before the illusion of separation from the Divine that put everyone is the survival mentality and rat race has fallen upon Gaia. The rule of each for their own, eye for an eye, oblivious of our divine nature and oneness with the rest of Cosmos. But the time of his resurrection has come. The time of the Great Awakening. The time of Remembering. Mounted on his white horse, he quietly observes the burning Eye, out of which the Phoenix is rising, to found The New Earth, the true Fellowship of humans, the Great Synarchy, the beginning of New Era. The days of the Great Illusion are numbered. Nothing but Truth can last forever.

#FINAL RESULT OF THE PAINTING
: 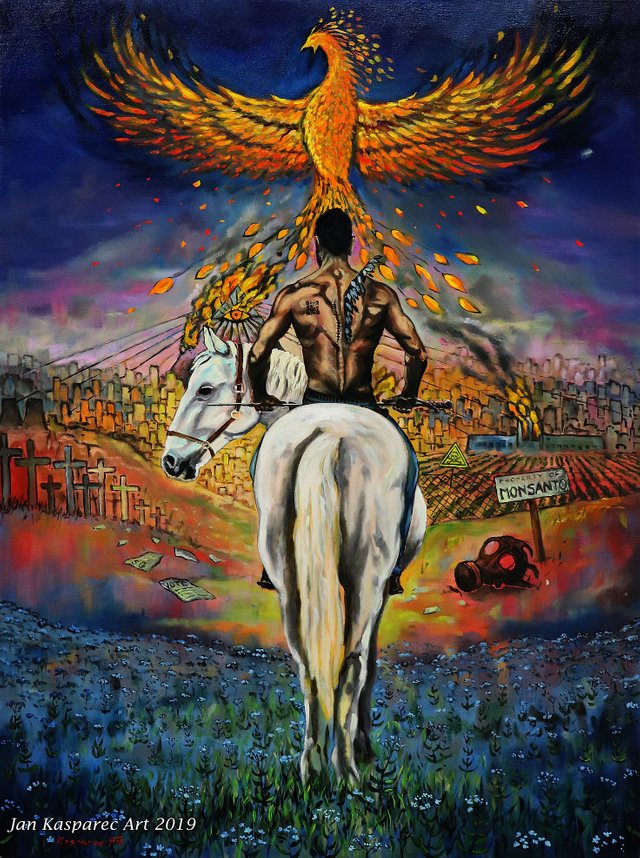 Noticed the bitcoin address on his back? That's how we roll baby!

I hope you liked my confession, painting process and the Fallen Angel story.
Hopefully many of you can relate.

The day when the house of cards is going to collapse is coming!

Thank you for your support 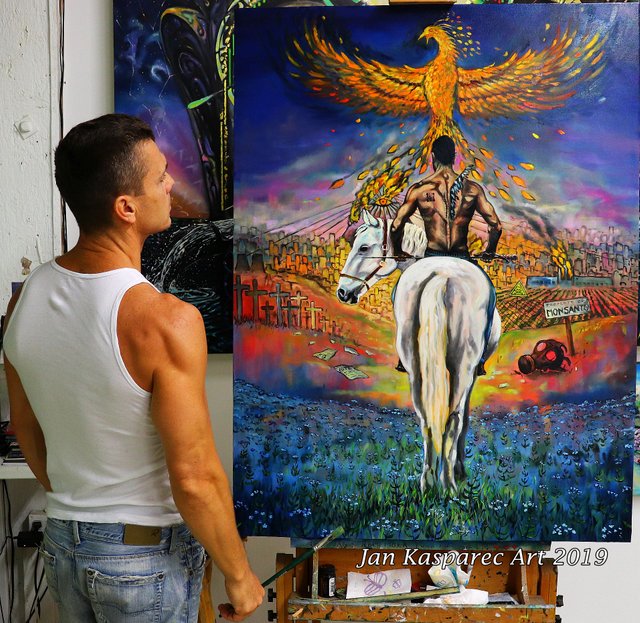 Thanks a lot Kitchen Fairy! <3

Amazing work once more. I have recognized your body shape on the horse right away and I don't even know you in person. This painting fits also right into your other work. I start to see a pattern here.

The Phoenix over the burning earth is incredibly fitting. Particularly now, as Da Vinci is 500 years dead and the elites play with that symbolism all over the place. It is no accident that River Phoenix was selected for the Oscar recently, 888 weeks on the day after his first Wikipedia entry. This is the kind of magic we see every day from the hidden hand.

I invite you to check out my own art on @flauwy.apx, which is not painted but still designed out of worldly events in Photoshop. You will find the Phoenix on several of my artworks.

Just going through it @flauwy. Some bad ass gematria art and articles. Massive respect! I also believe that the elites in power (shady scumbags) are going by numbers all the time. Nothing is random in their sick world, as nothing is random in this beautiful perfect cosmos either. Love Shall Prevail! Much Love and thank you so much for your support!

Ahh haven’t seen you in forever! Glad you are back.

and at the meantime you surpassed me like a champ :D Good job bro! Thanks for welcoming me back <3

Why did you change the direction of the phoenix?

innerblocks
2 yr
Thanks for sharing your experience with us!

You have been curated by @yousafharoonkhan on behalf of Inner Blocks: a community encouraging first hand content, with each individual living their best life, and being responsible for their own well being. #innerblocks Check it out at @innerblocks for the latest information and community updates, or to show your support via delegation.

This one is really awesome. :)

It takes really very hard work with all patients and dignity, hats off to the talent

This is a really nice piece. I like the deeper meanings associated with the scenery. And, the fact that you made time to show the process somewhat is so entertaining and makes on seem involved in the process.

Wow I had no idea until now bruder. Honored! And thank you! <3

This is really beautiful! I loved the whole post, congratulations!