Read the Bitcoin S2F model in one article 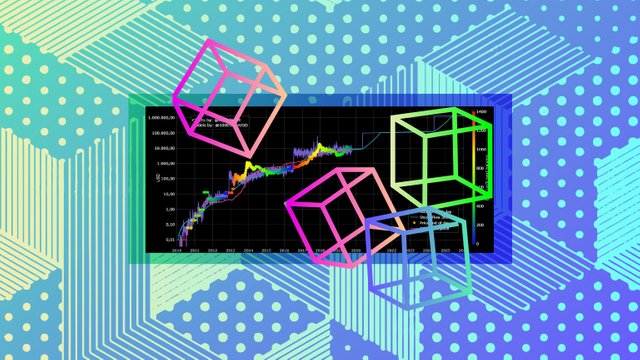 Have you heard of the Bitcoin S2F model?

If not, then you should make up the lesson. This is an exciting but highly controversial topic related to forecasting BTC prices.

One party believes that it is the "Holy Grail" in the mathematical model surrounding Bitcoin's valuation, while critics of "S2F" believe that it is very far from accuracy and should not be used to predict the future trend of BTC.

We write this article to explain the confusion surrounding the Bitcoin S2F model, explain how it works, and its potential use cases and limitations.

What is the Bitcoin S2F model?

The Bitcoin S2F model is a way to measure the scarcity of assets — more specifically, to measure commodities such as gold and silver — is now being applied to BTC.

For a better understanding, let us look at how the S2F model measures commodities like gold.

In the traditional form, the S2F model is used to calculate the abundance of a resource or commodity (we use gold as an example), taking into account the existing total supply and the annual output of assets.

Now, to calculate the SF model, we divide the total supply (stock) of gold by the annual output (flow) to get:

Explain that we used the average annual gold production of 2750 in the above example.

As a result of the calculation, the S2F model shows us how much newly mined gold enters the market each year compared to the total supply of gold.

According to our example, it is estimated that it will take 72 years to produce the same quantity of goods on the market today.

As a rule of thumb, the higher the stock ratio, the fewer new gold bars are minted each year compared to the total supply.

Therefore, a high stock-to-flow ratio can theoretically indicate an increase in the long-term value of an asset, indicating that the tool is not only scarce, but also takes a long time to extract the remaining supply.

How does the Bitcoin S2F model work?

Since Bitcoin is generally regarded as a store of value similar to commodities such as gold and silver , a user named PlanB applied the S2F model to digital assets. He published an article on this topic on Medium in 2019 Article.

It is actually very meaningful to apply the S2F model to Bitcoin. Unlike bulk commodities that can only estimate the stock and flow, the supply changes of BTC are transparently recorded on the blockchain.

Although the maximum supply of Bitcoin is capped at 21 million coins, its supply issuance is programmed at the protocol level, so it is predictable.

As part of the deflation mechanism, in the Bitcoin halving event , the number of BTC created every 210,000 blocks (about once every four years) will be reduced by half.

According to the statistics of Blockchain.com , 18.595 million BTC have been mined, with an annual flow of 328,500 BTC (before the next halving event, approximately 6.25 BTC were mined every 10 minutes).

Therefore, the ratio of Bitcoin stock to flow is equal to 56.60, which means that it will take nearly 57 years to mine the current total supply of BTC (regardless of the maximum cap and halving).

In addition to calculating the stock and flow of BTC, PlanB also compares the Bitcoin S2F model with BTC prices to (potentially) predict the future value changes of digital assets. 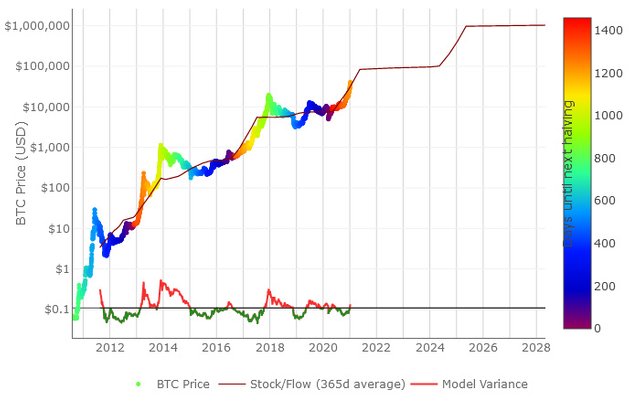 From the chart calculated by the author , we can see that the BTC price more or less follows the 365-day average of the Bitcoin S2F model. In fact, during the period from April 2020 to January 2021, its predictions have been quite accurate.

Limitations of the S2F model and the criticism it faces

Although from a historical point of view, the ratio of bitcoin stock to flow may show a certain correlation with BTC, the model obviously has some limitations in predicting the future value of bitcoin.

For example, the model only takes into account the supply of Bitcoin, but does not consider the market demand for Bitcoin.

Supply and demand are the two main factors that determine asset prices. For this reason, although the stock and flow ratio of BTC will rise in the halving event every four years, if there is a huge drop in demand, its price will drop significantly.

In addition, the Bitcoin S2F model does not take into account the following factors that may have an impact on asset prices.

Some critics go further. Nico Cordeiro, Chief Investment Officer of Strix Leviathan, will use the Bitcoin S2F model to reveal future price changes and compare financial results based on astrology .

The Bitcoin S2F model is a fairly controversial topic in the crypto community.

Regardless of whether the model is effective in practice, it is important not to base important investment decisions solely on S2F Bitcoin price predictions.

The market is complex, and many factors play a role in price discovery. Therefore, it is impossible for anyone (and mathematical models and algorithms) to accurately predict the future long-term price changes of an asset.

However, the Bitcoin S2F model can be a useful tool that allows people to understand the scarcity of Bitcoin and cultivate a long-term value investment thinking, rather than just focusing on temporary price fluctuations.