The two jewels of the crown, what will happen to Bitcoin and Ethereum next year

Foreword: 2020 is a boiling year. From 312 to a new high in Bitcoin, from the DeFi frenzy to the launch of Filecoin. "A bull market can make 10 years of money", but there are also contract losses that lead to tragedies. 2021 is ushered in amidst the noise, but fortunately we still have the freedom to choose.

The following is Wu said that the blockchain year-end inventory of "Boiling 2020" series 1: Ever-changing is inseparable, let's first look at the two major engines of the industry: Bitcoin and Ethereum.

Recently, Ripple was investigated by the SEC, causing all currencies except BTC/ETH to fall sharply. These two mature decentralized cryptocurrencies have become more prominent due to the inability of the government to supervise them. On the morning of the 26th, the price of Bitcoin exceeded US$25,000, a new high.

2020 is coming to an end, and it is worth thinking and looking back at this moment. Some people say that this year is a year of disasters, but hope often coexists with disasters. For the secondary market, this year is a long-lost bull market.

The same is true for the cryptocurrency market. Bitcoin has experienced a trough of 3,000 and reached a new high of 25,000; the reignition of DeFi and the landing of Ethereum 2.0 have forced us to re-examine the value of Ethereum.

Let's review the major events of Bitcoin and Ethereum in 2020 and look forward to the future. (The data below are all data on December 18) 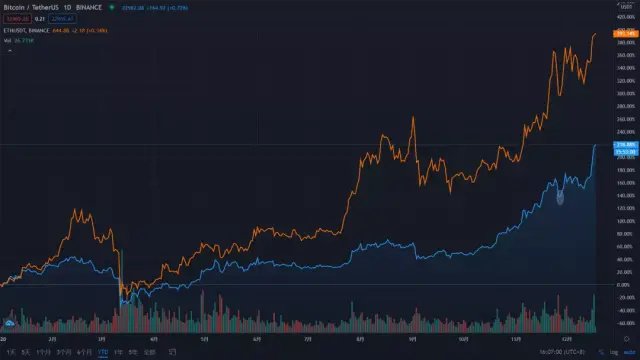 In the face of the sudden slump, the major platform exchanges experienced server freezes at the time of the slump, and even "unplugging the network cable" for offline maintenance. A large number of futures investors suffered heavy losses.

Ⅱ. Bitcoin ushered in the third halving on May 12

On May 12, Bitcoin ushered in the third halving in history, and the block reward was reduced from 12.5 BTC to 6.25 BTC. Every Bitcoin halving has attracted much attention and anticipation. Historical trends have shown that the booming bull market in the cryptocurrency market follows the Bitcoin halving.

On June 15th, COMP launched liquidity mining, taking the lead in the development of the DeFi market. Subsequently, DeFi projects such as Uniswap, YFI, AMPL, Sushiswap, etc. have sprung up on major trading platforms, and the DeFi boom has hit again.

Once the new DeFi project is launched, it will show a strong ability to attract money. Mainstream currencies with such a high consensus, such as Bitcoin and Ethereum, are inevitably sucked by DeFi's enthusiasm.

Despite being briefly attracted by gold, Ethereum has benefited most from the DeFi boom. Most DeFi projects are based on Ethereum issuing tokens. Ethereum is the most common basic asset in liquid mining. It has a high consensus and easy access to transactions. In addition, the frenzy of liquid mining will attract more funds to be locked in Ethereum. In the ecology, this will greatly consolidate the value of Ethereum.

Based on the latest data from Ouke Cloud Chain, the current Ethereum lock-up market value is $19.20B, and the 24-hour transaction volume is $1.69B, an increase of more than 10 times over June.

At eight o'clock in the evening on December 1, the Ethereum 2.0 creation block was confirmed, and the much-anticipated Ethereum 2.0 era officially arrived. The two biggest changes in Ethereum 2.0 are the adoption of a "beacon chain + shard chain" structure, and the transformation of the consensus mechanism from PoW to PoS.

With the change of the consensus mechanism, Ethereum mining will be more favored. The transaction volume on the chain and the computing power of the entire network have nearly doubled from the beginning of the year, maintaining rapid growth. On the last day of the effective pledge period on November 24, more than 300,000 ethers flowed into the deposit contract address, making the deposit progress of the beacon chain rushed from 57% to 100% in one day. At the same time, the price of Ethereum broke through the $600 mark on that day, setting a new high in 29 months, with a single-day increase of 4.9%. It can be seen that the continuous rise of the price of Ethereum has a great relationship with the advancement of Ethereum 2.0. With the value empowerment of the 2.0 era, the price of Ethereum is expected to strengthen further.

According to the latest data of qkl123, the BTC-Grayscale Trust holdings are 570,855 and the ETH-Gray Trust holdings are 2,939,940. Since the first purchase in June, the average daily increase of BTC-Grayscale Trust is about 2970, and the average daily increase of ETH-Grayscale Trust is about 15,310. During the same period, the number of newly mined BTC daily 1000 coins float, and the number of new coins mined daily in Ethereum fluctuates between 15,000 and 25,000.

In response to the negative impact of the epidemic, countries have implemented loose monetary policies. The flooding has accelerated the depreciation of legal currency, and mainstream cryptocurrencies, led by Bitcoin and Ethereum, with natural anti-inflation properties, have entered the field of institutional investors. In addition to gray funds, there are also traditional financial institutions such as MicroStrategy (listed on NASDAQ), Square (payment giant), Stone Ridge Holdings (asset management company), PayPal (cross-border payment platform) and other traditional financial institutions who have announced the purchase of Bitcoin or its combination. Other mainstream currencies. And with the growth of Grayscale Trust Fund and the entry of traditional financial giants, more and more professional investors, wealthy people, and institutions purchase Bitcoin through Grayscale Trust Fund, and even realize arbitrage in the secondary market of US stocks.

The entry of institutional investors, especially the giants of traditional financial institutions, has sent a positive signal to mainstream cryptocurrencies led by Bitcoin, which will greatly enhance investor confidence.

There is no doubt that we are now in a bull market cycle. The bull market does not speak of the top, it is always difficult to predict the future. Below we will use some on-chain indicators to judge the current position, and compare it with the previous bull market to judge the future space. 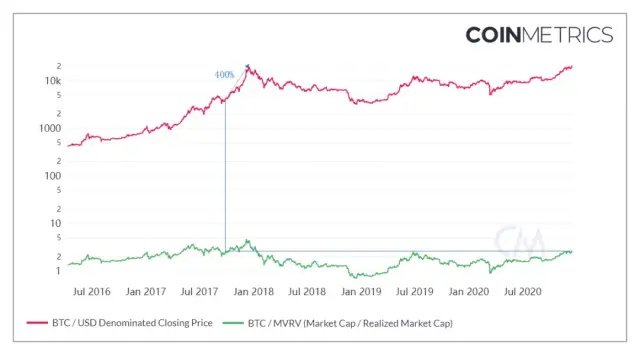 The current reading of the BTC-MVRV indicator is 2.83, which is about 60% of the highest level in 2017. The corresponding Bitcoin price is nearly 4 times away from the 2017 bull market peak.

VWAP is an alternative to the realized price when determining the average price paid by the market for tokens. This indicator can be used to find the top and bottom of the market, and the global VWAP indicates the highest and lowest points of the macro cycle.

The current reading of the BTC-VWAP indicator is 2.57, which is about 58% of the highest level in 2017. The corresponding Bitcoin price is nearly 3.5 times away from the 2017 bull market peak.

RVT is the abbreviation of "Realized Value to Transaction Volume Ratio" and is a derivative form of MVRV ratio. RVT creates a useful signal for the top and bottom of the macro market, and can also be used to determine the stage of the market between these two transition points.

The current reading of the BTC-RVT indicator is 0.0343, which is about 29% of the highest level in 2017. The indicator judges that the current price is still at the bottom and is very optimistic about the future price. The corresponding bitcoin price is nearly 29.9 times the peak of the 2017 bull market. space.

The current reading of the BTC-Mayer Multiple indicator is 1.86, which is about 49% of the highest level in 2017. The corresponding Bitcoin price has nearly 11.5 times the space of the 2017 bull market peak.

A high ratio indicates that the market is overheating and can be used to time the top of the cycle. 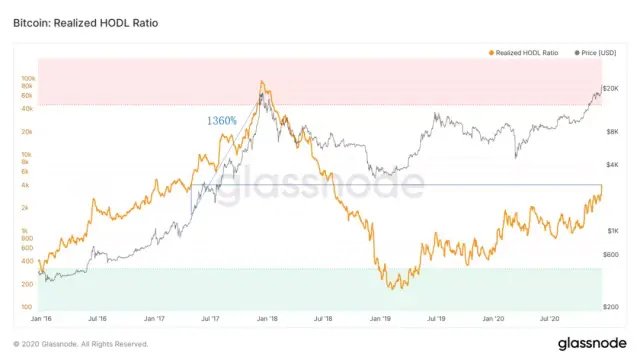 The current reading of the BTC-RHODL indicator is 4,417, which is about 4.6% of the highest level in 2017. The corresponding Bitcoin price is nearly 13.6 times away from the 2017 bull market peak.

"60-day cumulative increase" means that when the market sentiment is frenzied at the end of a bull market, the bubble is serious, and the short-term currency price increase exceeds the speed of newcomers and new funds entering the market, the bull market bubble will burst and the bear market will begin.

The current overbought or oversold situation is measured by the long-term historical trend of the indicator.

The current major chain indicators indicate that the prices of Bitcoin and Ethereum still have a lot of room to rise in the future, but it should also be noted that the current speculative bubble is much smaller than in 2017. In 2021, there is reason to believe that more traditional institutions will deploy mainstream cryptocurrencies led by Bitcoin.