The AKT coin has proven to be remarkably resilient during this recent market dip, and generally has performed exceptionally well over the last couple of months. In this post I aim to explain why this is the case, and highlight some of the reasons why I think Akash is one of the best crypto investments around at the moment. These are just my personal thoughts, and are not financial or investment advice at all. Please do your own research.

To get an idea of how AKT has performed over the last few months, I have highlighted the major price moves that have occurred since Jan 1. 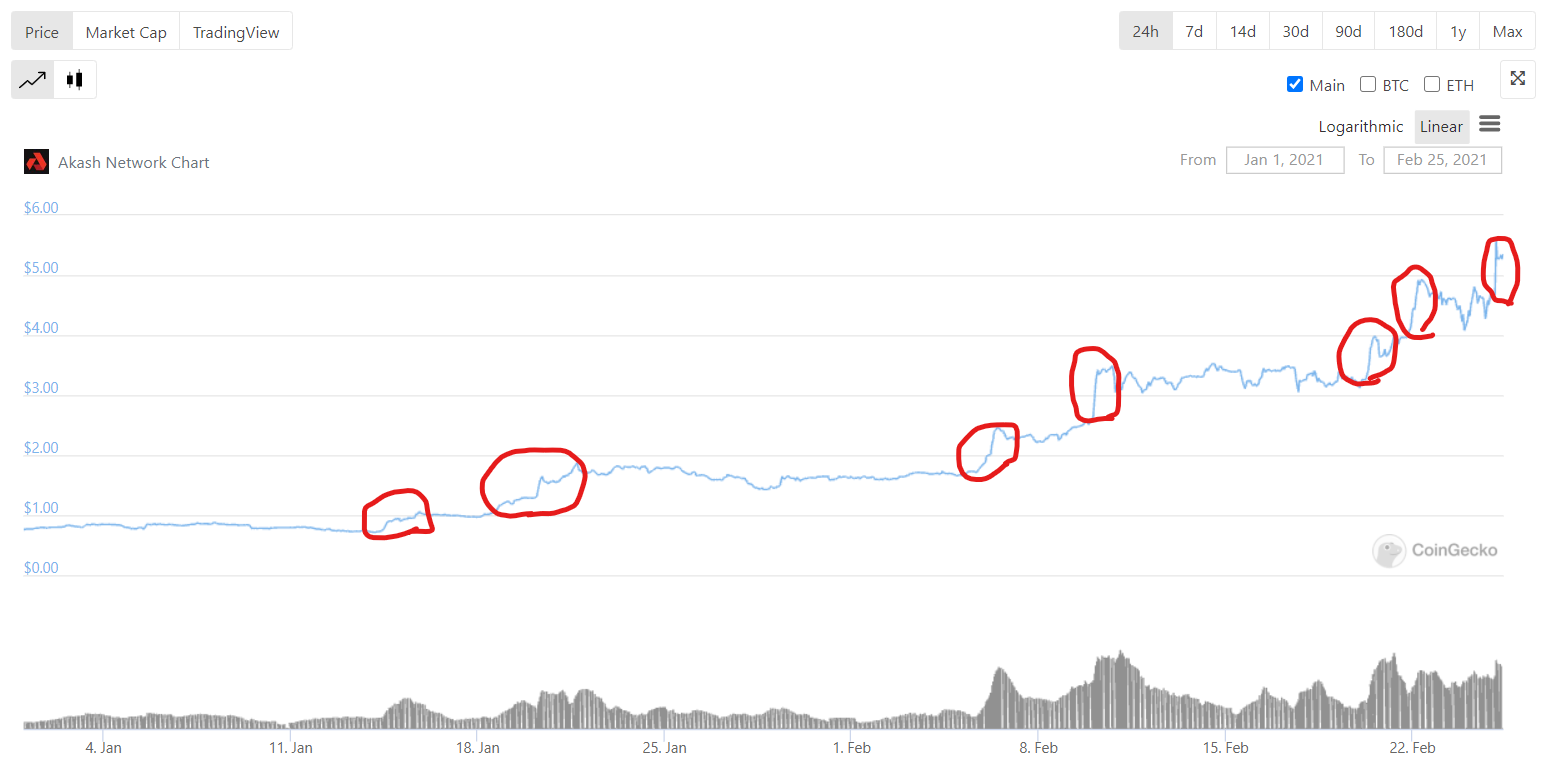 Akash tends to pump, usually by around 20% or so, and then consolidate around the new price level for a period, before the next leg up. As you can see, the legs up are becoming more frequent, and volume is consistently higher than it was just a month ago.

Now some of this price action is driven by the overall market, all crypto's have had a good time of it lately, but there are some unique characteristics to Akash that deserve further mention.

The other thing to note is that once the price does jump, It has not retraced back to the previous levels. The highs are higher, and the new lows are never below the previous highs. I'm no charting expert, but this chart looks like a very clean stairway, without any pullbacks of note. The last week has been more volatile, in line again with overall market conditions, but even so, it has note retraced back to previous levels.

Akash is currently trading between $5.40 and $5.50 at the time of writing this post.

So here are some factors I think are relevant to why Akash is a strong performer, and will continue to outperform over the coming months.

Akash is a POS chain, and has a high inflation rate, currently around 50%. Staking is done by delegating tokens to one (or multiple) of 64 "validators" who sign blocks and maintain the network. The Akash blockchain is a Cosmos tendermint chain, so transactions are fast and cheap, and the POS setup is solid. Validators income from block rewards are shared with their delegators. At any time, you can claim your pending rewards and then delegate them to compound your income and bring your effective APY up to 70 - 80%.

High inflation quite often means pressure on the token price, as holders sell the income for other investments. Akash has not really experienced this, with demand still outstripping supply as seen by the steady price increase. 50% APR on a token that consistently increases in value is an enticing prospect.

Currently around 85% of AKT are staked, leaving only a small portion of the token supply liquid. Unstaking takes 21 days, and tokens being unstaked do not earn any rewards during the process.

Akash tokens are not available on major exchanges. There are currently only 4 lower tier exchanges that offer AKT. Here is a referral link for Bitmax which has the lions share of the liquidity, and is probably the best option in my opinion, however it may not be available in all areas.

Other exchange options are:

I have personally used Bitmax and Bithumb. Bitmax has a much lower withdrawal fee (0.1 AKT) than Bithumb (1 AKT) and also much higher volume. I am not sure of availability in all areas, but have heard US investors have struggled to buy, depending even on where in the US you are. I have heard anecdotally that Bitmart may the the best US option, but can't confirm that from personal experience.

I think the fact that AKT is not easy to come by has actually helped it's price over the last couple months. This is not a pump and dump coin, it is a fundamentals driven, mid-to-long term investment. Those that make the effort to track it down and buy it have generally done their research, and are building a position for the long haul. There isn't the wash trading and speculative cycles that happen on the bigger exchanges, just fundamentals and demand > supply.

On March 8, Akash will have it's transformative moment, from being a blockchain with a potential product being built, to product launch and live network. Akash is building a decentralized cloud computing service. It has run multiple tests, and is ready to deploy. Voting has taken place by AKT holders and validators, and the vote is currently 85% participation rate with 100% yes vote to go ahead with the mainnet 2 launch on March 8. Yes, 85% of holders of AKT have voted in the last few days, an incredible participation rate really. This is just another clue as to how engaged and "invested" in the project Akashians are - not just money invested, but committed.

Once the marketplace is up and running from 8 March, anyone currently using AWS, Google cloud or the other major centralized cloud providers can deploy their software on Akash. They will have capacity offered and the blockchain handles the transactions. Fees for cloud computing are expected to be initially 2X to 3X less than the major cloud companies, with further efficiencies driving costs down even further over time.

To learn more about Mainnet 2, this teaser post on the Akash blog is a great source.

Down the track, once the marketplace has stabilized later in the year, something called take income will be enabled. What this means is that 20% of the cloud computing fees will be paid to AKT stakers, with the remaining going to the compute providers. So, once this happens, AKT holders will not only earn their staking rewards, but they will also earn a share of the system revenue as a separate income. There have been a few different predictions of what this could be, but the main point is that the cloud computing market is currently dominated by AWS (Amazon) and Google, and is predicted to be generating hundreds of billions of dollars in revenue in the coming years. Even a tiny 1% market share for Akash could generate a nice income per token for holders.

Just a few days ago, Cosmos was upgraded to include IBC (Inter blockchain communication). Essentially, this was the delivery of the Cosmos (ATOM) whitepaper, and upgrading to this protocol allows the Cosmos eco-system to become the internet of blockchains. All Cosmos chains (once upgraded) will be able to communicate, share resources and importantly share security. Value transfers across multiple sovereign chains will be a much improved experience.

I know of a few DeFi projects planning to launch DeFi for cosmos chains. With the role out of Mainnet 2, Akash will be one of the first Cosmos chains to upgrade and enable the IBC protocol. In addition, the Akash team have been heavily involved in the stargate upgrade, and will run the IBC relayer.

In addition, other Cosmos projects are building links to Ethereum and other ecosystems, and it is highly likely that AKT tokens will be available on multiple chains and in numerous DeFi protocols over the next few months. This should make the token much more available, and bring it to a much bigger potential audience.

Also, DeFi is a major target as a customer base doe Akash. Much of DeFi, and indeed crypto, runs on AWS or other cloud providers, and this is an obvious centralization risk. We saw recently an AWS outage disrupted a number of both CEX's and DEX's. Akash as a decentralized cloud has failover protocols built in, and is likely to have a more reliable (as well as unstoppable) cloud alternative.

Akash has a few crypto influencers that are fans of the project. A number of the pump events highlighted above in the first chart can be timed around some influential content pieces from crypto people with big audiences.

If we see a 2-3 trillion $$ crypto mcap and if
@akashnet_ is the go-to compute for much, or even just 1/4 of blockchain, it's providing such a fundamentally critical service for truly decentralizing the space, I wouldn't be surprised to see $AKT at $50 or even $100 this year.

In summary, Akash doesn't have a direct competitor in the crypto space. They are on the brink of launching their mainnet with the launch of the DeCloud. The tokens are hard to get, and Akash holders have some of the strongest Diamond hands in crypto. The token pumps on news and influencer attention, and does not slip back much after the pump. Steadily printing higher high's and higher low's, without any significant dips.

AKT seems headed far higher in my opinion. Despite the 3 - 4 X in recent weeks, AKT has only just surpassed $200 million market cap. With such tight supply, and strong hands from the Akashian's, this seems poised to keep rising much higher in the coming weeks.

Please do your own research, don't take my word for it, but don't sleep on AKT or it could be the one that got away.