The Akash DeCloud is just weeks away from its launch. One of the co-founders produced this teaser post to preview that launch. For those that don't know, Akash is building a decentralized alternative to major cloud computing options like AWS and Google cloud. This is important as it allows for computing to run in an "unstoppable" fashion, very relevant to both crypto and blockchain social networks alike. This is another way that blockchains can become uncensorable, with node operators able to launch on the DeCloud, and not have to fear censorship from their centralized service provider. 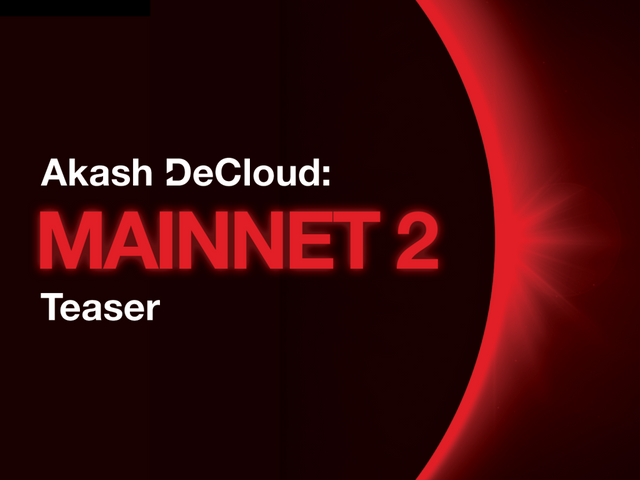 If you are interested in learning more about why I think Akash will become a significant blockchain project worth Billions in the not too distant future, I'd highly recommend reading the linked blog post. Let me pick out a few key highlight.

Currently 2x-3x lower in cost (up to 10x in the future) than the market, our serverless computing platform is compatible with all cloud providers and all applications that run on the cloud, easily integrating with a company’s existing technology stack.

Mainnet 2 is the materialization of Akash DeCloud, our vision for a decentralized cloud computing marketplace.

So first thing to note is that Akash will be cheaper than the major operators, for operators looking for a cloud service, with a goal to be 10 times cheaper as they scale up. This is important as it means you don't have to sacrifice financially to benefit from decentralization, it will actually be significantly beneficial.

The relevance of this to the blockchain space is notable. One example is with Thorchain. Currently, a significant number of node operators are running their nodes on AWS. Thorchain is one of the most decentralized networks, but much of it relies on one central cloud operator. We have seen what can happen, with Parler being the prime example. If the cloud provider decides to (or even conceivable is forced to by legislation) then they can shut you down in no time at all. This is a potential point of failure for the decentralization movement, and one that Akash fixes.

I think it is just a mater of time before much of the systems and software underlying DeFi, and blockchain in general, run on Akash, or some future alternative (none exist at the moment as far as I know). I can't wait to see the first HIVE witness running on Akash, I'm even contemplating learning how to run a witness node and doing it myself.

So much goodness is coming to the cosmos blockchain eco-system, which akash is a part of. The "Inter-Blockchain Communications" (IBC) launch is coming, which will enable cross chain links between the Cosmos chains.

Mainnet 2 provides full compatibility with Cosmos SDK’s IBC-enabled Stargate upgrade out-of-the-box. The implementation and adoption of IBC within the Cosmos ecosystem will enable more projects to exchange value across the Cosmos Hub, and participate in Akash's decentralized marketplace.

With IBC, Akash reduces the barrier to adoption by allowing other currencies to access and transact within the cloud compute marketplace.

One thing that is important to note is that the Akash team were heavily involved in developing the IBC. This article shows the links between the Akash team and the development of the IBC protocol. In it is this quote I'll share to highlight some of the benefits to Akash from IBC:

Through the work with IBC, Akash will be one of the first companies to implement and integrate IBC. With IBC, Akash DeCloud’s distinct and differentiating features like multi-currency settlement and the ability to pay for cloud compute using stablecoins (such as Kava’s USDX) will be coming much sooner, rather than later.

In the future, decentralized organizations (DAOs) will be able to purchase cloud compute programmatically on Akash DeCloud, over IBC, instead of relying on centralized exchanges or centralized cloud providers.

The actual launch of Mainnet 2 and the opening of the DeCloud depends on a few things:

If testing is deemed successful and the initial signaling proposal passes, the earliest date the secondary upgrade proposal can pass will be March 3rd, 2021.

If you only read one article, I recommend this one:

Going to tag all the LeoFinance peeps that I know of that are invested in Akash:
@michaelb, @funtraveller, @cryptovios, @revise.leo
If you would like to be added to this list, (want to follow for tags on future posts) or removed from it (don't tag me!) just let me know.

Thanks for reading, exciting times ahead.

As usual the contents of this post ARE NOT financial advice. DYOR.