The benefits of Asymmetric Liquidity Pooling on Thorchain.

This morning I have opened up a position in the RUNE/USDT LP on Bepswap. Up until the last few days, I never imagined I would pool RUNE with USDT, fearing much Impermanent Loss. However, my thinking has shifted significantly and in this post, I'll detail why. 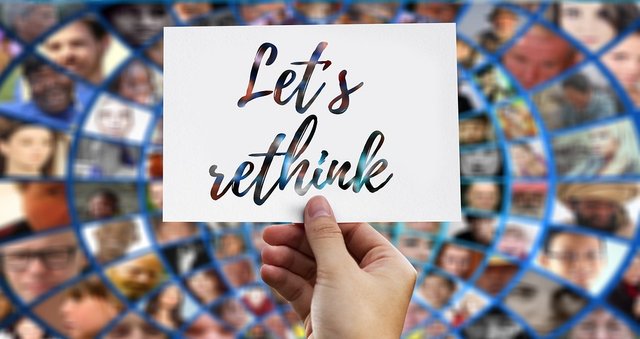 Many interested in how Thorchain LP's have been performing may have seen this post by @bagofincome, and subsequent post by a Thorchain community member on Twitter, Acrobatica. In it, the BOI showed his stats in a USDT pool, and how much IL he was suffering. This kind of reinforced in my mind that RUNE/USDT was not a pool I wanted to be in. However, the advice given was sound, and made sense. I'd highly recommend reviewing this tweet thread before adding to a RUNE LP.

Here is how the BOI's pool position looked at the time, measured in RUNE, with this image sourced from BagofIncomes post linked above:

I'd be fascinated to hear back from @bagofincome as to if he made any changes to the LP position, and how it has performed since that post.

One great feature of Bepswap, that may be unfamiliar to people who's main LP experience is Uniswap, is Asymmetric pooling. What that means is that the UI allows you to add to a pool only the non-RUNE asset, and the pool will balance it out, effectively selling half of the asset for RUNE. This is a great facility for people that want to earn from their bags, but don't have the matching RUNE in their wallet. Any price slippage depends on the size of the stake relative to the pool depth.

The other benefit to this is that it changes the unit of measurement for Impermanent Loss, which changes the psychology of the LP investment. If BOI didn't put his RUNE into the pool in equal measure with USDT, but pooled that same total value asynchronously, his "LP versus HODL" metric would show positive. Same dollar value of assets put in ($293.70) but measured as all USDT instead of half RUNE half USDT. The same USD value added, the same USD value when he took these snapshots, but a massively different "LP versus HODL" performance.

Most IL is an illusion, depending on what assets you put in.

In this screenshot, obviously from someone that has Asymmetrically added to the pool with all USDT, you can see that they have made back all their initial USDT investment, plus gained a bunch of "free" RUNE. Now, I dare say that this person would have pooled early in the life of this pool (a few months I think from memory) when the pool was incentivized a bit. But even so, the have, in a low risk way, doubled their money, or another way of looking at it is they have earned a whole bunch of RUNE by providing USDT liquidity.

Important to keep in mind that if this person had pooled assets 50/50 (half RUNE half USDT) they would be showing a significant IL. The same USD value in, the same USD value at this point (100% gain) but an IL.

IL is an illusion, it is FUD. Sometimes its real, but often it is just down to the unit of measurement.

What have I done?

I freed up some funds from other places, and transferred them to my Ledger in Bep2 version. I then added them Asymmetric to the USDT/RUNE pool. 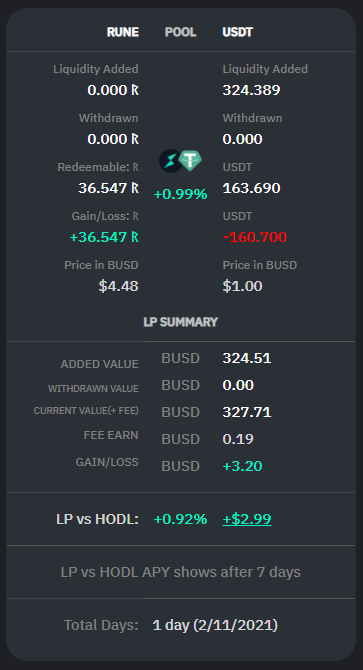 And here is the breakdown of the "LP versus HODL" numbers: 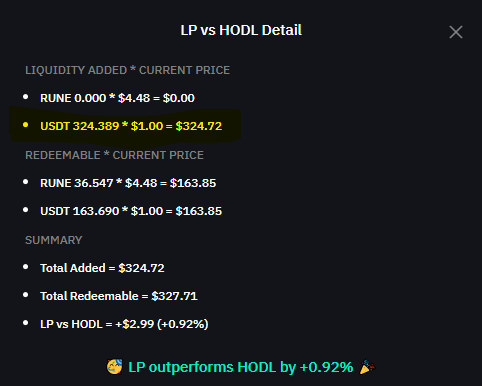 I'm looking to build up the position a bit, and will keep you posted. As you can see, I'm already in the green, with RUNE having moved up a bit in the few hours since I opened the position. As I have stated before, "LP versus HODL" would be negative in this metric if I had swapped half of the Tether into RUNE, and pooled it symmetrically.

LP versus HODL is FUD.

I hope you find this post helpful. The moral of the story is that if you already have RUNE, I'd look for a highly co-related asset to pool with. Or don't pool. Or set a target price before opening your long term pool position, once multichain launches fully (@khaleelkazi). If you want to get in, don't buy RUNE, just add your "non-RUNE' asset to the pool, and watch what happens.

All of this is based on an assumption of mine that RUNE will outperform most other assets in the medium term. I could be wrong in that assumption. 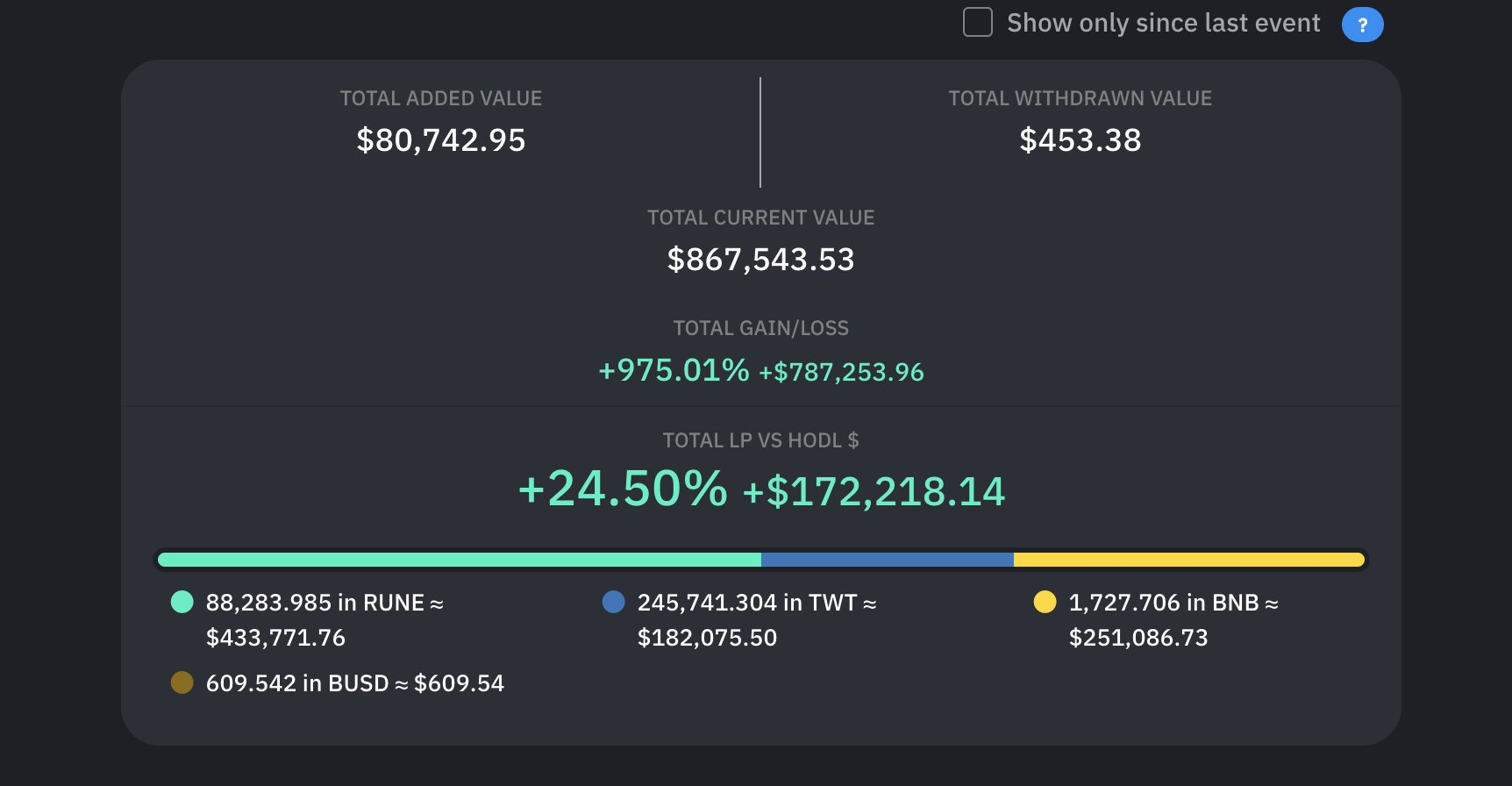