Introducing LeoFinance to the Comdex community.

Leofinance is a user generated content platform, and community on the Hive blockchain. Hive is primarily a Web 3, social media blockchain, and has been around for over 5 years. Originally, the community was on the STEEM blockchain, but a couple of years ago Justin Sun tried to take over STEEM. The community was not happy with the direction he wanted to go, so it forked the chain and created the Hive chain. The vast majority of the community left STEEM and have built Hive as a truly community built, highly decentralized blockchain. 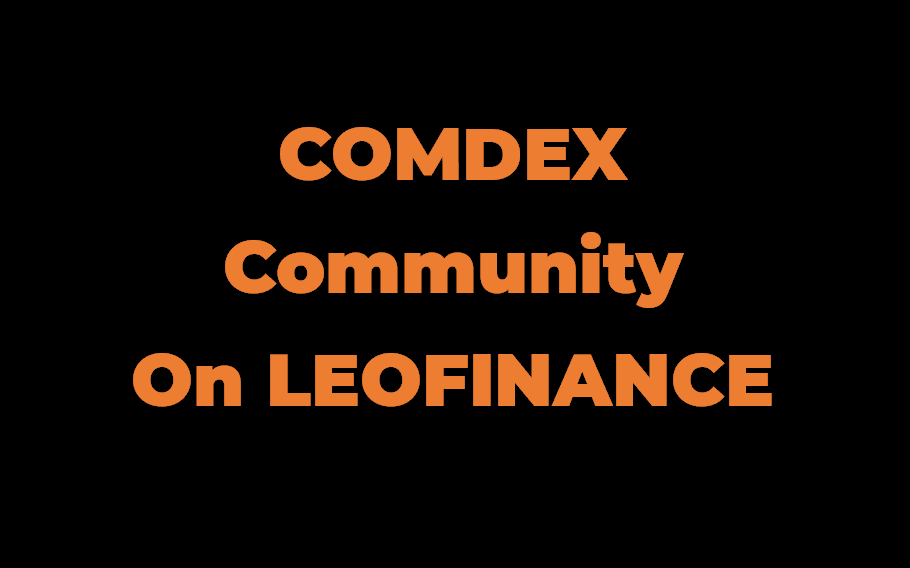 You can find the new Comdex Community Page and take a look for yourself. There is a little tidying up to do, with a bigger logo and rearrange the links, but it is up and running to become the home page for Comdex content.

The Leofinance community is a dedicated community on HIVE, sharing content about all things crypto and finance. The community has over 600 active users that specifically use the Leofinance front end, but a much bigger reach beyond. Content posted on Leofinance is posted to the Hive blockchain, and will also be available across a range of other front ends, like Peakd.

The Leofinance community are passionate about crypto, and are looking for new projects to invest in. The team behind Leofinance have launched their own DeFi apps, with CubFinance on Binance Smart Chain and Polycub on Polygon Matic. Hive is the home base for Leo, but certainly not its limits.

What does all this have to do with Comdex?

Leofinance has just launched it's latest feature, being Community Pages. A community page is simply a hub for content based on a specific topic. Now, rather excitingly, just the third community page to be set up is for Comdex. We had communities for Thorchain, and Splinterlands (a Hive based play2earn game that is one of the largest blockchain games). And now Comdex is the third page.

There are already some passionate Comdex fans that have been posting on Leo. @carbonzerozone is a validator for Comdex, and posts from this account as well as @coinlogic.online. @nulledgh0st is also part of a Comdex validator team, (Whispernode) and while he has been quiet lately, he will be back to contribute and help moderate this new community. I've also produced a number of Comdex related posts, and the majority of content I create is focused on various projects in the Cosmos.

Comdex is a small project currently, but I pushed for it to be added as a community early on for a few reasons.

Joining Leofinance is easy. So easy in fact that it does not even feel like a Web 3 experience. But it is. Simply click "Get started" in the top right corner of the home page. There are three signup options, creating a HIVE account directly, or signing up via Twitter or Facebook. These will create a new HIVE account on the back end, without any initial hassle of keys and so on. Just use these options to sign in, and away you go.

It is always recommended that once familiar with how it all works, you download your keys and take full ownership of your account. Hive has plain, user readable wallet names. Rather than an Oxc123blahblahblah or comdex123xyzabcblahblahblah wallet address, your user name is your wallet. So for me, @jk6276 is my Hive wallet, and access to every dApp built on HIVE. With the Twitter and Facebook account creation, Leofinance has made onboarding a breeze, but like everything in crypto, "Not your keys, not your crypto". In this case, it can also be seen as "not your keys, not your content".

Once you sign up, drop a message to myself, @carbonzerozone or @whispernode. Simply reply to this post, or one of their recent posts, so we know you are here from the Comdex community. We will be happy to help you learn your way around Leofinance. Bookmark the Comdex community page to keep up to date.

Content posted to Hive from the Leofinance front end can earn rewards. If the community like the post, they will use their stake to upvote it. This is the primary method of distributing inflation on Hive. Users with stake vote on content. Rewards are allocated from inflation based on the weight of stake upvoting. Once 7 days pass, those rewards are payed out, half back to the voters (we call that curation) and half to the content creator. You can earn HIVE, a token called HBD (which is the Hive chains native stableish coin) and if you post from Leo front end, LEO tokens as well.

Earning rewards should be seen initially as a side benefit. Yes it is possible, but it can take a while to build up an audience and gain regular support. Community pages can help speed up the process, as you content will be more easily found by people with some stake that are on the look out for Comdex specific content. For an awesomely detailed guide to Leo and Hive, check this post by @libertycrypto27.

What are you waiting for?

I know there are Comdex brand ambassadors that are incentivized to spread the word about Comdex. I know their are validators that are also working to raise awareness. Everyone in crypto preaches about decentralization. Why not walk the walk, and share your content on a decentralized, Web 3 platform like Leofinance, rather than centralized Web 2 Medium. How do we expect Blockchain to take over if we keep posting about it on centralized platforms. Leofinance, along with many other Hive projects, is Web 3 in action, from before the term Web 3 was even a thing.

Are you ready to walk the walk?

P.S. Joining is completely free. This is not a sales pitch, its an invitation.

For full disclosure, the Comdex team is not behind this project, and has not collaborated or endorsed it. We would love to invite the team to review this community initiative, and would welcome the team to Leo with open arms.

This is awesome! Thanks for getting the community setup! I think the Comdex team is going to love it!

Thanks mate. Would love to bring some more validators and community members here. Leo is a great target market for projects to promote themselves to.

It's such a shame it gets over looked so much, just because it's not in this or that ecosystem. Trying to break the tribalism!

Great job setting up the comdex community and hope they come to see their community.

Hopefully we will see some new faces here.

Great initiative! I am happy to already be ahead of the curve on this one. I am excited to see what develops (both on COMDEX and on this community page).

Nice. Building a position while the market is crappy should put us in a good position down the track. Wish the cAsset platform was up and running, commodities holding up well while everything else is crashing.

Agreed. The limited supply of COMDEX plus the upward potential has 20 cent COMDEX looking like a really sweet deal. It would be nice to be staking some synthetic gold right now though. Soon.

Agreed. The limited supply of COMDEX plus the upward potential has 20 cent COMDEX looking like a really sweet deal. It would be nice to be staking some synthetic gold right now though. Soon.

It's great that more communities are opening. Now it is easier to learn more about Comdex. Thank you and let me give it a visit :)

It is an interesting little project, that could do big things. As always, not financial advice.

Thanks for dropping by.

Thank you and yes, noted the disclaimer hehe. Cheers and all the best!

Really excited for this to kick off! Thanks for your hard work in helping us get this setup @jk6276 - we really appreciate it.

I'll mainly be posting from this account, but will also be sharing from the @WhisperNode account - please be sure to follow that one as well. We'll push updates from there occasionally to help keep our awesome new Hive family informed about what's going on in the Cosmos ;)

Can't wait to have you back posting on LEO, your content and experience working with a validator team will really add to the Leo knowledge base.

Excited to be back! I've picked up an immense amount of knowledge about the Cosmos ecosystem in these past 8 months, and the projects I'm currently collaborating on are going to (hopefully) help change the face of the Cosmos as we know it.

Decentralization is my core focus. Some big news coming soon!

Can't wait to read all about your big news here on Leofinance.

Hi @jk6276 and thanks for mentioning my guide and calling it awesomely detailed :)
I wrote that guide to help new users and I hope it will be useful so thanks again.

I think yours is a great initiative because onboarding is an important goal for Hive and Leofinance.

Thanks mate, I was searching for a good guide to link, and yours stood out. It will be interesting to see if we can bring people over from Comdex, time will tell.

I think Comdex will succeed on Leofinance. The presence it has on Leo is great for investing !

Leo is a great target market for projects looking to improve their profile.

Hopefully we will see some new faces around.

This is exactly what we must replicate. Comdex + LEO is like a match made in heaven. Cosmos is full of potential projects to onboard into LEO ecosystem. We may see similar interest from blockchain gaming communities and guilds.
!PIZZA

Plenty of Lions here looking for an up and coming project to accumulate during the bear. Plenty have seen bear markets before and know that these times are when positions are built for the future.

Excited to see Comdex come on board! If we can co-sponsor a contest or help them get some traction here and get some of their users creating content to spread the word about their project and CMDX token, reach out!

I'll definitely put the feelers out and see if there is interest. Community created content is powerful for smaller projects to help get their brand out there.

Thanks for making this happen, and putting up with me hassling you.

Hopefully we see some new faces around soon.

Comdex community! Yo come onboard

Lets hope they can see the benefits.

Great job pushing for this JK! And because you convinced a few Leofinance users who are also Comdex validators to be moderators of the new community.

It will become a great place to research Comdex, and Leo community is a very underrated target market for projects to promote to.

Lets see if it works.