The Hitchhikers Guide to the Cosmos

Far out in the uncharted backwaters of the unfashionable end of the broader crypto marketplace lies a decent sized, but somewhat underrated project called ATOM.

Orbiting this at a variety of distances is an ever growing collection of blockchains, which have implemented various adaptations of the ATOM chains foundations, the Cosmos SDK. These chains are held together, orbiting around the Cosmos (ATOM) chain by a remarkable gravitational effect called the "Inter-Blockchain Communications Protocol" (IBC). IBC is like the Babel fish, from the Hitchhikers guide to the galaxy, an incredible tool that allows all these unique, and separate chains to be able to communicate with each other.

The Cosmos can be a confusing place at times, with the very term Cosmos itself used in a number of different ways, which can cause confusion for travelers passing by this sector of the crypto galaxy. The following post is an attempt to unravel the mysteries of the Cosmos for the casual observer, or curious bystander. 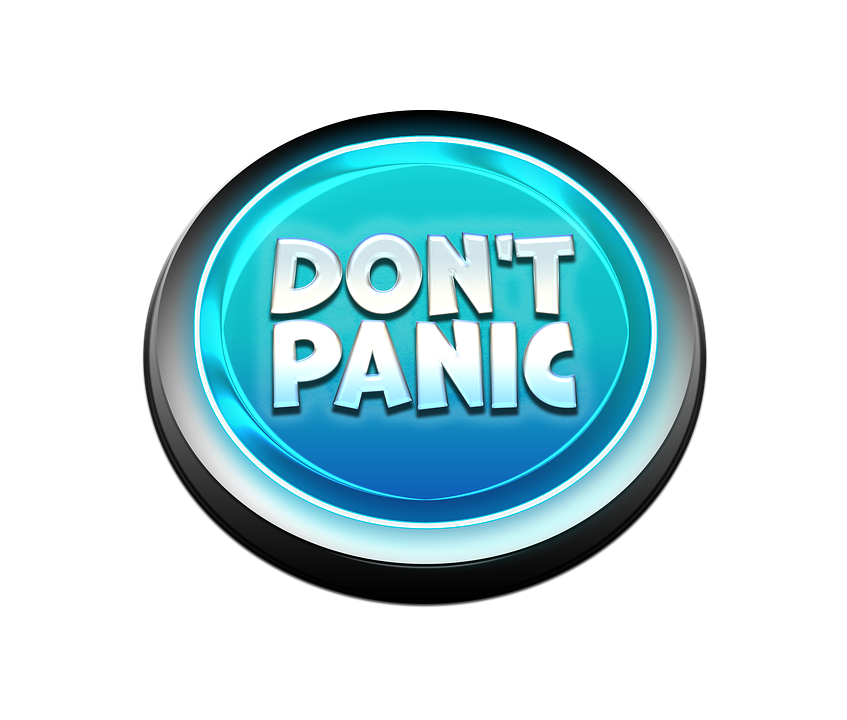 The ATOM token lives on the Cosmos Hub chain. This is one of the primary projects in the IBC eco-system, has been around for years and is widely available on most Centralized exchanges, a growing number of Dex's, as well as in bridged form in other eco-systems like Binance Smart Chain. For most, it is the entry point into the broader Cosmos eco-system. The Cosmos chain is sometimes also referred to as "Gaia". To me, I consider it as the "ATOM" chain.

The chain is one of the first implementations of the Cosmos SDK (Cosmos Software Development Kit), which I'll cover in a minute. The chain itself seems to have a bit of an identity problem at the moment, with no clear direction, beyond a generally accepted push to role out "shared security". This will be an implementation that allows other chains to "rent" or become "consumer chains" to borrow the security of ATOM. These "Consumer chains" will use the Cosmos chains validators and pay with their token. Thus delegating staked ATOM's may end up producing multiple different token rewards as the ATOM validator set take care of security (or a portion of the security) for client chains.

Aside from this, a number of attempts to add a use case to ATOM have been met with conflict and division. Recently, a push by some to add CosmWasm (the Cosmos smart contract module) to the ATOM chain met with fierce resistance from some. Gravity Dex was an unsuccessful attempt at adding a Dex on the Hub. Eventually, this project was moved to its own chain, and renamed to Crescent. With Osmosis launching earlier, and capturing the first mover advantage for IBC Dex status, Crescent remains niche for now. Gravity Bridge likewise proved unsuccessful at adding a use case to the Hub. It's development was funded largely by ATOM and grants from the Interchain Foundation, but in a move seen by many as treacherous and underhanded, it ended up launching as a separate chain also.

It now appears that shared security is the big hope for adding a utility to the Cosmos Hub. 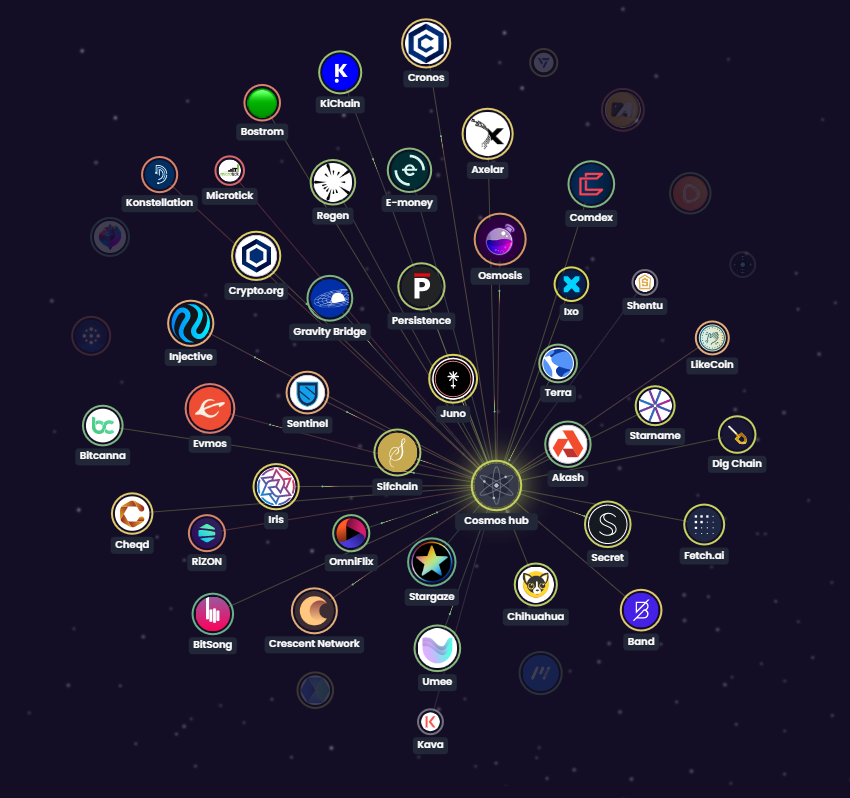 Next term to understand is "Cosmos SDK". This is simply the open source toolkit that anyone can use to launch their own Cosmos style chain. With a vision for modular, app-specific blockchains, rather than a "one chain with many apps" approach that other eco-systems adopt (Ethereum, Solana, Cardano for example).

The above quote explains it better than I can. To learn more about the Cosmos SDK, the docs are a good place to start.

As can be seen from the above visualization, Tendermint Core (a separate but related protocol) handles the Consensus and Networking architecture of any Cosmos chain, and the Cosmos SDK is the framework for the State-machine or Application built on the chain.

So, think of the "Cosmos SDK" as the toolkit for building a blockchain.

The next concept, which also uses the Cosmos moniker, is the broader Cosmos eco-system. This is a whole collection of separate blockchains, each a layer 1 chain with their own validator set and token model. This is where the "App-specific" chain approach can be seen in action. The confusion here lies in how broad a definition you like to consider.

Many see the "Cosmos eco-system" covering all the IBC enabled chains. This means that chains like Binance chain (the beacon chain, not BSC) Thorchain and so on (which are built with the Cosmos SDK, but not IBC enabled) are excluded. To really stretch the definition, some even include Polygon as it is built with a modified version of Tendermint, however until it adds IBC capabilities, most don't connect that tenuous link.

There are numerous projects of note in the eco-system, with more announced to be coming in time. Osmosis, Juno and Evmos, plus of course Atom itself, are some of the big ones. Then we have projects like Comdex, Akash and DVPN to name just a few more. Up coming projects include the recently announced migration of dYdX, from an ETH layer 2, onto a purpose built Cosmos SDK chain.

While on the surface, the benefits for ATOM are quite limited from all this activity orbiting the Hub, the network effects are profound, and growing all the time. Many of these chains still see ATOM as the primary "store of value" in the eco-system, and are actively incorporating ATOM utility into their projects. In addition, holding and staking ATOM has been a primary requirement for numerous airdrops as new chains have launched in the Cosmos.

A great example of a project in the Cosmos Eco-system is Comdex. Comdex are building a range of DeFi products, with a focus on a new Stable-coin and a synthetic commodities platform, amongst other applications. This sort of addition adds use cases for ATOM, as it will be a key collateral token useable within the Harbor protocol (stablecoin), and the cAsset platform, as well as in the Commodo lending and borrowing platform. This is just one chain, adding multiple use cases for ATOM. Many other chains are doing likewise.

What does the future hold? 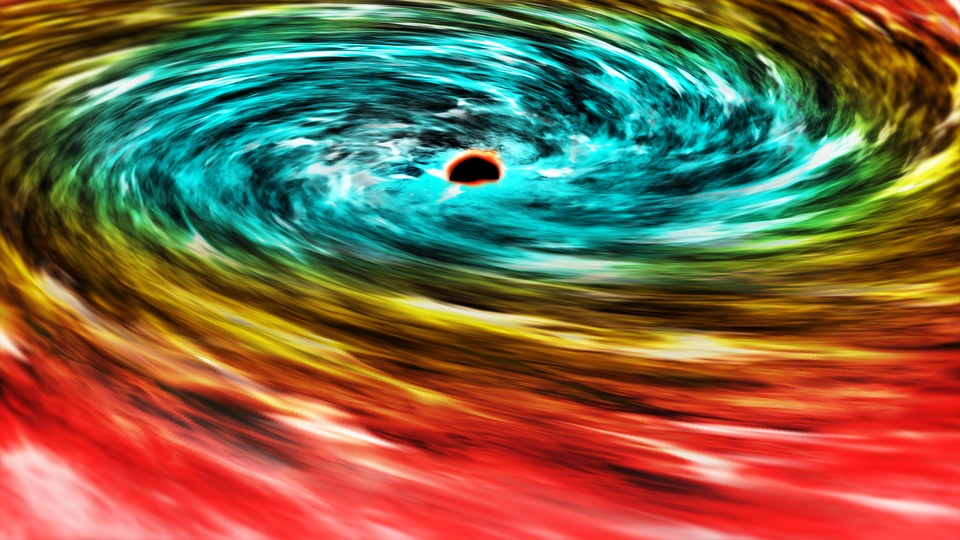 Obviously the title, intro and first image used in this post were inspired by "The Hitchhikers Guide to the Galaxy" by Douglas Adams.

"So long, and thanks for all the fish."

As a reminder, here on Leofinance you can find a dedicated hub for Comdex content and information. We would love to see more contributors come on board, and bring your own perspectives to the growing Leo community. Ask myself, or @carbonzerozone for more information.

I just reblogged. The Cosmos hub is the centre of it all, that's so incredible. I have checked my Kelper wallet, all my tokens are low. It's lost a big amount of value !

Yeah, the market has not been kind. I checked my non-cosmos tokens, and they are all down a lot also. But yes, most Cosmos assets have been hit hard, especially since the LUNA/UST debacle, which hurt Osmosis a lot and therefore many other coins with OSMO as their main trading pair.

Think long term, and focus on quality is my best suggestions.

Do they created a Plat2Earn specific blockchain also?

There are a couple of projects coming - "Soon" of course. One is called Strangeclan, which is an NFT game being built by Passage 3D. They are (or at least were, I have not seen any updates for a while) building a metaverse for the chihuahua chain ($HUAHUA).

Another one to watch for, that I also have not heard much from for a while, is a Minecraft based economy chain. Basically a DAO owned Minecraft server, with a built in token economy and such.

I guess the market drop has slowed/stalled progress on some of these things, not sure.

There is another project that was in the plans, but I think it is on hold or abandoned. It was being built by the team that became demonized during the whole "JUNO Whale" saga. Not sure they are going ahead with their planned gaming chain.

I'll keep an eye out for any news.

That great, I guess more activity will pop up once bear is over.

For me, when I think of the Cosmos eco-system, you could more accurately describe it as the IBC eco-system.

I think that's how it should be regarded. I believe it's a stronger connection between the blockchains of the Cosmos ecosystem than between the EVM chains, which use non-standard (and thus potentially more vulnerable) bridges to communicate with each other. But I've seen enough times people understand by Cosmos ecosystem Cosmos chain. Usually, people not familiar with Cosmos make this confusion.

With the recent announcement about dYdX moving, I saw so many people saying things like "why would they build on Cosmos, not much is happening there" thinking of ATOM.

IBC eco-system makes more sense to me. There are Cosmos SDK chains that are not connected, and potentially soon non-Cosmos chains that will be a part of it. Be interesting to see what happens when Polkadot connects to IBC.

Used Cosmos for the first time yesterday and was thoroughly enjoying it. Thanks for sharing this guide!

Nice. It is fast and cheap to use, and relatively easy to shift funds around.

ATOM on Thorchain will make things more accessible, without needing to start with a Cex.

We already have so many chains I get dizzy just opening Coingecko to see top list.
I believe we will have oversaturation eventually and keep only best and developing chains.

It will become survival of the fittest. Even within the Cosmos, there are multiple competing chains. The cream will rise to the top over time.

Competition is a good thing, it drives innovation.

Fantastic article once again mate! Keep it up.