I'm Taking My Bitcoin Off BlockFi. Here's Why! 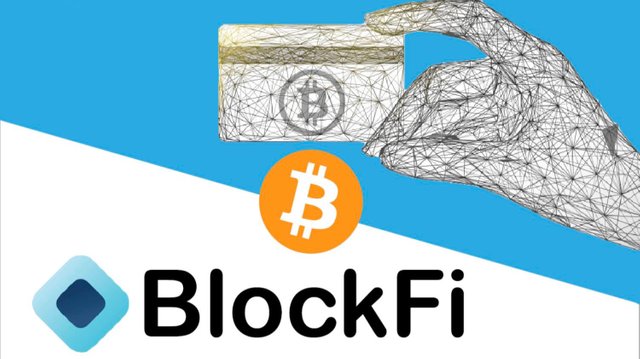 We had a good run, but unfortunately it has come to an end. If you are not aware of what I'm talking about; BlockFi just announced that starting April 1st they will dramatically be reducing their interest rates. This decision has caused quite an uproar in the bitcoin lending community and has led many to withdraw all their funds from the BlockFi service. While the smaller lender might not notice any changes at all to their lending; this is a move that will greatly affect the larger lenders, including me. And this has led many to consider using other services, or if lending out your precious bitcoin for a high-risk passive income is even worth it at all. But what about me? Will I stop using BlockFi altogether?!

Let's dig into this topic more and discuss everything it has to offer.

If you are unaware; making a passive income with my bitcoin is one of my favorite things to do and for the last few years BlockFi was my favorite place to do it. The recent price surge of bitcoin has been very kind to me and has allowed me to earn more than $500 worth in Bitcoin monthly, and then you can add all the other coins that I lend out as well. While not huge; this venture has become a very nice money making machine for me.

As I mentioned before; out of all the bitcoin lending platforms out there, BlockFi was my favorite of the bunch. I really liked the fact that the interest rates had remained incredibly stable. It was something that I could depend on. Even more than that; I liked that BlockFi didn't have their own token; compared to other lending services like Celsius, Nexo, Voyager and the list goes on. In my opinion this always made me feel more confident in the business plan that BlockFi was operating under. I also was a big fan that you could trade between coins on their service as well. I would often repost USDC or some other stable coin on to their service and leave it sit there. All the while gaining a great 8.6% interest. Then when a nice dip would come for bitcoin or ethereum; that is when I would trade those assets into my desired coins. I must confess that even though there was quite a large market spread on each trade; the convenience of the transaction was so convenient that I was willing to pay it.

But all of that has changed.

A lot of peculiar things have been happening with BlockFi recently, and with each passing event my confidence in the company has lowered as well. I was once able to convince myself that it was just a matter of circumstances, but I am from the countryside and in the countryside there is a famous phrase. It looks like a pig, smells like a pig, sounds like a pig; it's a pig.

This all began when the Grayscale bitcoin cost, (GBTC) went negative; meaning it is actually trading at a discount. While perhaps the spot purchase price of bitcoin might be around $55,000; you could theoretically buy GBTC for around 10% less than that. But why is this a problem? One would assume that this is only a problem for Grayscale and not for BlockFi.

Well let me explain that to you. One of the ways in the past that BlockFi has been able to pay very generous fees was that they didn't rely only on lending out the users funds to people wanting loans. They were in fact also participating in arbitrage buying on Grayscale. When there was a premium on Grayscale's price, this allowed BlockFi to profit heavily from these maneuvers. But now that that premium has disappeared and has become a large discount; it has caused rumors to pop up claiming that BlockFi is perhaps heavily underwater. This problem is compounded even further when you consider the fact that BlockFi spent $379 million dollars to acquire a 5% stake in Grayscale. This should have caused a sense of concern to pop into your mind already.

But that is not where the concern stops. After the Grayscale price began selling for a discount other peculiar things began happening as well. Less than a month ago BlockFi halted all new signups to their service for a several hour period. What was happening during this time period? Well, BlockFi claims that they were attacked by countless abusive signups. These signups were fake people, or were using racist terms, or bad language. They claim it was an attack to hurt the image of BlockFi and that they needed to halt all signups until this issue could be fixed; but that all funds were safe and everything would run normally for existing users. This could be very well be true, and I must admit that I actually probably lean towards believing the story. But the problem is that once bad news after bad news is released to the public about the company; that companies' image will take a hit. For a financial lending company that takes custody over your bitcoin; that confidence is everything.

Then BlockFi had a new fundraising round that resulted in them gathering about $300 million into their company. While this is a very normal thing for a new startup company, and a company that has the type of hype that BlockFi has been receiving. The doubt comes in after the previous 2 bad circumstances that I just discussed had happened and also the speed of their fundraising. Usually they announce their fundraising in advance, and it is a little more spread out. But this new funding news came very quick after another recent fundraising event, and also very soon after the Grayscale premium went negative. Is it all coincidence? It could be, or it may not be. But it is quite worrying that a new funding would be announced at the exact same time that there are several rumors of BlockFi being very underwater at the moment.

And finally we have the last nail in the coffin for me. Just this week BlockFi announced that they are drastically reducing their interest rewards for their users. While this is mostly targeted towards the larger users, and the smaller users probably won't notice any change at all. 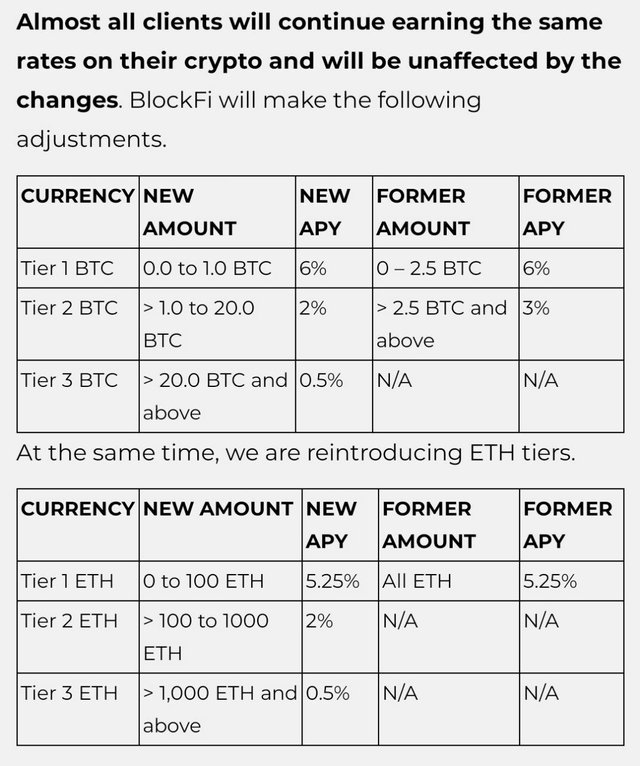 They want to keep the same interest rewards for the smaller users for two very important reasons. The first is so they can advertise the "amazing" high-rates that you can earn on BlockFi. And the other is that because these tier people can't lend out as much; it won't cost BlockFi as much to pay the rates. But for the people who lend out quite a significant amount, which does include me. This is the tier that has drastically been reduced. These are tiers that are very costly for BlockFi to payout previously. Just look at the new rates in the above picture.

While it was previously in my opinion a no-brainer decision to lend out your bitcoin on BlockFi for a passive income; especially if you have a significant sized portfolio. Now the interest has become so low that I personally don't believe it would be risk it to lend anything that would be put you into the lending tier of 2 or 3. You wouldn't want to risk your previous bitcoin for such a low rate.

Then taking into account that withdrawals from BlockFi can be quite a pain at times. They advertise that withdrawals are as quick as 24 hours, but I have seen people complain about times being much worse, especially if you are withdrawing a significant amount.

Maybe at the end of the day BlockFi did in fact have too much capital that they had to pay interest for; and it became too costly after the GBTC premium went negative. Maybe they actually wanted the larger lenders to leave the service. It is possible.

There are other services out there that will benefit greatly from this; and their rates haven't changed much. I'm thinking of services like Celsius, LEDN, Voyager and more. Not only do they offer a higher interest rate, but for places like Celsius; the withdrawals are much better. You can withdraw almost anytime you want.

But what about me?

I have always had a feeling that these interest rates for Bitcoin may not last forever. This is why I have been really trying hard to accumulate as much as possible. But with the amount that I lend on BlockFi; much more than $100,000; the risk no longer is worth the reward for me. This means that I will be taking a large majority of my BTC off of BlockFi. The real question is should I put it into cold storage, or continue lending with a different company. I will admit that this whole BlockFi situation has put somewhat of a dampen on my confidence in the lending market. My strategy will be to do this. Once March ends I will be taking a large amount of my BTC off of BlockFi. I'm waiting to do this because I already used my free withdrawal this month, and I'm too stingy to pay for the enormous withdrawal fees. I will send a decent amount of that BTC to my cold storage for some stress free living. I will then send a large amount of my BlockFi BTC to Celsius. While I still am not a fan of them having their own town, I do like that they only have a very small percentage of their business in the arbitrage business. From everything I have watched; they have tried to build their business with a sound business plan. For international users their BTC rate may differ, but for USA users it is 6.2%, even higher than BlockFi. I will also begin experimenting with Voyager as well. They have a higher BTC rate than both Celsius and BlockFi, but I must admit they are a bit of an unknown to me still. I still am wanting to take advantage of the high bitcoin interest rates that are still available out there. Perhaps in the future those other companies will follow suit and lower rates just like bitcoin did. But until that day comes; there is a lot of money to be made.

But I'm not quitting BlockFi all together yet. I will still keep a portion of my bitcoin on the service. But it will be well within the tier 1 level. (Less than 1 BTC) In the future I may continue to use it for Stable coins, but I haven't completely decided. For me right now, I am taking the wait and see approach. I have a feeling that they were focusing too much on incredibly fast growth, rather than having a sound business plan and now they are having to put one in place. It is concerning.

How about you!? How are you feeling about BlockFi at the moment? Are you going to withdraw your funds? Which lending service do you like the most!?