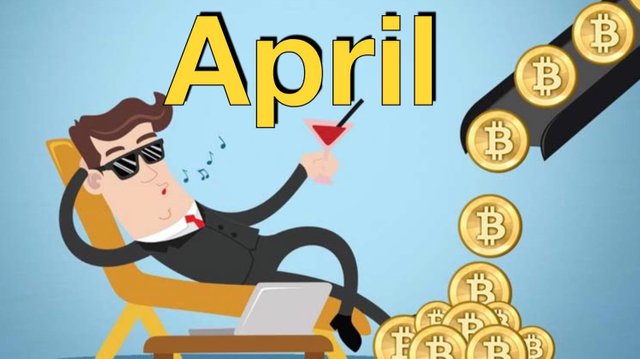 It's hard to believe but another month has come and gone. April has come to a close and that means it is once again my favorite time of the month. At the end of the month I calculate all of the earnings that I have made in cryptocurrency for the month. This income comes from a variety of sources and I often will explain my thinking and strategy with each area. I do this as a way to track my own progress, and also to help motivate myself to continue my journey towards achieving full financial freedom. I hope that it will also motivate others who read this post to also begin their journey towards financial freedom as well. After all, if I am able to do it; then anyone can.

When the year began I set a personal goal to achieve a level of $2,000 per month in cryptocurrency income. Already in March I was just short of being halfway towards achieving my goal. April proved to be another great month as well. But in many ways, April was a challenging month for me as well. A lot of factors dealing with how I was earning income had changed and therefore I also needed to adjust my strategy as well. The biggest change was when BlockFi changed their lending rates nearly a month ago. Which resulted in me taking most of my bitcoin off of their service. But they just recently lowered their rates even further. With the rumors surrounding BlockFi and also with the rates there becoming less attractive, I have decided to take all of my funds off the service. This has caused me to begin a search for a new home for my crypto lending. I have been experimenting with Celsius, Nexo, and also Ledn. It will take some time to decide which service I enjoy the most.

As usual; the main areas of focus for me to earn crypto income this month were by lending bitcoin, staking ethereum, and also blogging.

So without further delay, let's look at how I did during the month of April. 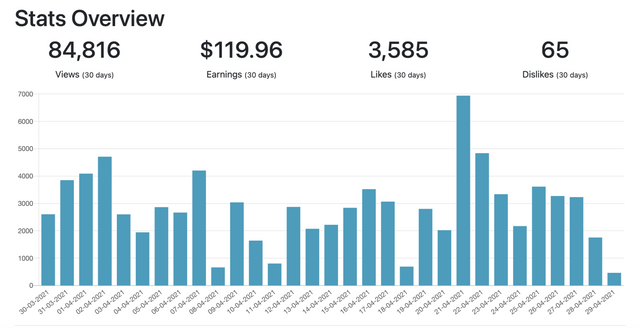 Publish0x remains to be one of my consistent places to earn a cryptocurrency income. During the month of April I made roughly around $120; which is about my monthly average recently. The reason why this is even more impressive is the fact that I wrote less articles during the month of April than I usually do. This means that my articles were performing even stronger than usual. I attribute this to the fact that my follower number has been growing very steadily now at nearly 3,000. I hope to reach 5,000 before the end of the year.

For everyone new to publishing articles on Publish0x. Don't give up, the longer you do it and also build up your follower base; the easier it becomes. I also try hard to not over saturate the website with my articles. I find that my posts perform better when I spread them out consistently, rather than posting every day; or even multiple times a day. It is something to consider. I'm excited for the potential future growth that Publish0x will see, especially if the bull market continues.

Read.cash continues to surprise me. It was a platform that I was almost ready to give up on about half a year ago, but it has become one of my most steady income earners. And sometimes my posts perform best over there. I like the fact that you can withdraw your earnings anytime you want to, and you can also promote your own articles if you desire to. I'm excited to see how this develops even further in the future.

Hive / LeoFinance
As far as my "regular" blogging goes this month; HIVE and LeoFinance were my greatest source of income. The interesting thing about this is that only one or two of my posts really performed well; while a majority of the others didn't find very much traction. This platform clearly offers the highest amount of potential for my future income potential. If I am able to have my articles take off just a little more consistently; I expect these numbers to at least do a 3X from what I did this month; if not more.

Uptrennd
My articles have been performing very well on Uptrennd recently, but I still choose not to even withdraw any of the 1up that earn over there. The reason for this is that the minimum withdrawal is quite high, and then the transaction fee if I were to swap it for another coin would make it not worth it for me. So, instead I focus on using the platform to build my brand, and hopefully bring people to my twitter or substack account.

Substack
My experiment with substack continues. It is true that I have not made any money with Substack yet, but that isn't even my intention right now. I am just experimenting with building a community on a page that is only my content, that I kinda own. To my pleasant surprise I have been seeing a steady amount of sign-ups, and I am hopeful for the potential that this could offer.

Bitcoin Freelance Gig
And finally there was a new opportunity for me this month. A bitcoin company asked me to research a topic and write an article for them and they paid me for it. While I won't announce the company, it is one that I'm a big fan of, and think great things will come from in the future. This was a one-time gig that probably won't be re-occurring. But it definitely was awesome to have happen, a great learning experience, and would be happy if an opportunity like this would come to me again.

My bitcoin lending this month was really spread out between many places as BlockFi changing their rates forced me to abruptly change my strategy. I decided to put a large portion of Bitcoin onto Celsius and so far it has been going great. Because I'm a USA citizen, I am able to earn a 6.20% interest rate on up to 2 bitcoin there. So I deposited 2 BTC onto Celsius and withdraw the interest to other services; to maintain a level at 2 BTC there. I really like Celsius a lot. I have been enjoying the weekly payouts, instead of monthly. Also, they offer free withdrawals at anytime. I highly recommend it.

My fallen king. BlockFi used to be my preferred place to lend my bitcoin, but I no longer felt comfortable keeping my funds there, and especially since they lowered the rates significantly. While last month I took 2 bitcoin off of BlockFi, and sent it to Celsius. I did keep a small amount still on BlockFi, and had been depositing my Celsius BTC interest onto BlockFi. Because they lowered the rates again starting in May, I will move most of these funds to Ledn. While it's most likely that all bitcoin lending services will eventually lower their rates. There is still time to take advantage of high rates. After all, the interest you earn today could someday be thousands of dollars or more.

I just began depositing Bitcoin onto Nexo and Ledn at the end of the month making the interest earned so small that it wasn't worth even putting the amount on here. But that will change next month. I'm planning to put a much higher amount of BTC on Ledn starting in May.

I continue to stake a small amount of Ethereum on Kraken into the ETH 2.0 protocol. While not a huge amount, it is bringing me a nice amount of ETH each month. Especially with the price of Ethereum doing very well recently. While the future of custodial crypto lending up in the air, the ability to stake your ethereum offers a great way to make a consistent passive income that is much less risky. I am looking to add even more ethereum to increase this passive income source.

I'm thrilled with how the month of April turned out. I am nearly 70% of the way towards achieving my monthly goal. Although next month I most likely won't have any freelance gigs so the number could drop. But if bitcoin would go up in value that would increase my earnings even further. I would also like to mention that this was the first month that my cryptocurrency writing performed better than my lending/staking. It will be interesting to see how that turns out the next few months. My areas of focus continue to be writing, lending and staking.

How about you? How is your crypto income journey going? What things have worked well for you? And what are your goals?