We've all seen charts just like this one, but this one is not the one you thought it was

If you were around back in 2017 you saw all sorts of moon shots, it was the norm in altcoin land.

You could have thrown a dart at coinmarketcap and hit an altcoin that went up like 100x.

This chart though, it's not a shitcoin from 2017, it's something else: 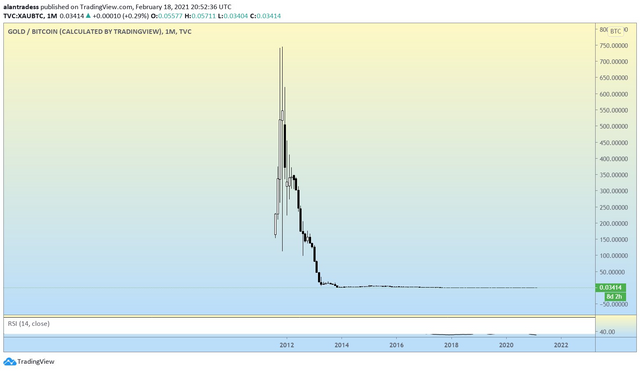 It once did well, and then it completely died. That's right, it's ded.

Sure it's trading around $2k an ounce, but in terms of bitcoin, which is what everything is going to be priced in eventually, it's already died.

We've already had the funeral, the eulogy has been read, and the heirs have inherited what's left.

This isn't a back from the dead story either, it's bitcoin came, bitcoin conquered, gold died.

I had a suspicion that the chart looked something like this, but even I didn't expect it to be this tragic.

Even with the big rally gold had back in 2020, it doesn't even register on that chart due to bitcoin blowing it out of the water.

Even when gold does well, bitcoin does better.

Poor Petey, at least it makes for a good paper weight!