How crazy have the last two years been?

Well, not even last two years, It's basically just been the last 11 months.

From a 1 in a hundred year pandemic, to massive stimulus and money printing, to all the crazy political stuff to the massive surge in bitcoin.

One could argue the surge in bitcoin was just a symptom of the other problems mentioned above, which I could get on board with.

Adding to that craziness is how a United States Senator is really pushing bitcoin, this being the latest: 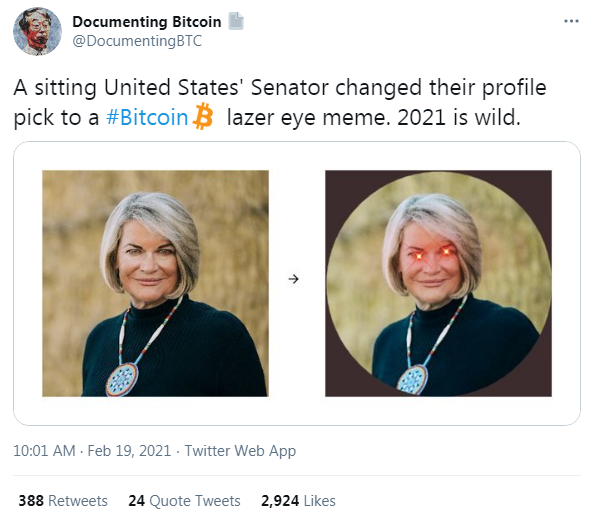 That's the Republican Senator from Wyoming who has quickly become bitcoin's loudest voice in Congress.

Who would have thought we'd see a US Senator actively promoting bitcoin like this?

I sure wouldn't have!

On another note, I have been talking a lot about how bitcoin is coming for gold, but actually it's going to be silver who gets goggled up first.

At this pace we may pass silver's market cap in a matter of weeks:

I actually like silver a lot more than I like gold, so don't start thinking I am bashing silver here.

Silver has major industrial use cases while gold as very few.

There is a lot more store of value premium priced in gold currently compared with silver.

Who would have thought at the start of 2020 that we'd have US Senators promoting bitcoin, a once in a century pandemic changing the world, and bitcoin eating up silver and gold?

I sure wouldn't have!