Remember when Bitcoin was in a bear market a couple weeks ago? Me too

Remember when CNN called for Bitcoin to be in a bear market after it dropped 20%?

In their defense, technically anytime anything falls by 20% from it's highs it is said to be in a bear market.

However, in reality it sort of looks pretty silly when you see stuff like this: 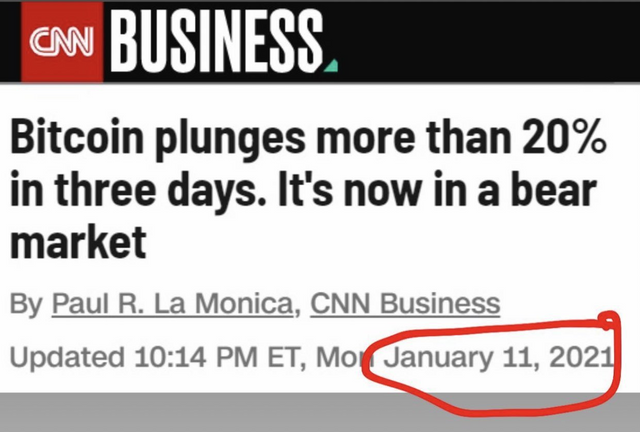 And then a few weeks later it's almost double the price, and breaking through $50k.

Yea, it seems like a long time ago now, but the price dropped as low as $29k before surging to $50k.

I was a dip buyer and hopefully you were too.

The next local peak probably is still $10k or more from this level.

What can we learn from that sort of media reporting?

Basically when you see articles start coming out about how we are in a bear market, it's probably time to buy.

The last dip was about 31%, so maybe wait a few days after we get those $20 drop headlines, and then load up.

These guys have to be getting tired of being wrong!